“How can the PEMC or the ERC recalculate on the basis of a failed market? It was abuse of market power not just market failure. Who manipulated the under-offering that led to market failure? They must be held accountable and should be the one to pay, not the people.” – Bayan Muna Rep. Neri Colmenares

MANILA — Amid public uproar and protest actions over Meralco’s historic, questionable rate hike, it announced a newly recomputed rate increase based on the also recomputed prices of generated power particularly those traded under the WESM (government-run Wholesale Electricity Spot Market).

Meralco’s announced rate hike is now “P0.27/kWh from P3.44/kWh for the December bill and P0.45/kWh from P4.56/kWh for the January bill,” as Meralco senior vice-president and chief finance officer Betty C. Siy-Yap reportedly said at the sidelines of a Metro Pacific Investments Corp. (MPIC) investors’ briefing. Meralco is owned by MPIC. (The P17.2 billion [$383.7 m] profit of Meralco for 2013 contributed to more than a quarter of MPIC’s profit that year.)

Based on statements of consumers’ group POWER alliance and various progressive groups, Meralco’s rate hike should not be imposed yet. They cited first the need for public hearings and scrutiny. And, on top of that, they said it is a rate of increase that resulted from recomputations by the same players in the power industry – chiefly Meralco, ERC (Energy Regulatory Commission), PEMC (Philippine Electricity Market Corp.) and WESM — who still have to be held accountable for their seeming collusion that had resulted to market failure and abuse of market power.

Bayan Muna Rep. Neri Colmenares asked: “How can the PEMC or the ERC recalculate on the basis of a failed market? It was abuse of market power not just market failure. Who manipulated the under-offering that led to market failure? They must be held accountable and should be the one to pay, not the people.”

The historic rate hikes that were recomputed due to public uproar stemmed from the still uninvestigated market failure where the price of generated electricity (for last November to December) became artificially and unprecedentedly high due to bidding manipulation at the spot market. Were it not for protests, these power corporations could have gotten away with it, critics said, as government regulators “failed to do their jobs.”

The bidding manipulation, according to the Makabayan bloc, included Meralco’s supplier, Therma Mobile, which issued the maximum bid price of P62/KwH ($1.38) at the WESM as Malampaya went on a scheduled maintenance shutdown. At the same time, there was the seemingly coincidental underoffering of available power by other capable bidders at the WESM, prompting the dispatch of electricity based on the maximum bid price of P62 ($1.38). This is one of the key assertions of the Makabayan bloc in its petition asking the Supreme Court to issue an injunction against the resulting historic rate hike imposed by Meralco last December.

The December rate hike had been issued a TRO, and since then, the government has tried to dampen public protests by lowering the maximum bid cap in WESM to P32 ($0.71) from P62 ($1.38), by making the ERC “investigate” and by ordering the PEMC to recalculate power prices. Meralco, meanwhile, has slashed its rates by some centavos for two months in a row this year, and announced a lower than its previously demanded rate hike for the Nov.-Dec. months that are under question. 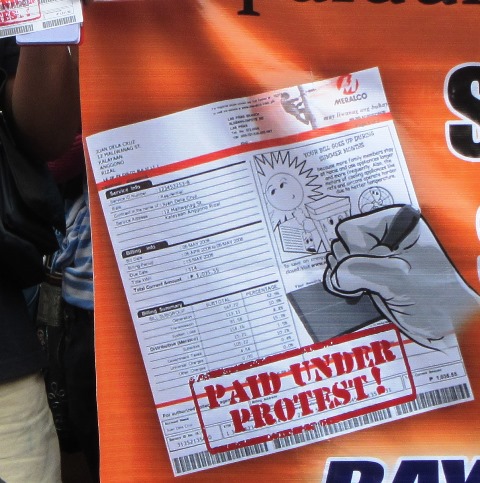 Still, Meralco continued to profit from its power distribution, and its profits remained in its pocket as it had collected its December rate hike from majority of its customers (more than 80 percent of customers, to the tune of at least P5 billion [$111.5 m], according to Rep. Colmenares).

The electric company has not refunded its customers yet, despite the TRO being in place for more than two months already.

According to POWER Convenor Teddy Casiño, “we have to see how PEMC and Meralco arrived at these new rates which supposedly removed the WESM price spikes as a factor.”

The Philippine Electricity Market Corp. (PEMC) has reduced, a few days ago, the WESM prices for the November and December supply months, and as a result, it said Meralco’s rate hikes would likely be cut to P2.43/kWh and P3.02/kWh, respectively, for December and January.

The PEMC-announced rate hike last Monday (March 17) proved higher than the Meralco’s announced hike later (March 18). Bayan Muna Rep. Neri Colmenares said the “confusion” regarding the recomputation of the power rate hike for December and January done by the Philippine Electricity Market Corporation (PEMC) and the Energy Regulatory Commission (ERC) stems from the fact that the PEMC is composed of generation companies and they would, of course, minimize their losses.

“This is the reason why their supposed computation is still high, while on the other hand the ERC is trying to save face regarding this issue so its computation is just a P0.48 centavo increase for December and P0.49 centavos for January,” the senior deputy minority leader from Makabayan bloc said.

POWER Convener and former Bayan Muna Rep. Teddy Casiño said that “In the first place, we have to see how PEMC and Meralco arrived at these new rates which supposedly removed the WESM price spikes as a factor.”

Casiño said the ERC should ascertain whether the increased fuel cost due to the Malampaya shutdown was “fair and reasonable.”

“The rate cannot be imposed because it should first pass through a hearing with the ERC to give the people a chance to scrutinize it and oppose it,” said Rep. Colmenares. He added that “The temporary restraining order (TRO) of the Supreme Court (SC) must also be respected and until it decides, these computations of increases cannot be imposed.”

In a March 19 joint protest caravan to various government agencies and branches of Meralco by consumer groups, POWER! Metro Manila, #StrikeTheHike Network and Bagong Alyansang Makabayan (Bayan), they urged President Benigno “Noynoy” Aquino III to implement “an immediate and pro-people refund scheme of the power firm to its 5.3 million costumers.”

They also challenged Malacañang to impose grave sanctions on Meralco over “its attempt to bypass the existing Temporary Restraining Order (TRO) from the Supreme Court” after Meralco indicated its proposed rate adjustment in its February and March electric bills.

‘As events unfold, it is getting even clearer that there is indeed a collusion between Meralco and the Aquino government in passing on the burden to Filipino consumers in the form of high price of electricity,” said Raymond Palatino, POWER! Metro Manila spokesperson and Metro Manila chairman of Bayan. He cited the government inaction on Meralco’s imposition of price hikes as proof that his government is “accessory to the crime of robbing the money of power consumers.

The joint caravan of power rate critics said in their statement that “Electric consumers are set to continue our initial victories in the battle against power rate hike.”

Calling the Supreme Court’s TRO and the refund victories as “tactical victories” because power rates remain high, the group vowed that the caravan was just the start of “a series of massive protests” against Meralco’s rate hike, overcharging, and ultimately, against the law that allowed it to happen, the EPIRA.