“If the Aquino administration is only after the accumulation of prisoners [among NDFP consultants] and does not want to address the roots of the armed conflict, then President Benigno Aquino III would be held liable by the Filipino people for killing the peace talks.” – Luis Jalandoni, NDFP panel chairman

MANILA – Alleged top leaders of the Communist Party of the Philippines (CPP) Wilma Austria and Benito Tiamzon were just the latest consultants of the National Democratic Front of the Philippines (NDFP) who were arrested and detained under the Aquino administration.

Following the arrest of the Tiamzon couple and five others on March 22, the NDFP condemned this as a violation of the Joint Agreement on Safety and Immunity Guarantees (Jasig). Jasig is one of the ten major agreements signed by both the GPH (then referred as the Government of the Republic of the Philippines or GRP) and the NDFP to facilitate the peace talks.

The NDFP has raised similar criticisms when scores of its consultants in the peace talks were arrested and detained.

Tirso Alcantara was arrested Jan. 4, 2011 in Lucena City, Quezon. The following month, on the eve of the resumption of formal talks in Oslo, Alan Jazmines was also captured in Baliuag, Bulacan. Renante Gamara and a companion were nabbed in Metro Manila, April 3, 2012. One month after, Jaime Soledad was arrested in Inopacan, Leyte. Loida Magpatoc was arrested on July 28, 2013 in Digos City, Davao del Sur. They are among the 16 NDFP consultants detained in different jails all over the country.

Jasig remains in effect unless either party issues a written notice of termination. Safety and immunity guarantees are rendered inoperative 30 days after the issuance of such notice. 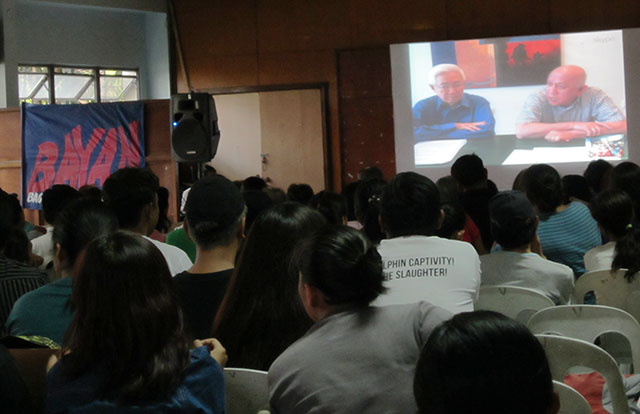 Fidel Agcaoili, NDFP panel vice chairman, said the GPH has not issued any formal notice of termination even as it wantonly violates Jasig and other previous bilateral agreements. He added that former president Joseph Estrada had at least the decency to issue a formal termination of Jasig and the peace talks.

“The GPH panel under Aquino does not have the courage to issue a formal notice. They [GPH panel members] are just mouthing that they are still interested in the peace talks and putting the blame on the NDFP for the impasse,” Agcaoili said in the same forum via Skype.

Pastores added the charges filed against her clients are “clearly fabricated.”

“The charges are absurd if not hilarious,” Pastores said in Filipino.

She cited the Hilongos multiple murder charges filed against the Tiamzon couple and several others in connection with an alleged mass grave found in Inopacan, Leyte.

“It is a case of traveling skeletons,” Pastores said.

In July 2000, a complaint for multiple murder was filed against 25 alleged New People’ s Army (NPA) guerrillas in connection with the alleged mass grave found in Monterico village, Baybay Leyte. On January 10, 2005, the case was dismissed due to insufficient evidence.

“Six years later, multiple murder charges were filed in connection with another alleged mass grave in another town, in Inopacan,” Pastores said.

In its petition filed before the Supreme Court on the case, the lawyers said, “Five of the victims, whose skeletal remains were allegedly found in Monterico village, Baybay, Leyte on June 27, 2000 were the same alleged victims in the Hilongos case, whose skeletal remains were allegedly found on August 26, 2006 in Mt. Sapang Dako, Inopacan, Leyte.”

Pastores added that the public prosecutor, Rosulo Vivero, who dismissed the Baybay mass grave case is the same prosecutor who found probable cause for multiple murder. “Could it be that prosecutor is suffering from amnesia?”

The PILC lawyer also said that of more than 40 cases filed against Alcantara, none has sufficient evidence. In one of the murder charges, Pastores said a witness alleged that after an ambush staged by New People’s Army (NPA) guerrillas against the military, he heard the rebels shout, ‘Long live Ka Roger! Long live Ka Bart!’ “There is no statement that Alcantara (also known as Ka Bart) was there during the incident. All of the cases against him are like that,” Pastores said.

Pastores said the Hilongos case is a case of wholesale legal offensive against the NDFP consultants.

Aside from the Tiamzon couple, three other NDFP consultants Vicente Ladlad, Rafael Baylosis and Randal Echanis, Makabayan party’s Satur Ocampo and more than 60 other alleged CPP leaders were implicated.

“If the government plans to detain all the consultants then the prospect for peace talks gets dimmer,” Pastores said.

“If it were a fair fight, we could definitely get an acquittal [verdict] but the fight is far from being fair. This case is political and it necessitates more than a legal battle,” Pastores added.

Luis Jalandoni, NDFP panel chairman, said, “If the Aquino administration is only after the accumulation of prisoners [among NDFP consultants] and does not want to address the roots of the armed conflict, then President Benigno Aquino III would be held liable by the Filipino people for killing the peace talks.”

Agcaoili said the Aquino administration has been clear in treating peace talks as part of its counterinsurgency program Oplan Bayanihan.

“It seeks the capitulation of the revolutionary movement,” Agcaoili said. He said that from the very beginning, Presidential Adviser on the Peace Process Teresita Quintos Deles and GPH panel chairman Alexander Padilla have been trying to undermine the previous bilateral agreements.

Agcaoili branded Deles as “a clerico-fascist and rabid anti-communist” and Padilla “a petty bureaucrat and a willing mouthpiece of the Armed Forces of the Philippines.”

In their statement read during the forum, Austria and Tiamzon said “the biggest obstacle to the peace talks is the overweening arrogance of President BS Aquino.”