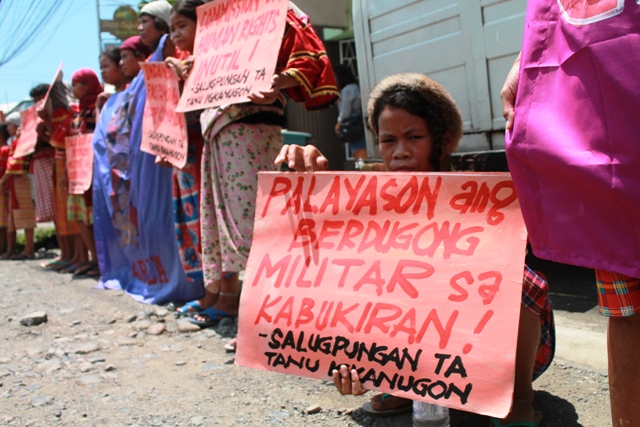 Some 50 Manobo women who were displaced from Talaingod, Davao Del Norte and progressive women’s group Gabriela trooped to the office of the Commission of Human Rights Region XI to protest its inaction on the human rights violations being committed by the military in their community. The CHR, the group said, is ‘inutile and absurd.’

May-Ann Sapar, spokeswoman of Gabriela, said the CHR inutile in protecting the rights of the people especially the poor and underrepresented.

“The usual and flimsy excuse of this agency is, ‘Were there complaints filed?’ It is a robot-like institution. The evacuees have been here for almost a month, yet they did not even investigate. Our taxes are being wasted here,” Sapar said.

According to the group, there are 515 children and 88 newborns currently staying in the evacuation camp provided by the United Church of Christ in the Philippines (UCCP) in Haran. At least 70 percent of the evacuees are women, said Sapar.

“Women and children are the most vulnerable sectors during military operations, but the CHR has not taken the initiative to look into this issue.”