“Task Force Abono, with the blessing of the Aquino administration, consciously maneuvered to absolve Arroyo and her minions from the plunder of the fertilizer fund scam.” – Antonio Flores, Kilusang Magbubukid ng Pilipinas

In a resolution dated May 2, 2014, Ombudsman Conchita Carpio-Morales dismissed the charges against Arroyo for absence of “factual or legal basis.” The resolution stated that there is no evidence to establish that Arroyo had a hand in the disbursement of the said funds.

Antonio Flores, secretary general of Kilusang Magbubukid ng Pilipinas (KMP), asked: “Then who plundered the P728-million fertilizer fund scam? All the accused are at large and many of them still inside the Aquino government,” referring to Department of Budget and Management undersecretary Mario Relampagos and agriculture assistant secretary Ophelia Agawin.

It was the KMP, a national organization of farmers, that filed the plunder case against Arroyo in relation to the fertilizer fund scam ten years ago or immediately after the 2004 presidential elections.

“What’s behind the highly unacceptable acquittal of Arroyo from the fertilizer fund scam? We smell a political quid pro quo between Arroyo and the Aquino government,” Flores said. 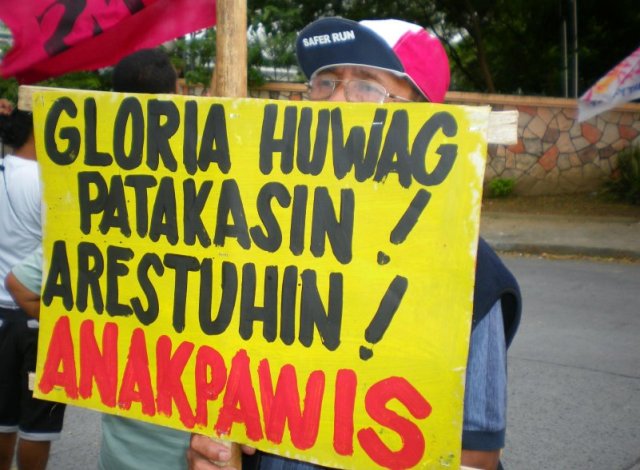 “Task Force Abono, with the blessing of the Aquino administration, consciously maneuvered to absolve Arroyo and her minions from the plunder of the fertilizer fund scam. Task Force Abono did not conduct a genuine investigation nor summon the victims of the plunder scheme, and merely relied on the complaints, and rejected outright the report and recommendations of two Senate committees that really probed the scam,” Flores said.

The KMP recalled that “in Senate Committee Report No. 254 that was submitted to the Ombudsman by the Senate of the 14th Congress, the Senate likened the group of people involved in the Ginintuang Masaganang Ani (GMA) Fertilizer Fund Scam to a wolf pack who was able to rob the government blind.”

The KMP added that “the Senate of the 13th Congress also submitted to the Ombudsman Committee Report No. 54. Like the Senate Committee Report 254, the Senate recommended the filing of charges against Luis Lorenzo Jr., Jocelyn Bolante and other persons for plunder. The Senate in this report stated that strong criminal culpability is established against them.”

Lorenzo is the former agriculture secretary and Bolante is former undersecretary of the same agency.

The peasant group said, “In these committee reports, the Senate made a categorical finding that then President Arroyo must be held accountable for the mismanagement of the fertilizer fund.”

In the 13th Congress, the Senate stated that Arroyo “must be held accountable in the mismanagement of the fertilizer fund and take it upon herself to institute measures to correct the flaws in her administration.”

According to the Senate, “while the Committee found no evidence directly linking the President to the fertilizer scam, the acts of the former Undersecretary of the DA, Mr. Jocelyn Isada Bolante and his cohorts, now Undersecretary Belinda Gonzales and now GSIS Vice President Ibarra Poliquit, are deemed acts of the President since they acted within the scope of their authorities given to them by then Secretary Luis Lorenzo, Jr.”

“Since there was no reprobation or disapproval coming from Arroyo regarding their actions, it can be easily inferred that the President acquiesced to such acts,” the Senate said.

The KMP leader maintained that Lorenzo and Bolante could not have been able to plunder such gargantuan amount and continue to evade all sorts of liability without the acquiescence of Arroyo.

“Despite the recommendation of the Senate and the circumstances obtaining in the release and use or misuse of the GMA fertilizer funds and the complaint of the farmers, Arroyo was not investigated and charged by the Ombudsman for the same charges filed or recommended to be filed against Lorenzo, Bolante, and their cohorts,” Flores said.

In a separate statement, youth group Anakbayan mocked the decision, saying it is “tuwid na daan” at work. “Aquino clearly has no intention of making Arroyo accountable for her crimes,” Anakbayan chairman Vencer Crisostomo said.

Tuwid na daan (straight path) is the rhetoric of the Aquino administration in its supposed battle against corruption.

The youth group noted that before the decision on the fertilizer scam, the Ombudsman dismissed three other cases filed against Arroyo including the P72 million ($1.6 million) in capital gains tax plunder case, misuse of the P530 million ($11.777 million) Overseas Workers’ Welfare Administration, the P1-billion ($22.222 million) Libmanan-Cabusao Dam and Skybridge 1 and 2 projects.??

“The previous Ombudsman was removed because of her inaction on cases involving Arroyo. And yet, the current Ombudsman did the same. This decision of the Ombudsman is a clear manifestation of how injustice and impunity continue to rule under Aquino,” Crisostomo said.

For the Kilusang Mayo Uno, the Ombudsman’s decision points to “Aquinorroyo,” a collusion among the elite against the Filipino workers and people.

“We have every reason to believe that Aquino will do to Arroyo what Arroyo did to Estrada: that is, imprison her for the duration of his term and release her before his term ends. Even in his handling of his corrupt predecessor, Aquino is no different from Arroyo,” KMU said.

The labor center noted that while Aquino has used anti-Arroyo and anti-corruption rhetoric to gain complete control over the government, it is not using such control to go after Arroyo for her numerous grave crimes against workers and all Filipinos.