MANILA — Workers led by national labor center Kilusang Mayo Uno marked the sixth death anniversary of Crispin “Ka Bel” Beltran with a program at the labor leader’s monument in Plaza Miranda, Manila. They were joined during the first half of the program by Manila Mayor Joseph “Erap” Estrada, who brought the city’s music band for the occasion.

Estrada, in his speech, focused his praises of Ka Bel on his incorruptibility, a rare attribute in someone who attained the position of an esteemed labor leader and legislator.

The workers, meanwhile, vowed to continue Ka Bel’s causes. Which is why, they said, they are remembering Ka Bel by protesting the Enhanced Defense Cooperation Agreement (EDCA) and the spate of union busting in the country. 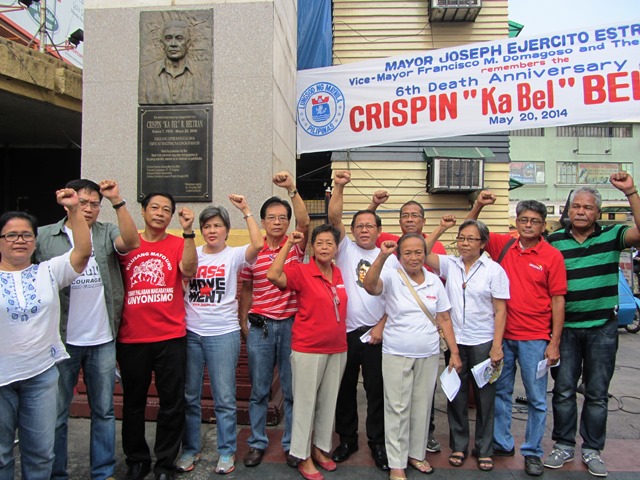 Members of KMU also held a picket today at the main offices of the labor department in Manila, condemning its “complicity” in various cases of union-busting happening in the country today. (Read: Labor dept’s complicity in union busting denounced)

“We remember ka Bel as a nationalist, and a champion of workers’ causes,” said Elmer “Bong” Labog at the program in Plaza Miranda. Carol Pagaduan-Araullo, chairperson of Bagong Alyansang Makabayan (BAYAN), an umbrella alliance of various progressive and sectoral organizations, added that Ka Bel was also a noted internationalist proletariat, and that he led the International League of Peoples Struggle, as well as Bayan, for a long time.

“We have no doubt in saying that if he were alive today, Ka Bel would surely oppose the return of US military bases in the Philippines through the EDCA, and the widespread busting of unions in the country at present. He continues to be a shining example and an inspiration for Filipino workers and the people,” said Labog.

Workers recalled that Ka Bel fought for the expulsion of US bases, the scrapping of the US-RP Military Bases Agreement, and the rejection of the Visiting Forces Agreement (VFA). He was vigilant against abuses committed by US troops.

“National sovereignty and workers’ rights are inalienable concepts for Ka Bel. He devoted most of his life fighting with Filipino workers and the people so that these ideals would be realized,” Labog said. He added that if Ka Bel were alive today, he’d likely lead protests against union busting, such as what’s happening in Pentagon Steel, Hoya Glass, Carina Apparel, NXP Semiconductors.

The KMU believes that Ka Bel would have detested the likes of the regime of President BS Aquino III. 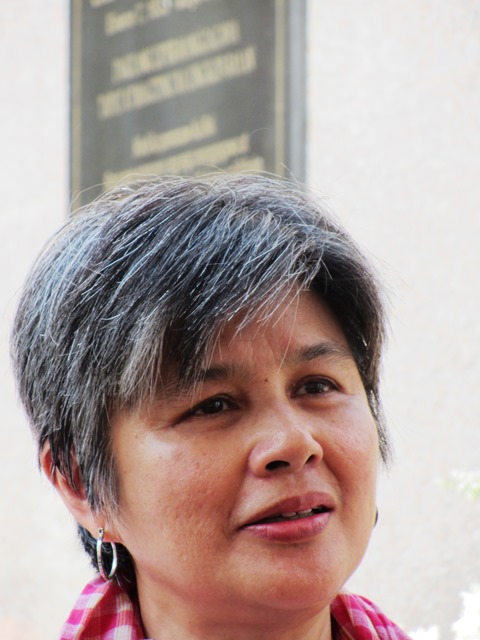 Carol Araullo of Bayan agreed with the KMU theme of remembering Ka Bel via opposing EDCA and union-busting. She warned that the administration’s thrust to change the constitution and implement EDCA will all the more oppress the Filipino people.

Philippine natural resources, land, public utilities, mass media, and even certain small businesses would be shorn of caps or limits on foreign investments, she said. These foreign investments have failed to lift this country out of poverty.

The issue of the Philippines’ stunted economy is connected to the issue of generating decent jobs, Araullo said. Unfortunately, she said in Filipino at Plaza Miranda, “foreign investments invariably come with contractualization, low wages and worst working conditions. Under globalization, foreign investors arrive in countries like the Philippines in search of cheap and oppressed labor,” she explained.

With the EDCA allowing US prepositioning of arms, Araullo warned of greater likelihood of intensified repression, as she forecasts greater participation of US troops not just in the government’s effort to crush the revolutionary New Peoples’ Army through militarization, but also in launching of wars in Asia using the country as one of their staging grounds.

Remembering Ka Bel as an internationalist proletarian leader, Araullo expressed hopes his concepts would live in us.

Singer-songwriter Gary Granada sang two original songs that elicited cheers from the gathered friends of Ka Bel. One of his songs is entitled “Bahay” (House). It tells of how “experts” agreed that the hodge-podge of scraps providing shelter to millions of urban poor are called ‘houses.’ His next song tells about the non-existent signs of economic development which the government habitually reports to the people. 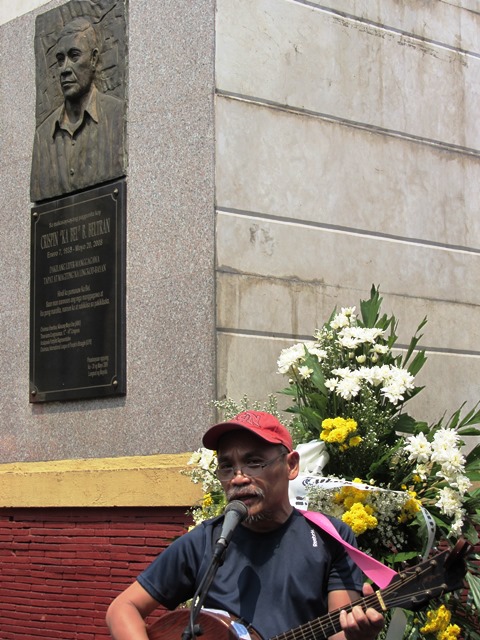 Anakpawis Rep. Fernando Hicap then recalled the six years in which Ka Bel was a progressive legislator, first with Bayan Muna, and then with Anakpawis Party when it started to join the partylist election in 2004. He said that despite the Congress being dominated by big landlords and capitalists, Ka Bel almost served a total of three terms (but for his untimely death six years ago). During his time in Congress, Ka Bel advanced resolutions and proposals representing demands of the workers and peasants, such as the proposal to hike workers’ wages by P125, and public sector employees’ wages by P6000 per month.

Hicap recalled that the GARB (Genuine Agrarian Reform Bill), which Ka Bel helped to author, is “so vastly different from the current land reform law – because all agricultural land are to be covered and freely distributed to the landless.”

Amid increasing prices of electricity, Hicap also recalled one of Ka Bel’s popular pictures – ironing his barong for Congress using a coal-heated iron. Ka Bel famously opposed the Purchased Price Adjustment (PPA), which is generally a fight against the Epira, said Hicap.

In the end, Danilo Ramos of Kilusang Magbubukid ng Pilipinas prayed that the inspiration provided by Ka Bel would remain alive as a weapon in those continuing to work and struggle for meaningful change.