In the past months, more than a hundred hectares of land in the villages of Balete and Cutcut were bulldozed and reclaimed by security guards of the Cojuangco-Aquinos.

MANILA – Six hectares of palay, vegetables and other crops were destroyed in Maligaya, Mapalacsiao village in Hacienda Luisita, July 3.

In a phone interview, Francisco Dizon, a leader of the Alyansa ng Magbubukid sa Asyenda Luisita (Ambala), told Bulatlat.com that a certain Atty. Narciso who introduced himself as a lawyer from the Department of Agrarian Reform (DAR) talked to some 20 farmer-beneficiaries at 5 a.m. yesterday. The said farmers, said Dizon, got hold of photocopies of the certificates of land ownership award (CLOA) from the DAR.

At around 7 a.m., Narciso and some 20 farmers, accompanied by 20 local policemen, proceeded to Maligaya subvillage. One of the farmers, on board a tractor allegedly owned by Virgie Torres, flattened six hectares of rice field, vegetables and banana trees. 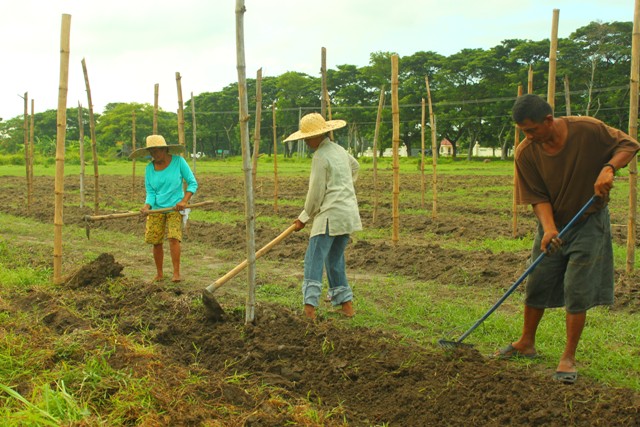 Dizon accused Torres of being one of the dummies of the Cojuangco-Aquinos who leased almost 200 hectares of land from the farmer-beneficiaries. Dizon said that based on the reports gathered by Ambala, Torres, through the aryendo system, paid the farmers P7,000 ($155) per year for a three-year lease.

“They are dividing the Hacienda Luisita so that the Cojuangco-Aquinos would regain control over the land,” Dizon said.

Dizon said that aside from Torres, former chief of the Land Transportation Office (LTO), other allies of President Benigno Aquino III ‘act as dummies of the Cojuangco Aquinos through the aryendo system.’

Dizon identified Rep. Noel Villanueva as having control over lands in Pando and Mabilog villages, Arsenio Valentino in Asturias and Lourdes villages and Edgar Sumat in Bantog village.

In a previous statement, the Ambala said the Cojuangco-Aquino family “made steps to sabotage the farmers’ land cultivation and established the Luisita Estate Management (LEM) group of financier-dummies to either assert the Cojuangco’s claim over agricultural land or broker lease agreements with farmers.” Large tracts of lands that had been occupied by the farm workers were replanted to sugar cane.

The DAR’s sugar block farming, the group asserted, fits well into the Cojuangco-Aquino clan’s moves to wrest control of the land.

The Ambala said the DAR, instead of implementing the high court’s decision, has been acting in favor of the Cojuangco-Aquinos.

On April 25, 2012, the Supreme Court ordered the distribution of Hacienda Luisita, controlled by the clan of President Benigno Aquino III for more than five decades, to farmer-beneficiaries.

The DAR never recognized the tillage campaign initiated by the Ambala in 2005 and refused to heed the Ambala’s demand for collective ownership of land, which is allowed under the Comprehensive Agrarian Reform Law.

The Ambala said the DAR’s raffle system of land distribution from July 18- August 21, 2013 was “pre-determined and designed to justify the Cojuangco-Aquino’s claim to more than a thousand hectares of agricultural land mysteriously excluded by the DAR from land distribution.”

In the past months, more than a hundred hectares of land in the villages of Balete and Cutcut were bulldozed and reclaimed by security guards of the Cojuangco-Aquinos.