“The president is overtly asking Congress to legislate his version of the DAP story, in effect urging the Legislature to join forces with the Executive Branch in defying the third branch of government.” – Kabataan Partylist Rep. Terry Ridon

MANILA – Not only did President Benigno Simeon Cojuangco Aquino III defend the controversial Disbursement Acceleration Program to the hilt during his fifth State of the Nation Address (SONA), he also issued marching orders to institutionalize it.

This was the view of former Bayan Muna Rep. Teddy Casiño and Kabataan Rep. Terry Ridon.

Aside from asking for a supplemental budget, Aquino also proposed the passage of a Joint Resolution that will bring clarity to the definition of certain budgetary terms.

“They want to institutionalize the DAP through the redefinition of savings,” Casiño said in a press conference, July 29. 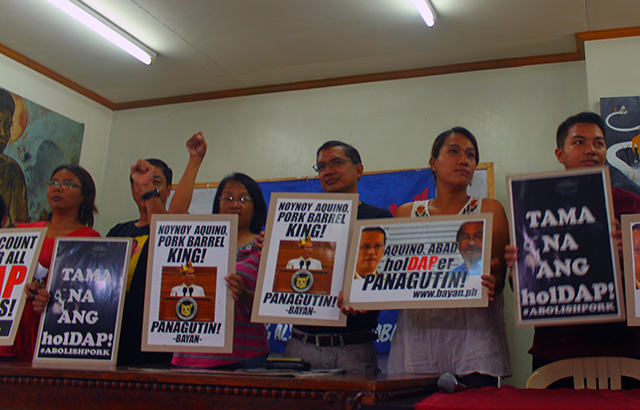 Ridon said the joint resolution Aquino is asking for would enable a change in the definition of such budgetary terms like ‘savings.’ This is a clear challenge to the Supreme Court’s decision on the DAP.

In its decision July 1, the high court declared specific acts of the DAP unconstitutional.

Ridon said the President wants to adopt the definition of savings from the DAP – which includes unobligated allotments and unreleased appropriations prior to the end of the fiscal year.

In its ruling, the high court stated that unreleased appropriations and withdrawn unobligated allotments under the DAP were not savings, and the use of such appropriations contravened Section 25(5), Article VI of the 1987 Constitution.

Casiño said the joint resolution would give Aquino a free hand to amend the GAA. Casino added that this is dangerous for the check-and-balances in government and to the separation of powers of the three branches of government.

Ridon warned that a constitutional crisis could arise from this. “The president is overtly asking Congress to legislate his version of the DAP story, in effect urging the Legislature to join forces with the Executive Branch in defying the third branch of government,” Ridon said.

A joint resolution passed by both chambers of Congress has the force of law once signed by the president.

A constitutional crisis is a situation wherein separate branches of government disagree about the extent of each branch’s power, usually arising from a dispute on the interpretation of certain provisions of the Constitution.

Ridon said that if Congress abides by the President’s request – which is not far from happening – the joint resolution would just be struck down by the Supreme Court, resulting in a spiraling contest of powers between the three branches of government.

Renato Reyes Jr., secretary general of Bagong Alyansang Makabayan (Bayan) said Aquino used the SONA as a platform to justify the DAP and to send a clear message to Congress that the impeachment complaint should be junked.

Still, Reyes said Bayan would continue campaigning for the impeachment complaint. Three impeachment complaints have so far been filed against the President – the first two were in relation to the DAP and the third was for the signing of the US-PH Enhanced Partnership Cooperation Agreement.