Given the supposed numbers of Aquino allies in Congress and the all-powerful sway of pork barrel that continues to exist in public funds, impeaching Aquino is “a daunting task,” Rep. Terry Ridon of Kabataan Partylist admitted. But, he said, they are prepared to fight, anyway.

MANILA — After the Supreme Court finally declared certain provisions or specific acts of the DAP (Disbursement Acceleration Program) as unconstitutional today, July 1, progressive lawmakers announced that they are planning to file an impeachment complaint against Pres. Benigno “Noynoy” Aquino III. In a statement, Kabataan Partylist Rep. Terry Ridon said the next step would be to ensure that President Benigno Aquino III and Budget Sec. Florencio Abad will be held accountable for having invented and abused the said fiscal program.

Given the supposed numbers of Aquino allies in Congress and the all-powerful sway of pork barrel that continues to exist in public funds, impeaching Aquino is “a daunting task,” Rep. Ridon admitted. But, he said, they are prepared to fight, anyway.

Rep. Ridon said the Supreme Court’s ruling on DAP is a “solid ground” for culpable violation of the Constitution and betrayal of public trust, both of which are impeachable offenses. “It will greatly bolster the case against President Aquino,” the lawmaker said.

Meanwhile, the progressive peoples’ organizations, including the Kabataan Partylist, continue to urge the public to join protest actions not just against DAP, but against the entire pork barrel system of which DAP is just one of the bigger slices.

Aquino stopped the implementation of the DAP in 2013 following public outrage over the pork barrel system, but officially, their stated reason for stopping it was that they have achieved the desired progress aimed in the “acceleration” of fund disbursement.

The DAP came under fire last year after several opposition senators revealed these funds were used as “incentives” for legislators who supported the impeachment of former Chief Justice Renato Corona in 2012.

Despite the Aquino government’s withdrawal of DAP, followed by the filing of a counter-petition in the Supreme Court asking it not to deliberate on the DAP anymore as they had already stopped it, the SC still proceeded to give its ruling. That is to avoid the possibility that another one like DAP “may be used in the future,” Fr Rahilio Aquino, dean of San Beda Graduate School of Law, said in a news program aired this morning at DZMM.

In a statement read today at the Supreme Court, SC spokesperson Theodore Te announced that the Court is “partially” granting the petition/s for certiorari concerning the DAP. Nine petitions against the DAP had been filed at the Supreme Court. Progressive groups held picket protests in front of the High Court asking it to declare DAP as unconstitutional, and at the same time, warning the court against siding with the Aquino administration.

The Supreme Court said the following are some of the salient acts under DAP which they found unconstitutional:

• cross-border transfers of the savings of the Executive department to augment the appropriations of other offices outside the Executive; and

• funding of projects, activities and programs that were not covered by any appropriation in the national budget.

Te concluded in his statement that “The court further declared as void the use of unprogrammed funds despite the absence of a certification by the National Treasurer that the revenue collection exceeded the revenue target for non-compliance with the conditions provided in the relevant General Appropriations Act.”


Prior to the issuance of the decision, the Supreme Court was rumoured to have been under pressure from the Aquino government, as declaring DAP unconstitutional would make Aquino vulnerable to impeachment. It has been recently bared that Aquino’s appointees at the Supreme Court leaked a supposed draft of its decision on the DAP (which supposedly said it is constitutional) to the Social Weather Stations (SWS) in order to measure public reaction to the delayed decision.

Now that the SC had found only parts and not all of DAP unconstitutional, protesters warned against other efforts to excuse President Aquino from accountability.

Rep. Ridon of Kabataan Partylist said they have always been certain about the unconstitutionality of the DAP. Aside from progressive lawmakers and peoples’ organizations, a broad array of groups and personalities including Constitutionalists have also previously declared DAP as “clearly unconstitutional.”

Now, making those who orchestrated it and benefited from it accountable are the next big steps to take, based on the initial statements of the groups who criticized DAP. The Commission on Audit will now be expected to investigate what happened to the DAP funds, for example. Bayan Metro Manila and #ScrapThePork Alliance told President Aquino in a noise barrage after SC announced its decision on DAP that the president must return to the national budget the P142-billion DAP it allotted to various projects.

“The funds disbursed under DAP must be returned, or accounted for, Fr. Ranhilio Aquino, dean of San Beda Graduate School of Law, also said in Filipino. Similar to what constitutionalist and priest Joaquin Bernas said last year, Fr. Ranhilio Aquino said the DAP’s unconstitutionality is basis for (Aquino’s) impeachment, but that could be “improbable” given “the numbers” in Congress.

Under the 1987 Constitution, a vote of one third of the House of Representatives is needed to impeach the president.

In a statement, Rep. Ridon said his group, along with other youth organizations including YOUTH ACT NOW, is unfazed by the sheer dominance of Aquino’s allies in both houses of Congress. One of the petitioners in the SC against the DAP, Rep. Ridon said his group will be readying all necessary charges against officials involved in the implementation of the DAP. In fact, last October, he had filed House Resolution 359 urging the House Committee on Appropriations and the Committee on Good Government and Public Accountability to investigate the DAP. 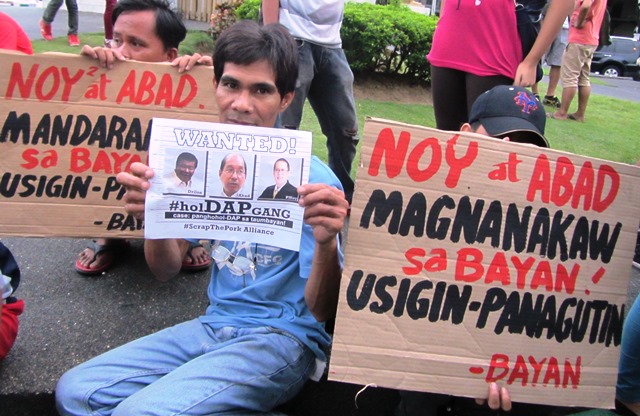 With the SC decision, Rep. Ridon said Abad can be charged with malversation of public funds, at “the bare minimum.”

The maximum penalty for the said crime is life imprisonment.

“Abad clearly committed malversation in crafting and implementing the multibillion peso DAP. We will file the appropriate charges against him at the soonest,” the party-list lawmaker said. Like the three senators and other personalities and politicians involved in the pork barrel scam, “President Aquino, Secretary Abad and others involved in creating and implementing DAP should all be held accountable,” said Mark Louie Aquino, secretary-general of Bayan-Metro Manila. Aquino also reiterated their longtime demand for the total abolition of the DAP and the presidential pork which are lump sum and discretionary in nature.

In another statement, Ridon of Kabataan Partylist urged the public to help “make this arrogant administration accountable for implementing an illegal scheme that only served to further the administration’s political motives and perpetuate political patronage in government.”