Counterhegemony: 12 Reasons to save the national language

Filipino subjects have been obliterated through Commission on Higher Education/CHED Memorandum Order (CMO) No. 20, Series of 2013. Hence, instead of celebrating this year’s National Language Month (Buwan ng Wikang Pambansa), everyone is requested to help turn the tables against the enemies of our beleaguered national language.

The Philippines holds the disreputable distinction of being the only country in the world where the national language is extoled for a month, only to be dismissed as a nuisance unworthy of recognition as the official language of communication and primary medium of instruction. Some citizens – victims of what Renato Constantino labeled as (neo)colonial “miseducation” – even have the gall to demand the use of English language or a regional language, as the country’s language of communication and medium of instruction, despite the fact that Filipino has been the national language since 1935! Worse, Filipino subjects have been obliterated through Commission on Higher Education/CHED Memorandum Order (CMO) No. 20, Series of 2013. Hence, instead of celebrating this year’s National Language Month (Buwan ng Wikang Pambansa), everyone is requested to help turn the tables against the enemies of our beleaguered national language. Allow us to enumerate a few compelling reasons why Filipino should be used as medium of instruction in college and why Filipino subjects must be included in the college curriculum

1. Filipino as medium of instruction at all levels is a mandatory provision of the Philippine Constitution (Article XIV, Section 6): “The national language of the Philippines is Filipino…the Government shall take steps to initiate and sustain the use of Filipino as a medium of official communication and as language of instruction in the educational system.” It is thus abominable that most government agencies use English as their main language of official communication, and most universities are still reluctant to progressively implement the Filipinization of the curriculum.

2. Using Filipino as a medium of instruction in college will only be effective if Filipino is taught as a subject/discipline too.

3. In the era of globalization and imminent Association of Southeast Asian Nations (ASEAN) Integration, Filipinos should further strengthen their own language, literature, and culture, as part of our contribution to the project of global and regional socio-cultural integration. For what can we contribute to the global and regional projects of integration if we have no language nor culture to share with the world and ASEAN? 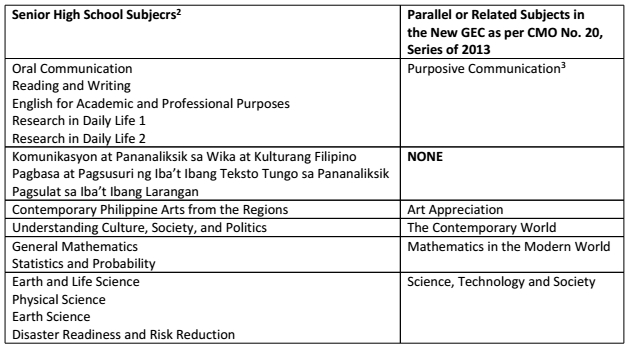 5. Skills for Filipino language and Philippine literature are included in the College Readiness Standards (CRS) contained in CHED’s Resolution No. 298-2011, hence including Filipino language and literature subjects in college is a must, if the CRS is to be genuinely useful. Such subjects will ensure that skills learned in high school will be further developed in college. 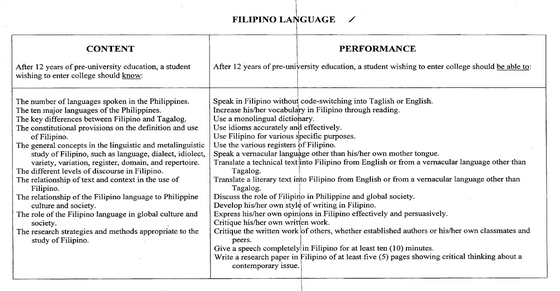 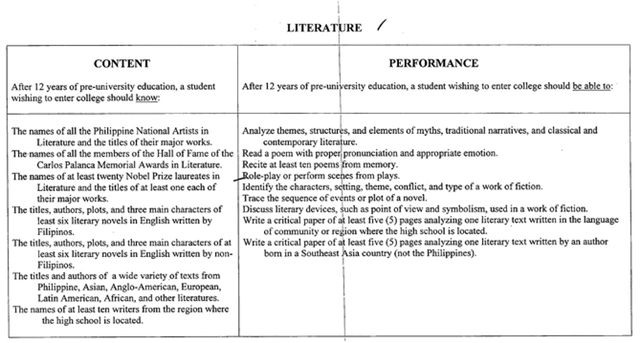 6. The National Achievement Test (NAT) results for Filipino are still below DepEd’s own standards for mastery. Hence, retaining Filipino as a college subject will ensure that the necessary task of improving students’ facility of the Filipino language beyond the secondary level is accomplished. 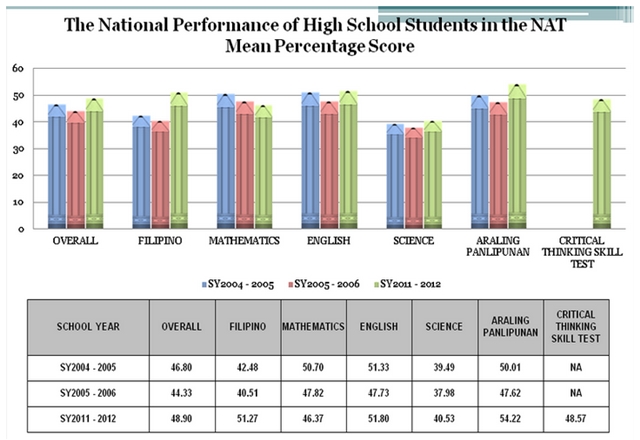 7. The content of the Filipino senior high school curriculum cannot cover all content and skills currently taught in college. (see ANNEX A)

8. Filipino is the national language and language of political democratization as it is spoken by 99% of the population. It is the most effective language of national public discourse. It is the soul of our country’s identity and culture. Giving it some space in all levels of education is a must. Obliterating it is obliterating ourselves and our collective identity.

9. In K to 12 countries such as the United States of America, Malaysia, and Indonesia, national language and/or literature are part of the mandatory core courses in their college curriculum.

10. Filipino subjects designed in a multi/interdisciplinary way are feasible, as proven by the dozens of proposals submitted to CHED by various institutions and organizations.

12. Filipino is a global language taught in more than 80 schools, institutions, and universities abroad (in some cases, full bachelor’s degree and/or master’s degree are also offered). Obliterating the space for Filipino and Philippine Studies at the tertiary level in Philippine colleges and universities will certainly negatively affect the status of Filipino as a global language. 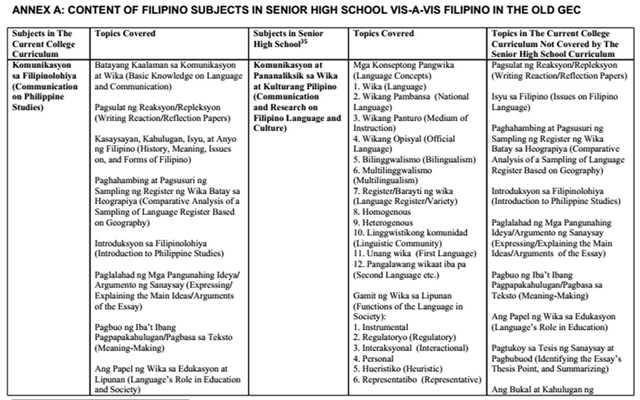 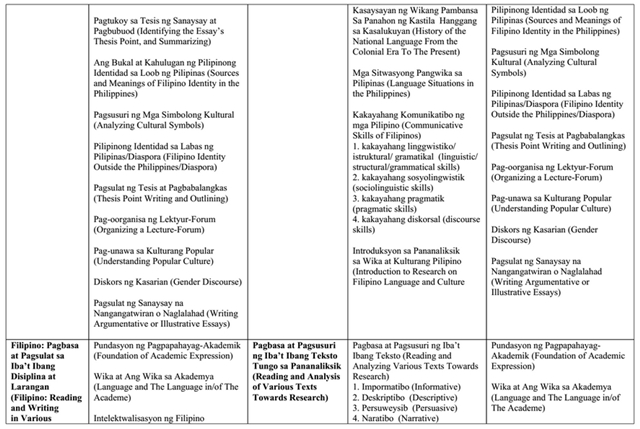 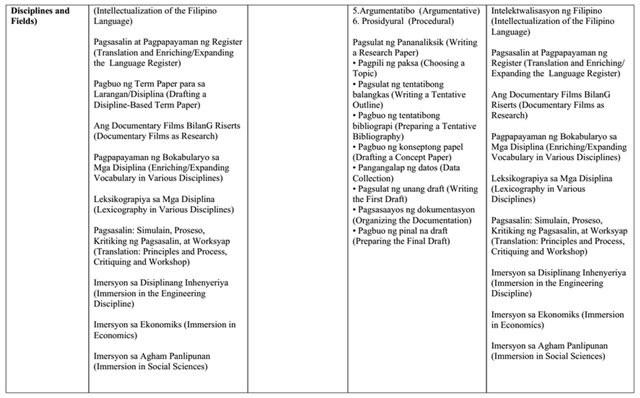 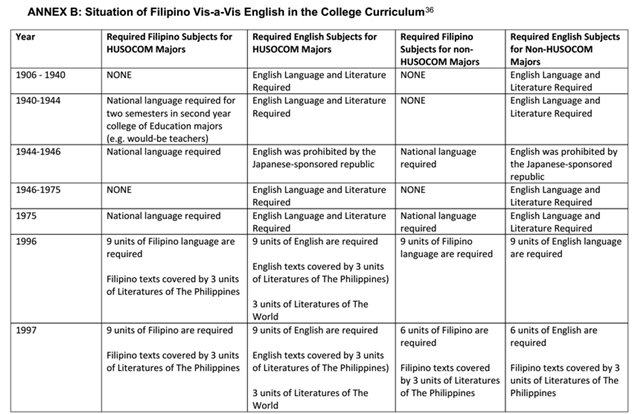