Hiroshima and Nagasaki: no more!

It was the 69th anniversary of the Hiroshima and Nagasaki nuclear bombings last August 6 and 9, respectively. Decades hence, the world continues to be a dangerous place to live in amidst wars and conflicts.

In the Asia-Pacific region, the challenge to the military dominance of the United States by China, an aspiring imperialist nation, is escalating. Both capitalist countries are intent on securing their economic and military interests in the region, particularly in the South China Sea, locally known as the West Philippine Sea.

There are high stakes in these waters. According to the World Bank, South China Sea has proven reserves of at least seven billion barrels of oil and an estimated 900 trillion cubic feet of natural gas. It is also an important trading route, as 50 percent of global oil tanker shipments pass through this area. The South China Sea is also located in the Pacific Coral Triangle, a geographical area known as the marine biodiversity center of the world.

Whoever controls South China Sea is assured of economic power and rich natural resources, making it a primary concern confronting both US and China.

In 2011, the US announced a ‘Strategic Pivot’ of its military, shifting focus to Asia-Pacific and specifically redeploying 60 percent of its air and naval forces to the region by 2020. These include the establishment of military bases and pre-positioning of forces and war materiel in the region to quickly and decisively confront its perceived enemies, whether it is the territorial assertions of China, or revolutionary armed groups like the communist-led New People’s Army (NPA) in the Philippines. 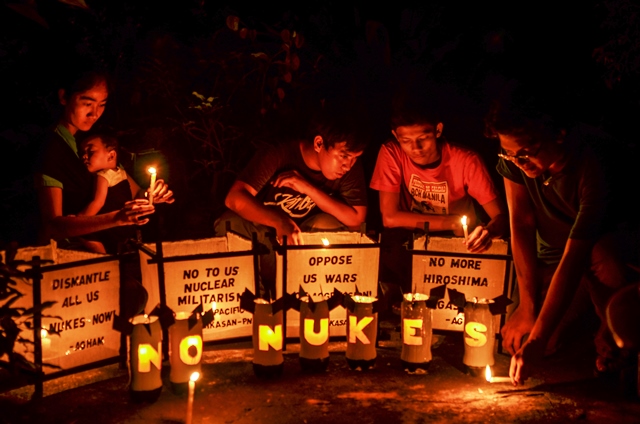 Using China’s military bullying as a pretext, the US government has successfully made new or improved agreements with Japan, Malaysia, Vietnam, Thailand, Indonesia, Brunei, Philippines, Singapore and Australia to have greater military access, cooperation, and presence in these countries. In April 2014, US Pres. Barack Obama visted the Philippines where he signed the US-PH Enhanced Defense and Cooperation Agreement (EDCA), a new military agreement with the Philippine government headed by the politically-besieged Pres. Benigno Simeon Aquino III.

The EDCA provides the legal basis for the re-establishment of US military bases and permanent basing of US forces in the country. The agreement is being challenged in the Supreme Court and other venues of protest by activists, patriotic individuals, progressive organizations and other concerned groups, including environmental groups like the Kalikasan People’s Network for the Environment, condemning its unconstitutionality, violation of our national sovereignty, and other adverse impacts.

It is also one of the bases of impeachment raps filed in the House of Representatives against Pres. BS Aquino III, citing his betrayal of public trust in his railroading of EDCA’s signing.

Kalikasan PNE opposes the EDCA precisely as it seriously endangers the health of the people and welfare of our environment. Among the environmentally dangerous provisions that a clearly implied in EDCA that the US military can do are the following:

In addition, the EDCA ensures that the US is not obligated to strictly follow and be held accountable under Philippine and International environmental laws and guidelines. They are not obliged to pay compensation in the event of a toxic spill or contamination because of their military operations. It is also clearly stipulated in EDCA that any dispute will be settled exclusively through consultation between the PH and US executive branches.

In this light, the Aquino government is now fast-tracking the upgrading of the Philippine naval base in Palawan’s Ulugan Bay where US troops will be hosted. Most likely, US nuclear armed ships will come and go in Palawan and weapons of mass destruction will be deployed, in the deceptive pre-text of helping the Philippines thwart the growing aggressiveness of China.

The US Pivot and EDCA is deliberately designed to maintain US control over the Asia-Pacific Region, rearing its ugly head of nuclear militarism. It is hard not to revisit the harrowing experiences in Hiroshima and Nagasaki amidst these growing military tensions in the region. The peoples of Asia must rise up against this specter of US war of aggression as we cry: No more Hiroshima and Nagasaki!

Clemente Bautista is the national coordinator of the Kalikasan People’s Network for the Environment (Kalikasan PNE).