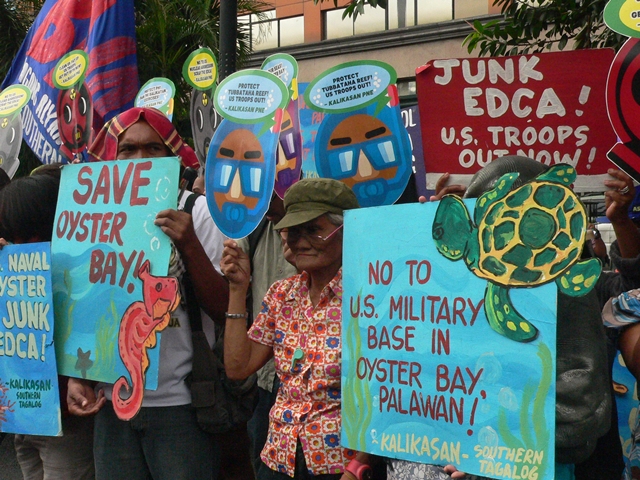 In 1991, September 16 became a shining moment of nationalism in Philippine history when the Senate stood up against the US by junking the proposed treaty that allows an extended stay of its military bases.

In its 23rd year yesterday, environmental and women activists protested at the US embassy in Manila this time against the Enhanced Defense Cooperation Agreement (Edca), signed under Pres. Aquino who, activists say, is doing the opposite of the 1991 senate’s assertion of sovereignty. Edca allows the unhampered use of Philippine territory by US troops for basing, including free use of utilities. And in case of conflict with the law, US soldiers will not be covered by Philippine courts.

Some 30 activists from Southern Tagalog led by the Kalikasan-People’s Network for the Environment converged near the Plaza Nuestra Señora de Guia across the US embassy. They were blocked by police men of about the same number. Moments later, more protesters, this time led by Gabriela, appeared at the opposite lane, just outside the embassy wall. They were also blocked by police. 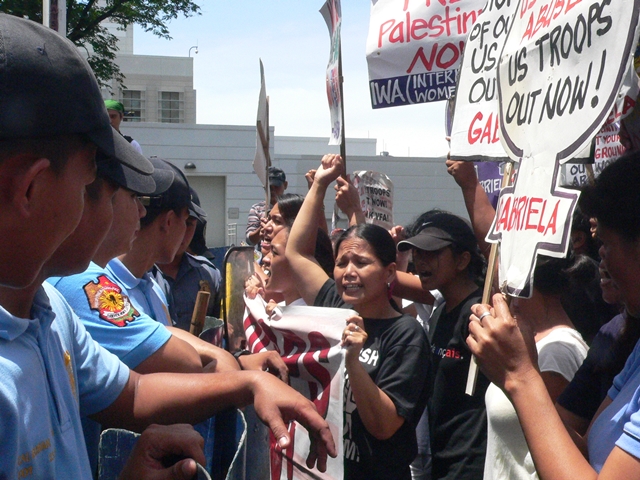 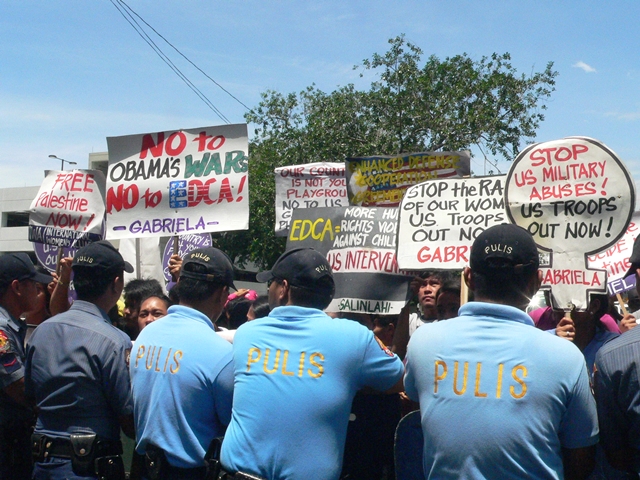 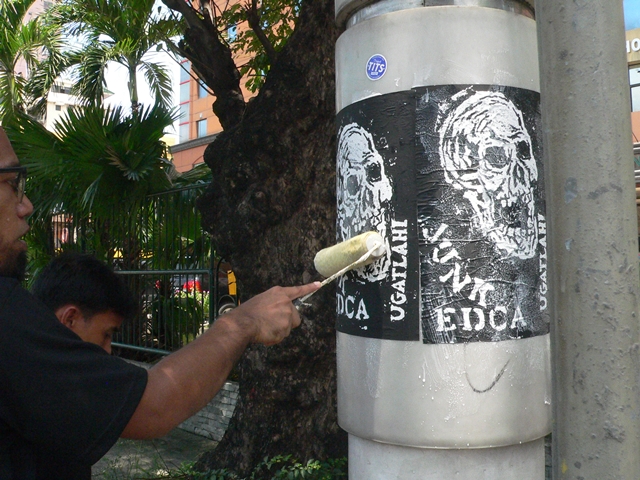 The protest proceeded with the two groups holding simultaneous programs on the two lanes.

Ironically, before the day was through, the Supreme court issued a ruling rejecting the petition for a writ of kalikasan against the US Navy over the grounding of its minesweeper USS Guardian in Tubbataha Reef in Palawan. In 2013, the minesweeper trespassed into the protected Tubbataha Reef Park and destroyed some 2,345 square meters of coral reef, which will take decades to regenerate.

“This is tantamount to letting the US Navy get away,” said Clemente Bautista of the Kalikasan-PNE, one of the petitioners. “The SC decision shows that any foreign military vessel can illegally enter Philippine territories, trespass into protected areas, destroy our precious resources, and get away scot-free.”

“With the SC junking of the Tubbataha Writ of Kalikasan Petition and the implementation of the onerous Enhanced Defense Cooperation Agreement, we expect more environmental violations and criminal acts from the US forces in the Philippines, Bautista said in a statement released after the protest. 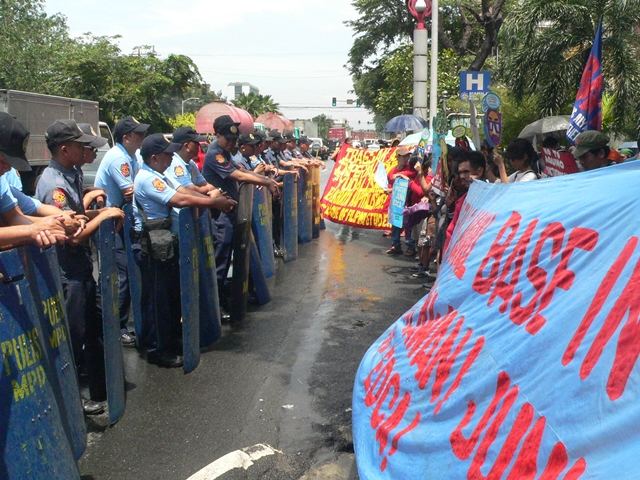 During the program, activists from the Southern Tagalog region warned of dire consequences of the upgrading of the naval base in Ulugan bay, Palawan, which was inspected by Pres. Aquino in June. Ulugan Bay is a rich biodiversity and fishing area facing the Spratlys Islands in the West Philippine Sea (South China Sea), which is being disputed because of its rich oil and natural gas reserves.

The naval station is being offered as one of the “agreed locations” for US troops basing under Edca.

Rjei Manalo of Gabriela-Southern Tagalog said fishermen in the area have lamented that they were banned from fishing in the area. Five barangays are affected, she said.

Mark Ng of Bayan-Southern Tagalog, said in a statement, the Phil. Navy had been imposing restrictions in the area in preparation for the joint military training exercises. He said 50 families had also evacuated from Bahile village in Ulugan, due to the naval base reconstruction.

PJ Santos of Kalikasan-ST, meanwhile said that an estimated 15 per cent of Ulugan Bay’s mangrove are located where the naval base is being built, and where military trainings are being conducted.

“The paradise we know as Ulugan Bay may just as well be history because of the recklessness of the US and its puppets like Aquino,” Santos said.

Gabriela’s Manalo chided the police blocking the protesters: “Can you defend us from harassment and abuse by the American troops?”

Manalo referred to the case of “Nicole,” the Filipina who was raped by American Lance Corporal Daniel Smith, who was convicted by a Makati court. The Court of Appeals later overturned the ruling.

A Migrante leader from Southern Tagalog said: “While we Filipinos have no land, and are burdened with the high cost of power and water, the government is giving land to the Americans for a military base, with free use of water and electricity.”

Text and Photos by DEE AYROSO