Minding the problem of monster traffic in Metro Manila

Stuck for hours on the road from early morning to nearly midnight, Metro Manila commuters had a very frustrating experience September 5, when traffic stood at a standstill from Manila City to Bulacan province. With an hour of thunderstorm with heavy rains just this October 1, we saw yet another repeat as massive floods rendered EDSA and other major thoroughfares impassable, creating monstrous traffic jam.

I can imagine workers, students and professionals waking up in ungodly hours before dawn to catch early transportation to their offices, classes and other important functions—miserably plodding for hours only to completely lose a day’s worth of productivity to monstrous traffic. Or rushing to their homes after office or school hours only to be stuck in traffic, missing their loved ones. I’m sure commuters are cursing the ineffective, corrupt government officials and greedy private transportation corporations for the daily traffic stress commuters always have to face. 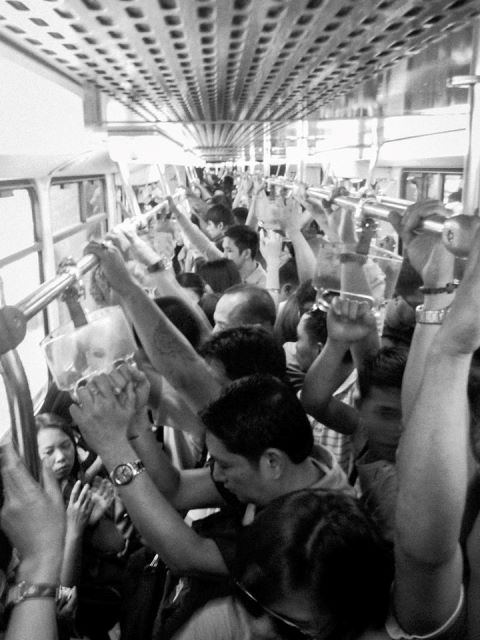 A study in the United States says traffic congestion tends to slow job growth when it delays the commuter 4.5 minutes per one-way trip relative to free-flowing traffic. It says that US commuters experiencing greater delay than that start to have a lower quality of life.

It is inarguable that the worst traffic in PH is in Metro Manila, the center of economic activity in the country. Daily travel in the metropolis for an ordinary commuter requires two to four hours a day.

A 2012 Japan International Cooperation Agency (JICA) study finds that Metro Manila commuters travel an average 81 minutes per trip. JICA also estimates that the country loses around PHP2.4 billion a day because of traffic in Metro Manila and this increases as traffic gets worse every year.

For every minute a commuter languishes in a traffic, the longer he or she is subjected to stress and pollution, translating to higher incidences of sickness and cost of medical expenses. The longer hours lost in traffic means fewer time spent for family, rest and recreation.

Metro Manila commuters are exposed to greater air pollution and extreme doses of toxic substances that could cause many diseases— including cancer. In 2009, the Philippines had one of the highest incidences of breast cancer in Asia and several cities in Metro Manila had a much higher incidence than most cities in the country. 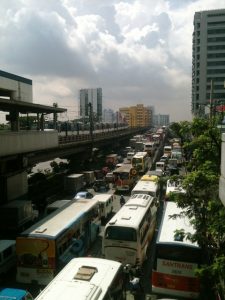 Worsening traffic is clearly becoming one of the major economic, environmental and health concerns of Metro Manila citizens. The Aquino government and past administrations said they tried to address the traffic problem by privatizing our transportation system, based on assumption that private-run industries are efficient.

Train systems such as the Metro Rail Transit (MRT) and Light Rail Transit (LRT) have all been privatized. Major super-highways such as NLEX and SLEX are controlled by the biggest private companies and richest families in the land. Given that the bus system is the primary transport in the country, no bus company is owned or run by public institutions.

But the monstrous traffic in the country also speaks of the ineffectiveness of the national government’s attempts to supposedly address the decades-long problem. The escalation of accidents and glitches in the MRT, the daily heavy traffic in EDSA, these only prove that the privatized transportation systems refused to improve services if they will not profit from it.

The blame game between the Sobrepeña Family-owned MRT Corp. and the Department of Transportation and Communication (DOTC) in the Senate hearings shows the irresponsibility of both camps in owning up the failure to provide safe, reliable and adequate transport service in the MRT. 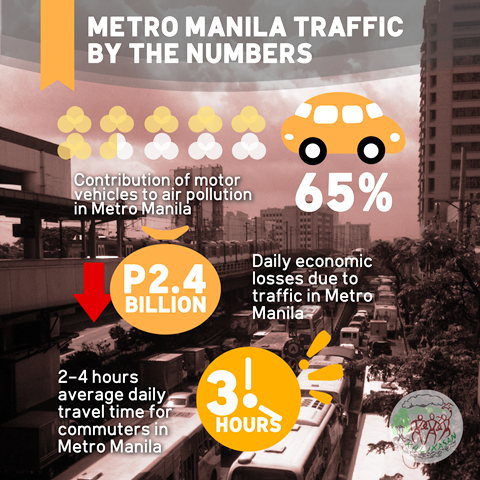 All of these will help ease traffic but not solve it. As long as the government continues to abandon its role and responsibility in providing effective mass transport systems in the country, and allows the private companies to shoulder this task for a fee, the Filipino commuters can expect more of monstrous traffic jams.

Ultimately, it requires more radical solutions to the failed economic policies and programs the government is pursuing. It requires the people to aspire and work for a government that has the political will to realize a mass transport system in PH that is efficient, affordable, reliable, clean and safe for the commuters.

With a sorry excuse—or is it a deluded conviction?—that monster jams simplistically speak of economic prosperity, the Aquino government is a hindrance to this solution.

Clemente Bautista is the national coordinator of the Kalikasan People’s Network for the Environment. For comments, email him at secretariat@kalikasan.net.