You Are Here: Home → 2014 → October → 13 → Peasants fight back as Cojuangco-Aquino firm tightens grip on Hacienda Luisita

The Cojuangco-Aquino-owned firm in Hacienda Luisita has been putting up concrete barriers around farm lots, assaulting and illegally arresting farmers. But 56 years after the Cojuangcos laid claim on the estate, the farmers are not about to give up the fight for their right to the land.

MANILA — “They really don’t want the land distributed,” said Teofilo Garcia, 81, his shoulders hunched by age and his eyes squinting at the glare of the noon sun. 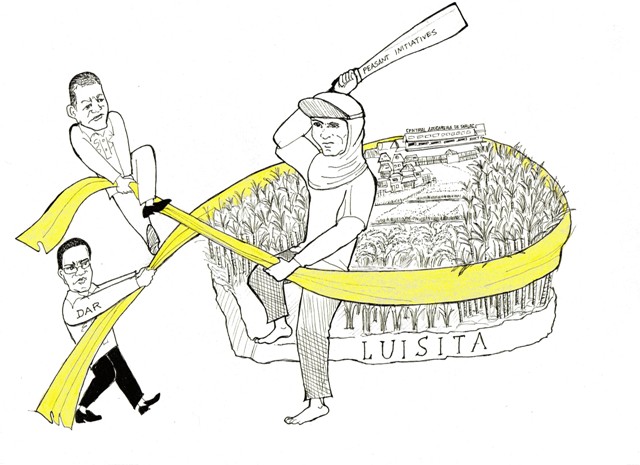 “They” refer to the rich and powerful Cojuangco-Aquino clan, among whose scion is President Benigno Aquino III. And Garcia was referring to Hacienda Luisita, the 6,000-hectare estate which the Supreme Court had ordered to be distributed to its farmworkers in 2012.

Garcia, a member of the Alyansa ng Magbubukid sa Asyenda Luisita (Ambala) and survivor of the Luisita massacre, was at the Department of Justice in Manila on Oct. 10. Along with more than 50 peasants of Hacienda Luisita, they filed criminal charges against the board members of the Cojuangco-owned Tarlac Development Corporation (Tadeco), its hired guards, police officials and men, and government officials.

If the Cojuangco-Aquinos, thru the Tadeco, is not giving up Hacienda Luisita in spite of the order for its distribution, the peasants said, neither are they.

Half a century ago, in 1968, the hacienda should have been turned over to the farmers, that being the condition set by government in 1958, when it gave a loan to Don Pepe Cojuangco to purchase the estate.

But Garcia and the Ambala farmers know for a fact that it was only in 2005, through the peasant-initiated “bungkalan” (cultivation) of parcels of land in the hacienda that they actually tasted the fruits of the land, setting the ground for its distribution.

This pushed the Cojuangcos’ button, which triggered a new round of atrocities against the peasants. As soon as the farmers received the Notice of Coverage from Dar, Tadeco guards started bulldozing and building concrete walls along their farms. Various criminal charges have also been filed against the peasant leaders.

Among the farms reclaimed by the Cojuangcos was Garcia’s. He has not been allowed by guards to enter his farm in Balete village since late last year in spite of the Dar notice, and the fact that his crops were then ripe for harvest.

Romeo Corpuz of Cutcut village was among those who filed attempted murder charges against the Tadeco officials, including Presidential sister Ballsy Aquino-Cruz and uncle Jose “Peping” Cojuangco Jr. Corpuz is among the 81 farmers who were threatened by Tadeco with eviction, and subsequently charged with “illegal detainer,” which is still pending in court.

In his complaint, Corpuz said that he and other Ambala-Cutcut leaders had tried to repeatedly stop the Tadeco guards and employees from putting up a concrete wall along their farm lots. Tadeco started building the wall on March 24 but were halted by the farmers. Corpuz’s brother Rosario or “Rudy” was injured in the head by the guards in the incident. Later, on March 27, Tadeco started again to construct the wall but was stopped when a Dar representative, Geraldine Tejero, told them to await the final decision on the land.

On March 28, the Tadeco employees were at it again, and Corpuz and other leaders tried to negotiate with the guards, who instead attacked them. A guard named Wilmin Cariaga hit peasant Jerry Mesa on the head with a hammer, and as Cutcut leader Renato Mendoza rushed to help his bloodied colleague, David wielded his shovel but missed Mendoza. Cariaga then attacked Mendoza, hitting him with the hammer in the right shoulder and then at the left side of the body.

As Mendoza and Mesa retreated, the Tadeco employees and guards ganged up on Corpuz, with David attacking him with a shovel and Junior Calo hitting him with a hollow block on the back. Even as Corpuz was prone on the ground, three other guards, Cariaga, Nixon Notarte and Lando Corpuz kept kicking and hitting him. Notarte even threatened to kill Corpuz, mistaking him for his brother Rudy.

Ironically, the police men who were at scene, then arrested the injured Corpuz, along with Marcelino Lugay, who was also attacked with a shovel by guard David. Another leader, Ofelia Hernandez, was on her way home when the police forced her into their vehicle, causing her injuries.

Hernandez and Lugay were detained for two days and, along with Corpuz, were slapped with trumped-up charges by the Tadeco guards. Corpuz, who was badly injured and had a heart condition, was brought to the hospital where he recuperated for a week.

The Cutcut leaders later found out that the guards demolished Ambala’s hut and hauled away their properties inside, which included farm implements, kitchen utensils, a television and DVD player, and a water pump donated by students of Adamson University.

In Balete village, as early as November 2013, Tadeco has built a long concrete wall topped with barbed wire with the sign “Development Soon to Rise” along the lots being tilled by Ambala farmers. By December, they started bulldozing the farm lots, even those already golden with rice ready for harvest.

For the destruction of their homes and farms, Joselito Lucas was among those who filed charges of trespass of dwelling, violation of domicile, and malicious mischief. His extended family of nine lived on their 1.5-hectare farm lot, and tried to keep their ground even as they have been banned from touching anything in their rice field. On February 8 this year, they were eventually forced to leave when 50 armed guards of the Tadeco-hired Great Star Security agency arrived with hammers and spud bars.

Lucas’ neighbour Jimmy Belleca even lost some household and farm items, such as cooking pots, pump belt, diesel and some farm animals were unaccounted for after the demolition of his hut.

On April 3, the five were illegally arrested from their farm in Mapalacsiao village, while they were taking a break from farm work and resting at a hut. Police men led by Tarlac city police chief Felix Bervo Jr brought them to Camp Makabulos in Tarlac City where they were detained without charges overnight. They were brought to the Tarlac city regional trial court the next day where Francis Figueroa, a subcontractor, appeared and charged the five men, claiming they pulled out the stone markers erected by Dar.

“When I asked him if he saw us removing any stone marker, he answered no,” Quiambao told Bulatlat.com. He said that Figueroa couldn’t present any witness, because no stone marker was removed.

Rebecca Santos, 48, was among those who filed cases of malicious mischief, grave threats and coercion against Virginia Torres and several of her employees, Tarlac provincial agrarian reform officer (Paro) Jose Eduardo Narciso, Mapalacsiao village chair Rael Gatus. The case pertained to the incidents on July 3 and 8 and August 2 and 6, when Torres’s men and the other respondents destroyed fruit-bearing trees, crops and newly-built dikes in the farms of Santos and her neighbours.

Torres, the former Land Transportation Office (LTO) chief, was reportedly leasing farm lots through “ariendo,” an arrangement in which a financier pays the farmer for the use of the land. In effect, the farmers loses control of their farm, while Tadeco regains it.

Santos told Bulatlat.com that she stepped in front of a “parmal” (tractor) along with Celia Romero, an elderly peasant woman, to stop it from flattening Ambala’s communal hut on July 8. Moments before, the same tractor, driven by Torres’s worker Oscar Lansang, had cut down at least 500 fruit-bearing banana plants, maturing fruit trees such as mango, guava, langka, avocado, santol, and duhat, and her multicrop of eggplant, peanut and chili.

Ofelia Mendoza, also of Mapalacsiao, said in her complaint that the same men went to her farm on July 3 along with Dar official Narciso, who claimed that they have documents that order the destruction of her farm. However, Narciso did not give her a copy or let her read it. The tractor then proceeded to flatten her crops, which included one hectare of organic black and red rice, and several rows of string beans and chili, mango and guyabano trees.

Jobert Pahilga, Ambala’s legal counsel and executive director of the Sentro para sa Tunay na Repormang Agraryo (Sentra) said he was told by DOJ prosecutor Richard Padullon that they had created a special committee that will look into the complaints of the farmers.

Pahilga said they are set to submit more complaints, since many other victims were not able to join in the Oct. 10 filing. Aside from their sworn statements, among the evidence submitted by the farmers were pictures and videos of the incidents.

“After all, no less than the President’s family is involved in the atrocities at Hacienda Luisita,” she said.

Among those who filed complaints were cousins Michelle Pineda, 16, and Jerome Flores, 17.

Michelle was interviewed by Bulatlat.com in the video documentary. In the documentary, she sobbed while recounting how the guards demolished their home in Balete on February 8. But at the DOJ, she appeared firm and composed as she subscribed to her complaint before prosecutor Gail Stephanie Maderazo.

Charlito Catalan, 68, who was among the five arrested in Mapalacsiao, told Bulatlat.com that he was “happy” having filed the complaints with other Ambala members.

Like the other complainants, Catalan also lost thousands of pesos spent in farm preparation and in lost income when the Tadeco guards bulldozed his field of mung beans. He said that he and his neighbours had returned to their farms and replanted their crops.

“Our planting will not stop, even if they flatten our fields. What else can you do if you don’t plant anything?” he said, jovially.

Garcia, the oldest among the complainants, said that his 54-year-old wife gets some income from doing laundry, but has been crying about losing their farm. He said he is keeping his faith in the fight.
“If you stop, nothing will happen,” Garcia said. “I have my children and grandchildren, they will continue to till the land,” he told Bulatlat.com in Filipino.