Read also: How to prevent the spread of Ebola virus

“If the DOH has a problem managing preventable infectious diseases such as measles, how can we be assured that it can handle the deadly Ebola virus?”

MANILA – Amid the announcement of the Department of Health that they are ready in case the Ebola virus emerges in the Philippines, health workers working on the ground believe otherwise.

Health workers from the Lung Center of the Philippines (LCP), one of the referral hospitals that will accommodate patients with Ebola virus, said there is no training for health workers on how to deal with Ebola, no appropriate personal protection equipment (PPE) and most of all, no plans for health workers who might also catch the virus.

“Health workers are very much alarmed since there is no special ward at the moment that is well-equipped and no special training for the health workers who will attend to Ebola-infected patients,” said Eleazar Sobinsky, president of the LCP Employees Association-Alliance of Health Workers.

He added that health workers still get infected even in countries like the United States that is well equipped against the Ebola.

It was in August when a US missionary first contracted Ebola. In a report by Reuters there are already 260 Americans who are being monitored in Texas and Ohio.

Health Secretary Enrique Ona earlier announced that the DOH is ready once Ebola virus reaches the country. In a report, Ona presented health workers wearing hazmat suits as protection against Ebola. This is very different from what the LCP health workers presented to the media during their protest action on Thursday, Oct. 23: mask, goggles for eye protection, medical rubber gloves, a knee-length health gown with some skin still exposed. 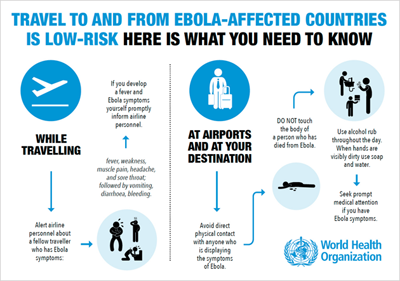 “It’s not that we don’t want to accept them (Ebola-infected patients). It is our duty and we have accepted all patients with all sorts of illnesses. What we are calling for is for the DOH to have a concrete plan, not only for Ebola patients but also for health workers who might also contract the virus.” Sobinsky said.

Citing data from the World Health Organization, the AHW said 337 health care workers were infected of Ebola and more than 181 of them have died.

“Supposedly, as the father of our agency, the Secretary could have worked with health workers on the ground. What is the right thing to do? Do we have the appropriate equipment? Do we have appropriate facilities? Who will undergo training? How are we going to treat these patients and what are the plans for health workers who might get the virus? These should be carefully planned especially since this is a highly infectious disease,” said Sobinsky.

According to the DOH, the three main hospitals where Ebola patients will be probably confined include the LCP, the Research Institute for Tropical Medicine (RITM) and San Lazaro Hospital. A P500 million ($11 million) fund is also allocated for the treatment of Ebola cases.

Rey Camacho, nurse at the LCP also said that a separate facility should be built for Ebola patients. “Lung Center is in the middle of the city. It is very far away from the airports and the port areas where patients can be easily transported from one place to another.”

A medical technician, who had been at the Lung Center for two decades, told Bulatlat.com that it is a specialty hospital for lung diseases.

“We are not a hospital for infectious diseases. How can the DOH say that the Lung Center is prepared when we cannot see any preparation being made in our own hospital? There is no memorandum for trainings of health workers. Being the front liners in hospitals, every health worker must know what to do.”

Unlike the upgrade of laboratories at the RITM to treat Ebola patients, Danny Vicencio, 47, nursing attendant said, there are only container vans in the LCP compound where Ebola patients will be confined. There are no gears like hazmat suits appropriate for Ebola cases. “We are astounded with the DOH announcement. During the height of Mers-Cov and H1N1, health workers were better prepared. We had appropriate equipment and PPEs then. This is not the case with the Ebola virus,” he told Bulatlat.com in an interview.

Sobinsky also said that all their doctors are pulmonologists, and there is only one infectious disease doctor in the hospital, who will soon retire. “That is why it is very alarming for health workers and patients too,” Sobinskly said.

The Council for Health and Development (CHD) also expressed concern on the readiness of the DOH to handle Ebola cases. They said the DOH still could not control the increasing cases of disease like measles, how much more when Ebola hits the country.

“Despite the high profile ‘Iligtas ang Pinas sa Tigdas’ program of the DOH – measles continue to affect the population,” said Rosalinda Tablang, deputy executive director of the CHD. She added that the DOH admitted a sharp increase in the number of measles cases especially in Metro Manila in 2013 – of the 1,724 confirmed cases, 744 were found in the National Capital Region.

“Early this year, the Department of Health announced measles outbreaks in in the cities of Manila, Caloocan, Las Piñas, Malabon, Muntinlupa, Navotas, Parañaque, Taguig and Valenzuela.”

“If the DOH has a problem managing preventable infectious diseases such as measles, how can we be assured that it can handle the deadly Ebola virus?”

The WHO said in a report that by December, the number of new Ebola cases could reach to 10,000 per week.

While there are reports of countries in West Africa that are free from the virus, the number of people infected is still rising. As of Oct. 17, WHO raised the death toll to 4,546 people out of 9,191 cases. As of the same date, Senegal was declared free of the virus. On Oct. 20, Nigeria was also declared free of Ebola.

There are thousands of overseas Filipino workers working in the West African countries, and this makes the Philippines vulnerable to the Ebola virus that still has no approved medication.