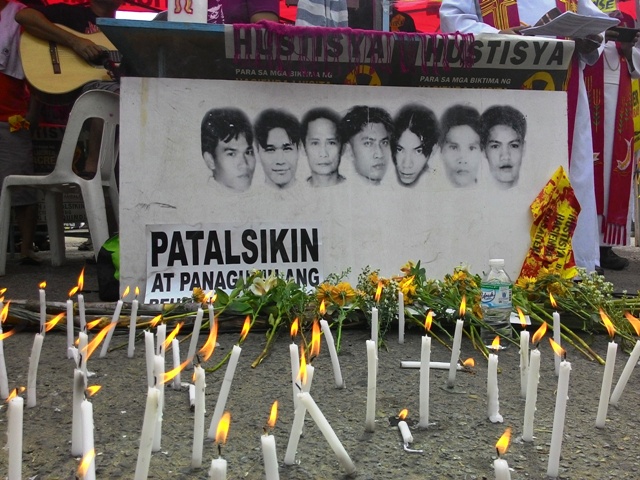 “Is justice only for the rich and not for the poor?”

HACIENDA LUISITA, Tarlac – Several supporters from Manila participated in the commemoration of Hacienda Luisita massacre on Nov. 15 to 16. A caravan went all the way to Hacienda Luisita in Tarlac with yellow ribbons tainted with blood in every vehicle.

It has been 10 years when the seven striking farm workers were killed in in Hacienda Luisita, Nov. 16, 2004 and yet not a single perpetrator of the horrendous massacre was punished. 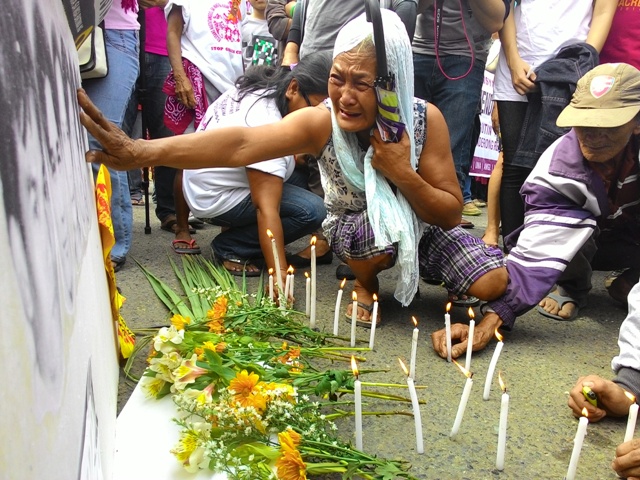 In Mendiola, the protesters burned an effigy of President Aquino who was depicted as “berdugo” (butcher). Aquino is a scion of the Cojuangco clan who had claimed ownership of the hacienda since the 1960s.

Kilusang Magbubukid ng Pilipinas chairman, Rafael Mariano, said it has been 10 years after the massacre, yet not a single perpetrator was punished because the President himself was behind the massacre. 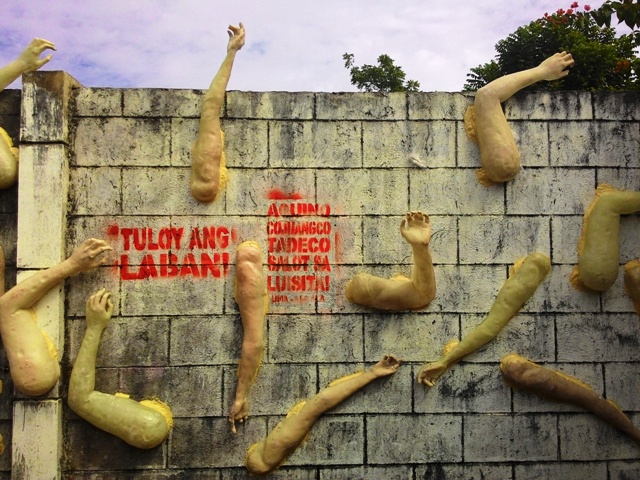 Mariano commended the farm workers and those who support the struggle of Hacienda Luisita for not giving up despite harassment, intimidation, assassination of leaders and the continuous land grabbing of their land by the Conjuangcos. 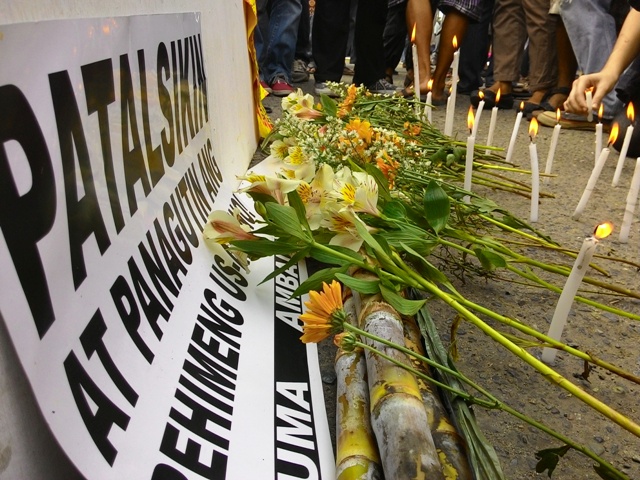 “The ‘bungkalan’ is a higher form of asserting the right to the land,” said Mariano, referring to the peasant-initiated collective tilling of parcels of the former sugarlands, where they planted organic rice, vegetables, and fruit trees.

At noon, the caravan proceeded to Hacienda Luisita, stopping by for a short program in Plaza Miranda in Angeles City, Pampanga.

At around 6 p.m., the caravan arrived in barangay Balete, Hacienda Luisita where they were greeted by the residents and farm workers with torches and marched their way to the village’s court where they held a solidarity program.

Among those who spoke were Bayan Muna Rep. Neri Colmenares and Anakpawis Rep. Fernando Hicap who pledged to carry on the fight, not only inside Congress but also in the streets. 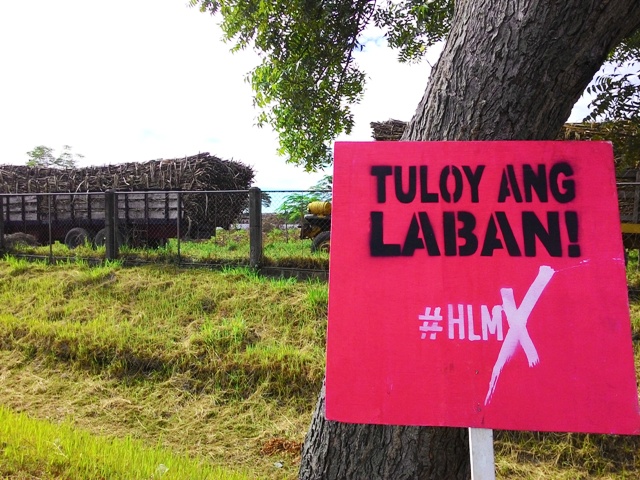 Emily Ladera-Facunla, the sister of slain councilor Ladera, thanked everyone for their support for the Hacienda Luisita farmers’ cause.

Monique Wilson, theatre actress and global director of One Billion Rising, sang “Bayan ko” and the broadway song “Do you hear the people sing.”

Everyone became emotional and openly cried as a video of the massacre was shown. Some of the residents who survived the massacre said they will not forget that day. In the audience, one woman said, “I couldn’t sleep at night after that.”

Everybody was touched by 10-year-old Angela Tuviera’s speech, the youngest spokesperson of land and justice campaign of the farm workers. 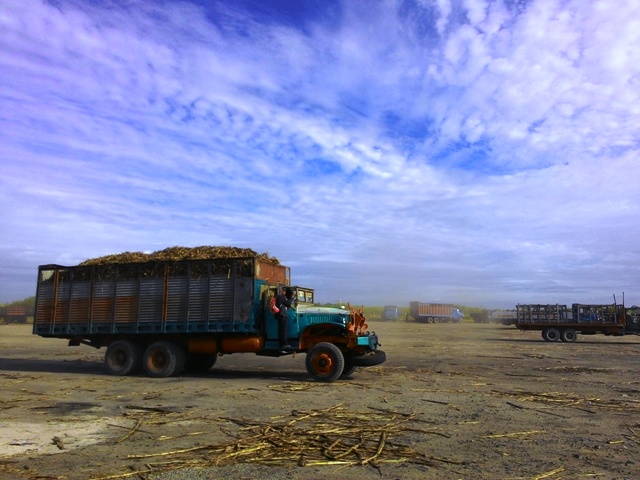 “It has been 10 years but there is still no justice,” Tuviera said. “Is justice only for the rich and not for the poor?” She thanked supporters who fight for the rights of the farmers.

She thanked Florida Sibayan, chairwoman of Alyansa ng Magbubukid sa Asyenda Luisita (Ambala) for standing firm for their right to land. She called Sibayan on stage, and both got emotional as Tuviera embraced and thanked her.

In the morning of Nov. 16, supporters, relatives and farmers of Hacienda Luisita marched to the Gate 1 of Central Azucarera de Tarlac (CAT), site of the farm workers picket line and the massacre.

An ecumenical mass was held in front of the gate, and relatives of the martyrs became emotional when they were honored during the mass. 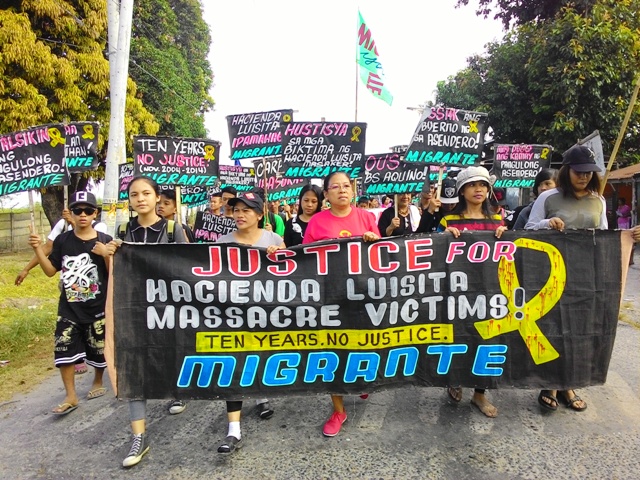 Ambala chairwoman Sibayan recalled the very spot where she fell during the massacre, where she and 120 others sustained gunshot wounds when state forces “peppered us with bullets.”
“We went on strike to fight for our justifiable wages,” Sibayan said. She called on everyone to continue their fight for justice and land.

Artists put up art works and large portraits of the seven victims in the walls of the CAT.
Photojournalist Jez Aznar put up a photo exhibit, called “10 Photos to Commemorate 10 Years of the Aftermath of the Hacienda Luisita Massacre,” with one photo hung in different locations, including one on the walls of CAT.

The caravan then went to the Camp General Servillano Aquino, the home of Northern Luzon Command (Nolcom) where a short program was held. Nolcom soldiers and police were the ones deputized by the Department of Labor and Employment to disperse the picket line of Luisita workers on Nov. 16, 2004. 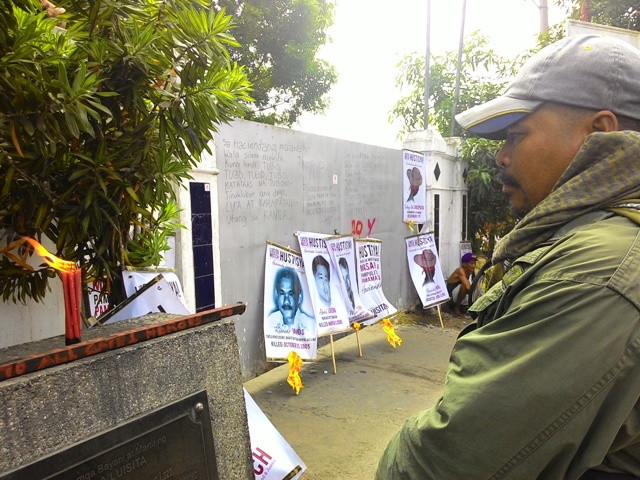 Jang Monte, sister of the slain New People’s Army (NPA) rebel Recca, spoke at the program and condemned the military for violating international humanitarian law when they killed Recca and eight others in the combat operations in Lacub, Abra.

Others who also spoke were former Bayan Muna Rep. Teddy Casiño, Anakbayan chairman Vencer Crisostomo and Joseph Canlas, regional chairman of Alyansa ng mga Magbubukid sa Gitnang Luzon (AMGL). They pledged to continue to fight for justice not only for the farmers of Hacienda Luisita but for all farmers of the Philippines who continue to be denied of their right to land.