“Let’s hope that there would at least be one good news this Christmas – that the SC decision (against DAP) will remain, that DAP would be junked once and for all.” – Renato Reyes Jr., Bayan

MANILA — The Supreme Court (SC) en banc session included in their agenda today December 2 the decision on the motion for reconsideration filed by President Benigno Noynoy Aquino III. On the table is the question whether the justices would reverse their unanimous decision, as President Aquino desired, after the SC ruled as unconstitutional the salient points of President Aquino’s Disbursement Acceleration Program (DAP).

To await the SC decision, members of Bagong Alyansang Makabayan (Bayan) and allied groups picketed the gates of the Supreme Court. In a speech during the rally, Renato Reyes Jr., secretary general of Bayan, expressed the group’s “Christmas wish” for the decision to be one of the people’s good news this year.

“Let’s hope that there would at least be one good news this Christmas – that the SC decision (against DAP) will remain, that DAP would be junked once and for all,” Reyes told reporters.

But the SC did not vote on the DAP issue because Chief Justice Maria Lourdes Sereno was not at the en banc session but in Malacañang meeting with the Department of Justice (DOJ) and Office of the Ombudsman. The next and last SC en banc session scheduled for the year is on December 9.

Reyes warned that for as long as doubts over the ruling on the illegality of DAP persist, those benefiting from it can still do a lot of things to circumvent the ruling.

He reminded the public that the 2015 national budget has not yet been finished and signed into law. In the draft 2015 budget currently being finalized by members of the House of Representatives and Senate, there is a provision that redefines “savings” along the line used by DAP, which is one of the practices declared as illegal by the Supreme Court.

When passed, this means much of the budget can become pork barrel funds after the president decides to discontinue projects and realign the budget allotted for it, as they did with DAP. This has been the warning aired by various progressive groups including the Makabayan bloc of legislators.

In the picket at the gates of the SC, Bayan’s Rita Baua enumerated the projects funded by Aquino, and the names of congressmen and senators who received DAP funding, amid jeering from the protesters.

“The trouble with DAP and how funds under it are pooled, is that only one or a few decide about allocating and spending the money,” Reyes said at the picket, in Filipino. Aside from the lack of transparency, DAP and DAP-like funding mechanism are vulnerable to corruption and political patronage, various speakers also said during the picket at the SC.

“We won in round one. But the decision is not yet final,” Reyes said about the SC decision that ruled in favor of their petition against DAP. Aside from Bayan, there are other groups that petitioned the SC to declare DAP as unconstitutional.

“With their decision, the SC says DAP is illegal, that it is against the constitution to declare savings out of programs not implemented (following decision by just a few to end it), that it is illegal to treat unprogrammed funds like his own funds,” Reyes of Bayan said.

It has been nearly five months since the Office of the Solicitor General and Aquino had filed a motion for reconsideration with the Supreme Court. Bayan said they heard from sources in the court that there’s a decision already and it is just awaiting signature by the magistrates.

Many including Bayan believe 14 justices will not easily reverse a unanimous decision. But 2015 pre-election year is approaching and as the protesters chanted during their picket at SC, President Aquino is “pork barrel King.”

The progressive bloc is calling not only for the final decision on the unconstitutionality of DAP but also for full accounting of DAP funds and accountability of those behind it, principally President Aquino and his Budget Secretary Florencio “Butch” Abad.

“Aquino had Senators Bong Revilla, Juan Ponce Enrile and Jinggoy Estrada jailed for fund misuse. He should also be jailed, everyone who spent funds wrongly should be jailed,” Roger Soluta, Secretary General of KMU said at the picket.

Soluta said there are many things wrong with DAP, not least of which is how Aquino denied government employees their benefits just so he can get his hands on additional pork.

“Aquino withheld government’s employee benefits to get pork. He alone decides where and how to spend the public funds. But his justification that spending money through DAP will boost the economy did not happen,” Soluta said.

The labor leader warned that with Aquino wielding power over public funds, he could all the more buy support from other politicians. Soluta noted that as it is, President Aquino is already squeezing the SC and showing his disrespect of its decisions.

For example, “Noynoy has a hand in the Cojuangco clan’s violations of the SC decision on the distribution of Hacienda Luisita lands,” Soluta said. 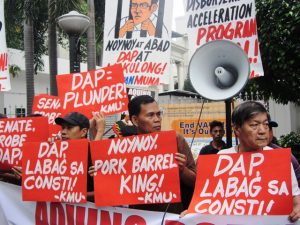 He urged the public not to allow President Aquino to get away with violations of the law. He also urged the SC justices to stand by their decision on the unconstitutionality of DAP.

Leaders of progressive groups described President Aquino and his actions as a clear example of bureaucrat capitalism, because he is using public funds to control congress.

“It’s very hard to file impeachment raps against him in congress because Noynoy controls congress. Now he wants to control the SC, too,” Soluta said.

Calling on the public to oppose the bureaucrat capitalism by President Aquino, the progressive groups made noise in front of the SC and vowed to return next time the decision is up for voting.