As of Nov. 30, there are 491 political prisoners in the country, based on Karapatan data. Of these, 220 were arrested under President Aquino’s term. There are 53 ailing prisoners, 43 female prisoners, 42 elderly, and six minors.

MANILA – Political prisoners all over the country started a seven-day fasting on Dec. 3 to call for their release and for a stop to the “criminalization of political acts.”
Some 100 political detainees in 11 provincial and city jails and in four detention centers in Metro Manila have joined the fasting which will last until Dec. 10, the International Human Rights Day.

At the New Bilibid Prisons (NBP), the political detainees marched around the prison yard of the Maximum Security Compound, and hung a streamer which read “Free all political prisoners.” National Democratic Front of the Philippines (NDFP) consultant Eduardo Sarmiento is among those detained at the NBP.

Jigs Clamor, national coordinator of the Samahan ng Ex-Detainees Laban sa Detensyon at Aresto (Selda) said the detainees in other jails also hung streamers and held noise barrages in protest of “the government’s practice of criminalizing political actions and filing trumped-up charges against those perceived as ‘enemies of the state.’”

From Liwasang Bonifacio where the Manilakbayan and Southern Tagalog groups have camped out, the protesters marched to the Manila Regional Trial Court for the hearing on the multiple murder case against peace consultants led by Benito Tiamzon and Wilma Austria. 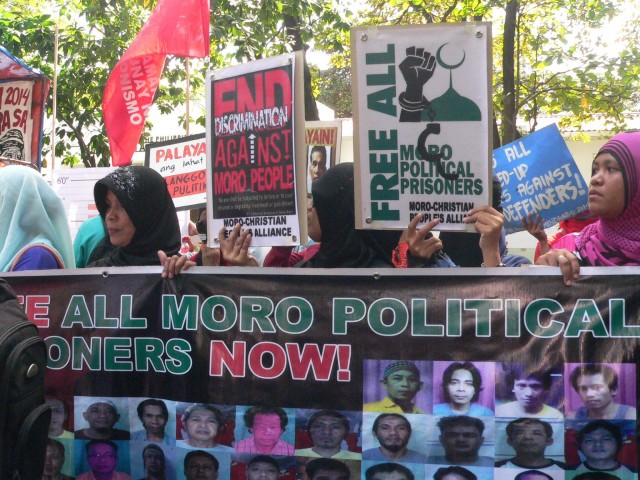 The protesters then marched to the Department of Justice (DOJ) office along Padre Faura street, where they held a program. Another short program was held in front of the Philippine General Hospital (PGH) where political prisoner Miradel Torres is confined along with her newborn son.

Among those who joined the protests was Lourdes Omar, a resident of Zamboanga City, whose daughter Aiza has been languishing in jail in Camp Bagong Diwa, Taguig City since September 9, 2013.

Aiza, 22, a member of the Gabriela Women’s Partylist and student at the Asia’s Latin Institute in Zamboanga City, was among those arrested during the siege launched by the Armed Forces of the Philippines (AFP) against the Moro National Liberation Front (MNLF) fighters who holed up in Zamboanga city villages.

Lourdes told Bulatlat.com that Aiza has left their home in Sta. Catalina village to go school on the day of the siege.

“I called her up, to ask about her other siblings,” Lourdes recalled her frantic search.

Aiza tried to go back home, but as she took the residents’ shortcut in Sta. Barbara village, state forces held her up and arrested her for being suspected as an MNLF member.

“I want justice. My daughter is not an MNLF member,” said Lourdes.

Suara Bangsamoro spokesperson Amirah Ali Lidasan said that Aiza was charged with illegal assembly, illegal possession of firearms, multiple murder and frustrated murder, along with 274 Moro suspects. They were brought to Camp Bagong Diwa, Bicutan in November 2013.
Five of the detainees where women, including Aiza. 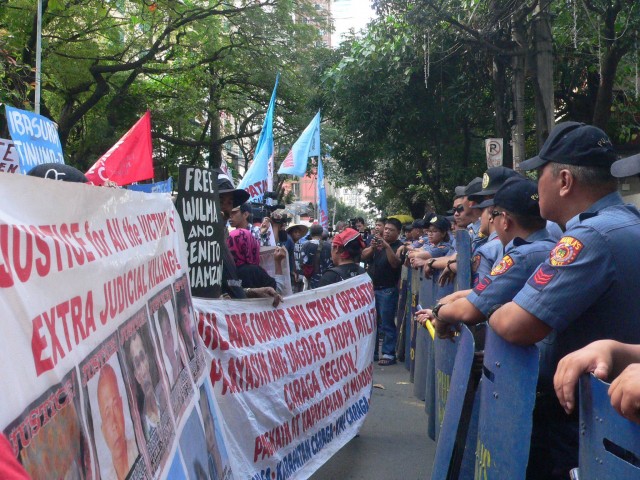 Lourdes broke down when she said that it was just her third time to visit her daughter in jail, and she doesn’t even have anything to bring her. Her other children wanted to come see Aiza, who is the second among nine children, but they only have airfare for one.

“Up to now we still live in the ‘grandstand’,” Lourdes said, referring to the Joaquin F. Enriquez Memorial Sports Complex in Zamboanga City where thousands of evacuees from the siege are still staying.

Lourdes said they have no choice but to wait for the turnover of relocation houses built by the government. She said the area where her house used to stand has been turned into a road. She also worries about moving into one of the relocation houses, which she described as “without pillars.”

“A strong wind could blow it down,” she said.

She said that she worries everyday for the safety of her small daughters. “I fear living in the grandstand. Many have gone to thieving, drug abuse and prostitution,” she said.

“We have done no crime,” Lourdes said. “If we were only warned about the siege, I could have brought all my children to safety at my father’s house in Paso Nangka.”

As of Nov. 30, there are 491 political prisoners in the country, based on Karapatan data. Of these, 220 were arrested under President Aquino’s term. There are 53 ailing prisoners, 43 female prisoners, 42 elderly, and six minors.

Human rights activists have criticized the DOJ for failing to stop the fabrication of cases against activists and leaders of progressive groups, most of who were arrested based on warrants for John and Jane Does.

“This deparment cannot simply say that they cannot do anything on these trumped-up cases lodged against political prisoners,” Clamor said. “The military weaves stories with prosecutors so they can arrest and detain people who are actively defending their rights and their communities.”

At the program at the DOJ, Tony Liongson, national coordinator of the Moro Christian Peoples’ Alliance, slammed the agency for reneging on its commitment to review the cases and work for the release of more than 100 Moro detainees, who were arrested during the all-out war of the Arroyo regime. The DOJ came out with its review and resolution, but removed the charges for only two detainees. Only one, Podong Palaw, was eventually released, because the other one was still charged with another trumped up case.

The protesters also called for the release of peasant leader Antonio Flores, who was arrested by police after a protest at Pres. Aquino’s house in Times Street, Quezon City on Nov. 29.

Karapatan said that not only does government put innocent people in jail, state security forces might also be making money out of the bounty they put out for the arrests.

“For 2014 alone, the government gave away at least P51 million ($1 million) of people’s money to so-called informers that led to the arrest of perceived ‘enemies of the state’ falsely charged with criminal offenses and are now languishing in jail,” said Cristina Palabay, Karapatan secretary general.

“Who these ‘informers’ were, only the government knows,” she said.

Palabay referred to the Joint Order no. 14-2012 issued by the Department of National Defense and the Department of Interior and Local Government which listed the names of “wanted communist leaders” and some P466 million ($10.4 million) as reward for their arrests.

This year, some of those in the list were arrested, namely: NDFP peace consultants Benito Tiamzon, Wilma Austria, and Roy Erecre; peasant organizer Dionisio Almonte, and Rural Missionaries of the Philippines Agricultural staff Dominiciano Muya. Three others, Manuel Esteban, Reynaldo Ingal and Lourdes Quioc, were arrested based on warrants for Eduardo Esteban, Agaton Topacio and Eugenia Magpantay.

“The AFP’s practice of fabricating criminal cases, planting of evidence and numerous legal maneuvers has resulted to the persecution of many innocent civilians and activists,” said Palabay. “Such amount of money could have been used in a more productive manner.”