You Are Here: Home → 2014 → December → 13 → Military encampment of communities results in violence against women – group says

Davao City – A women’s group here said that women in the countrysides are increasingly vulnerable to sexual abuse by state forces occupying their communities.

According to Gabriela Southern Mindanao secretary general, Mary Ann Sapar, “If not as victims of rape and sexual abuse, they are wooed by soldiers to become their mistresses.” 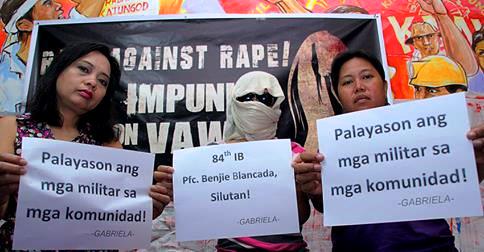 Rape by state forces came to light with a recent reported case in Bukidnon.

The accused military man belonging to the Armed Forces of the Philippines (AFP) 84th Infantry Battalion, however, is now on AWOL.

An army official confirmed Wednesday that Private First Class (Pfc) Benjie Blancada who was accused of raping a minor in Bukidnon went on Absence Without Leave (AWOL).

Blancada who was a member of the 84th Infantry Battalion based in Bukidnon, was identified by “Jessa”, a 16-year old mother from Sitio Maluos, Barangay Sinuda, Kitaotao, Bukidnon, in a press conference Tuesday, as the one who raped her.

“According to the commander of the 84th IB, the alleged perpetrator of that incident went AWOL,” said Lt. Col. Llewelyn Binasoy, battalion commander of the Civil Military Operations of the 10th Infantry Division.

The victim has previously demanded the military to show Blancada and make him accountable for his crimes.

Gabriela challenged the military to surrender Blancada as soon as possible.

“If the Armed Forces of the Philippines is really sincere in giving justice to the victim, they should be able to find him immediately since they know where he resides,” Sapar said.

Sapar added that “if the AFP fails to do it then they might be tolerating their members who are perpetrators of Violence Against Women (VAW)”.

Binasoy, however, said that even “in abscentia” the military will still “continue its investigation.”

“Definitely after the time period that he went AWOL, he will be dropped from the roll and he will be discharged dishonourably. And this will not preclude whatever criminal charges which will be filed against him,” Binasoy said.

Binasoy added that the 84th IB will be searching for Blancada and “a warning will be sent in all places where he might go, Mindanao or nationwide.”

But Sapar said that there is no single case where a military man who is involved in a rape case was convicted.

“They usually deploy their erring personnel to another place,” Sapar said.

Gabriela believes that the military could be “misleading the issue on rape”.

“Rape is rape, regardless if they have a relationship or not. Even a married woman can file a marital rape case against her husband,” Sapar said.

“The army’s statement that this is a “personal” issue misleads the issue on rape and they do not recognize that this is impunity against women by men in uniform,” Sapar said.

Gabriela said that VAW cases perpetrated by men in uniform are alarming.

“One soldier came from the 80th IB, while two from the 76th IB,” Sapar said.
Gabriela national office has recorded 32 cases of rape involving military men.
Sapar said that there are a lot of unreported cases citing the victims fear to report the case or because they are made to agree to just settle the case.

Jessa said that Blancada was reported to be involved in another rape case where the victim’s family was paid.

“They said that he had another victim but it was settled after paying money. That’s why they were encouraging my husband’s grandmother to settle because they say we will be paid with a million pesos,” she said.

Jessa, however, said that she will pursue the case against Blancada.

According to the Annual Comparative Statistics on VAW by the Philippine Commission on Women – Region 11 (Davao) posted as the second highest reported VAW cases with 4,411 cases accounting for 18.5 percent of the total reported VAW cases nationwide from 2004 to 2013.