MANILA – Like every overseas Filipino worker leaving the country, Ofelia Bao dreamt of providing her children a good future.

The remittances coming from her husband, who has been working as a furniture designer in Morocco for ten years, could not cover the family’s expenses. At times, he would send P7,000 (US$156) only, not enough to shoulder the basic needs and education of their two daughters. This compelled Ofelia to work as a domestic helper in Saudi Arabia in May 2014. In less than two weeks though, she experienced physical and verbal abuse from her employer.

“I would clean three houses each day,” Ofelia told Bulatlat.com. “And I was fed with little food. One meal is a piece of bread or five spoons of rice.” On several occasions, at the slightest mistake, her employer punched her. At one time, her male employer pointed a gun at her.

How Ofelia escaped hell is an experience she would not forget. She went to the office of the agency and called up the Philippine Embassy for help. She said it was not until members of the Migrante Middle East intervened that the Philippine Embassy officials took on her case. She came home in September, still alive but deep in debt.

Ofelia joined hundreds of OFWs in a protest action, Dec. 18, at the foot of Chino Roces (formerly Mendiola) bridge. They called for the ouster of President Benigno Aquino III for the worsening conditions of OFWs.

Seven OFWs have been executed under the Aquino administration, the highest since the labor export policy began in the 1970s, according to Migrante International. Five were executed in China, one in Saudi Arabia. One OFW was abducted and killed in Libya.

Garry Martinez, chairman of the Migrante International, lamented that the Aquino administration “has shown neither transparency nor accountability for failing to save the lives of our OFWs on death row.”

According to the monitoring of Migrante International, there are 123 OFWs on death row and 7,000 OFWs in jails abroad.

The largest global alliance of OFWs has criticized the Aquino administration for putting a ceiling on the legal assistance extended for every OFW in distress.

In a report, Foreign Affairs Secretary Albert del Rosario said that only P7.8 million ($174,000) of the P60-million legal assistance fund ($1.34 million) (LAF) available for 2012 was utilized. He said that from January 2011 to August 2012, only 196 OFWs have received help from the DFA’s legal assistance fund and attributed this to “the limits set by RA 10022 or the Migrant Workers and Overseas Filipinos Act of 1995.” Sections 18 and 19 of the law do not stipulate the limitations cited by del Rosario.

Martinez said thousands of OFWs had been stranded in war-torn areas such as Libya and Syria. Thousands more became victims of crackdown against migrants in Saudi Arabia https://www.bulatlat.com/2013/04/22/migrants-group-urges-aquino-to-act-with-urgency-on-stranded-ofws/ , United States, South Korea and Malaysia, among others.

Martinez said the Aquino administration is guilty of abandoning OFWs despite their contributions to the Philippine economy. 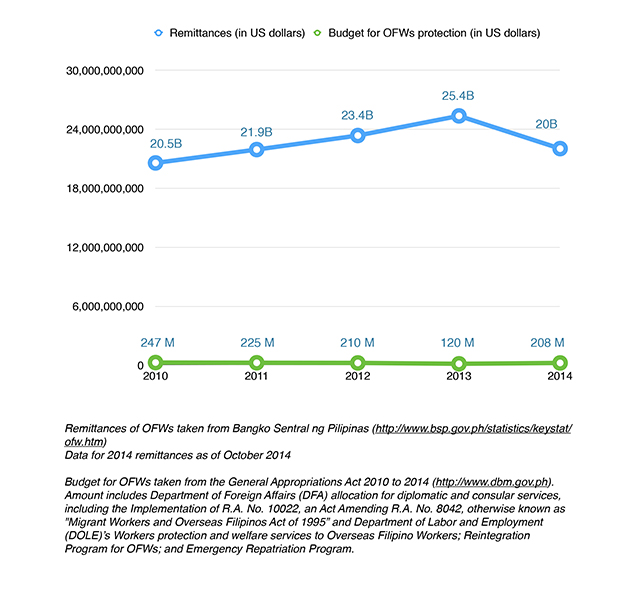 Under the Aquino administration, new fees were imposed on OFWs. Effective January 1, 2014, the Philippine Health Insurance Corporation (PhilHealth) increased the contribution of OFWs from P1,200 ($27) to P2,400 ($54). Insurance coverage for OFWs has also become mandatory since November 2010. The P550 ($12) terminal fee has also been included in the plane ticket of OFWs. Section 22 of the Republic Act No. 10022 or the Migrant Workers and Overseas Filipinos Act of 1995 exempts OFWs from paying travel tax and airport fee.

In one year, the government collects a staggering P53.47 billion (US $1.2 billion) every year from OFWs. According to 2011 POEA accomplishment report, 4,624 overseas Filipino workers leave the country each day.

In the seventh Congress of Migrante International held in Manila in December, 70 leaders and representatives from the Philippines and 16 other countries unanimously called for Aquino’s ouster.

“We only wish our government values OFWs,” Ofelia said.