Ruby and Seniang: A tale of two typhoons

When Super Typhoon Ruby (international name Hagupit) approached the Philippines early this December, the Aquino administration made clear its determination to tell the public and the world at large that it has learned its lessons from the tragedy and travesty of 2013’s Super Typhoon Yolanda (Haiyan).

Saying he “will not be patient” with excuses after Ruby, President Noynoy Aquino mobilized the various agencies under the National Disaster Risk Reduction and Management Council (NDRRMC) in what was lauded by United Nations Development Program administrator Helen Clark as “highly effective precautionary measures.”

Of course, this is disputable as Yolanda survivors under the People Surge Alliance monitored and reported serious problems in the conduct of preemptive evacuation and relief delivery—or lack thereof. Nevertheless, Clark said the national government’s Ruby response was a “clear reflection of the careful planning and strengthened institutional capacity of the relevant authorities.”

So where was this success story when Typhoon Seniang (Jangmi) deluged parts of Mindanao and Visayas in massive floods days before New Year’s Eve?

Seniang started as a low pressure area monitored by weather agency PAGASA as early as Christmas day, and developed into a tropical depression early in December 28. Seniang exhibited relatively weaker wind speeds, but like Ruby moved slowly at 11 kph (even slower than Ruby which registered speeds at 18 kph) and poured heavy rainfall that doubled in amount the following day.

That recipe proved deadly, with the official death toll already surpassing Ruby’s at 53 as of the afternoon of December 31—what a way to greet the New Year. NDRRMC officials are quick to posit the idea that the holiday lull has a lot to do with the high casualties in Seniang, pinning blame on residents who supposedly refused to spend the New Year in evacuation centers.

Given the alternative, however, I cannot blame the determination of the people, especially of Yolanda and Ruby survivors, to refuse evacuation. According to People Surge, recent typhoon survivors suffered for their early evacuation, as no food, water, and sufficient space could be found in designated evacuation centers from Eastern Visayas to Bicol.

What must be pointed out is that ill-preparedness plagued not only residents but likewise, and more critically, the government itself. Of course, our state weather scientists continued to make early predictions and warnings, but gone was the bravado exhibited by national and local governments during Ruby.

I was in Tacloban City even prior to Christmas, and did not hear a peep from local government. No showy press conferences. No Mar Roxas, Dinky Soliman or Voltaire Gazmin flying in like the self-styled God-given gifts that they were during Ruby. We suffered the days-long torrent of rains and the subsequent floods and landslides on our own, relying on our own monitoring and preparations.

From Ruby to Seniang, electricity was consistently disrupted and roads and bridges were consistently rendered impassable. The office space in which I was staying harboured still-unrepaired damages caused by Ruby, and we spent the night bailing water out of one of the rooms where the roof was still dislodged that allowed rain water to pour in with impunity. 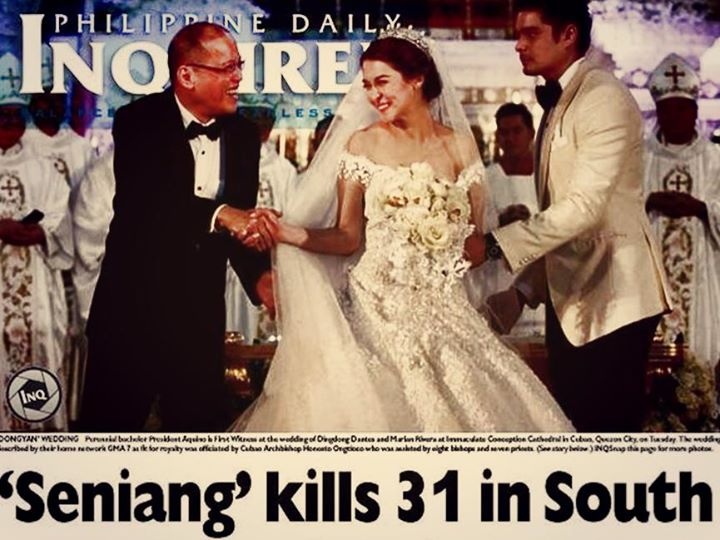 Imagine my indignation when I first glanced on the front page of the Inquirer on the morning of New Year’s Eve, seeing President Aquino with the so-called ‘DongYan’ celebrity couple in their wedding. The photo captured the president’s priorities perfectly.

The sleeper that is Seniang quickly dissipated any pretention of the government that it is well on the road towards disaster resilience. The tale of these two typhoons is a painful reminder to us how, at the core of the disaster problem, the long-running vulnerabilities of communities across the Philippines remain unaddressed as solutions presented by the duly-mandated government remain cosmetic at best, and corruption-driven at worst.

This is a tale that we should heed well going into 2015. At the middle of January, the holy pontiff Pope Francis will visit Tacloban City, and he will see a battered, weary people who have lived and breathed this tale, hungry for help, justice and change. The Pope will then be releasing a rare encyclical afterwards on the issue of climate change and the environment, exhorting the 1.2 billion Catholics around the world to take action on the growing crisis of global warming.

The typhoon survivors continue to demand justice. The Holy Father will journey to their ravaged lands to inspire them. Let us take the cue from them: it’s time we write a new tale of hope and justice for the Filipino people.

Leon Dulce is the campaign coordinator of the Kalikasan People’s Network for the Environment. He is also the spokesperson for Environmental Network against Pork Barrel and Corruption.