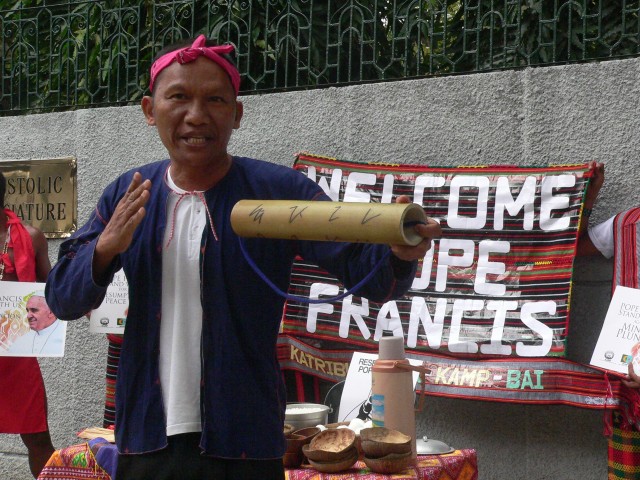 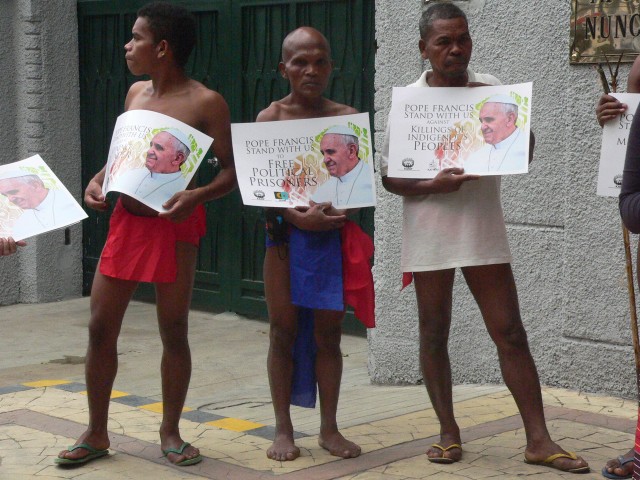 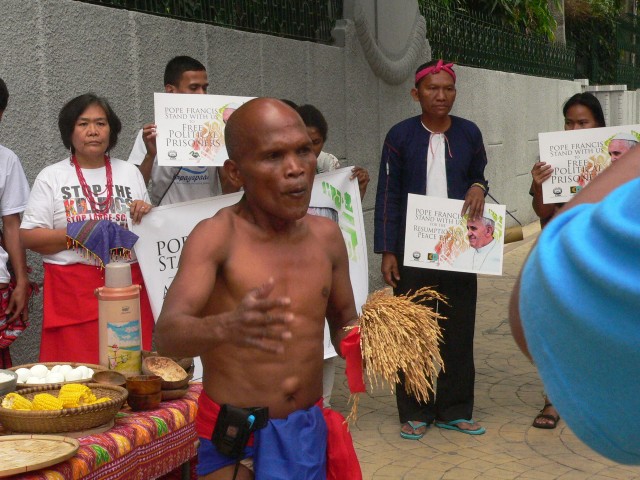 MANILA – Two days before Pope Francis’ arrival, indigenous peoples were the first to give a symbolic welcome to Pope Francis at 10 am today, January 13 at the Apostolic Nunciature on Taft avenue.

“We wholeheartedly welcome the Pope to the Philippines, and also to the lands of the indigenous peoples,” said Piya Macliing Malayao, national coordinator of the Kalipunan ng mga Katutubong Mamamayan ng Pilipinas (Kamp).

Malayao said that Pope Francis, like the indigenous peoples, had stood for the protection of the environment, being God’s creation, and should be nurtured while being utilized for the good of all. 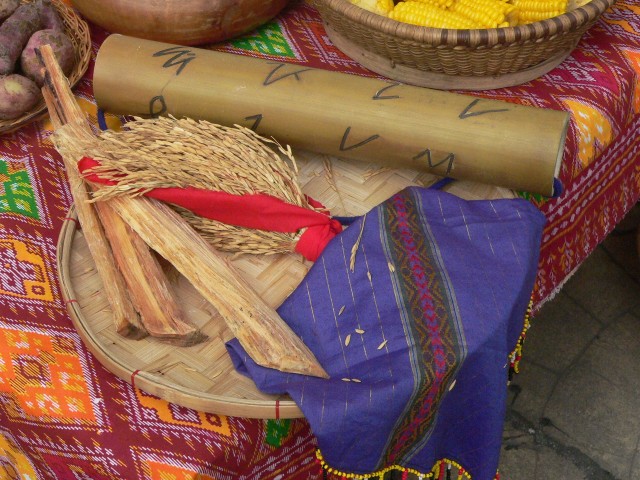 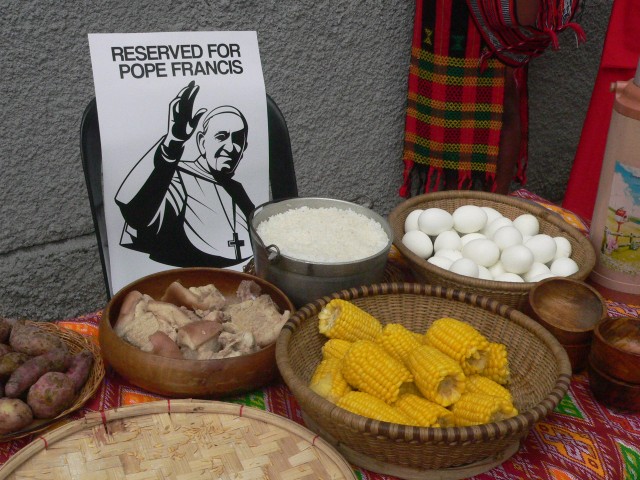 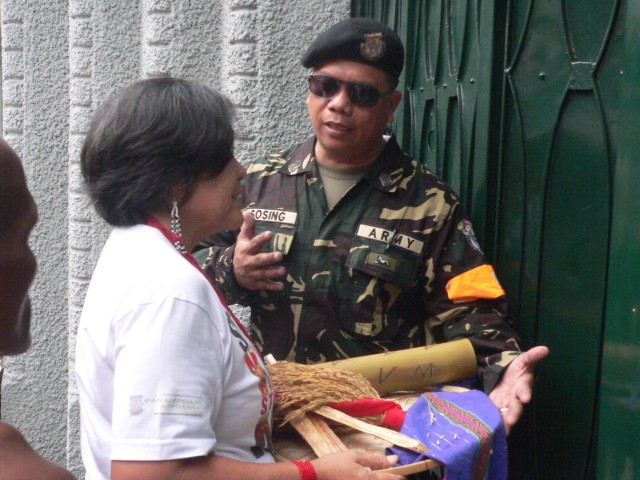 As a gesture of warm hospitality, indigenous Ayta, Igorot, Mangyan, Dumagat and Ati members of Kamp laid down in front of the papal nunciature a humble breakfast of yellow corn, rice, camote, stewed pork, boiled eggs, washed down with brewed coffee.

They held a short program in which they presented their four symbolic gifts to Pope Francis.

Danilo Elozando, an Ati, and spokesperson of the Kabataan para sa Katutubong Pilipinas, presented three pieces of saleng (pine firewood) from the Igorots of Cordillera representing “their aspiration for light, justice and respect of human rights.” 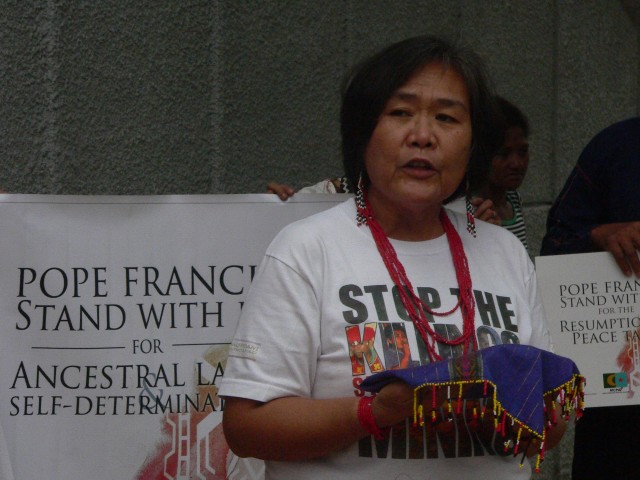 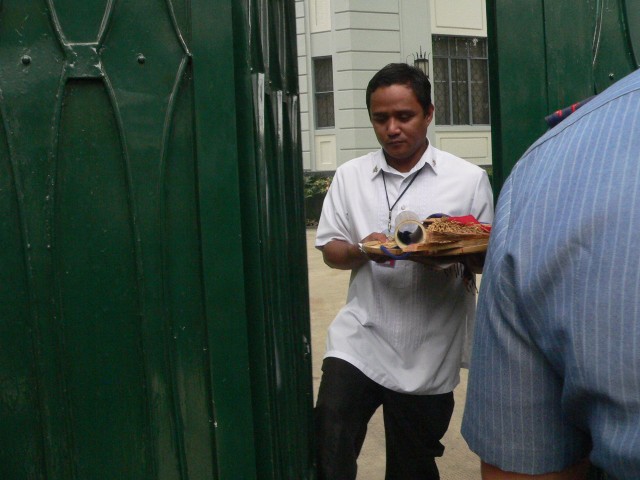 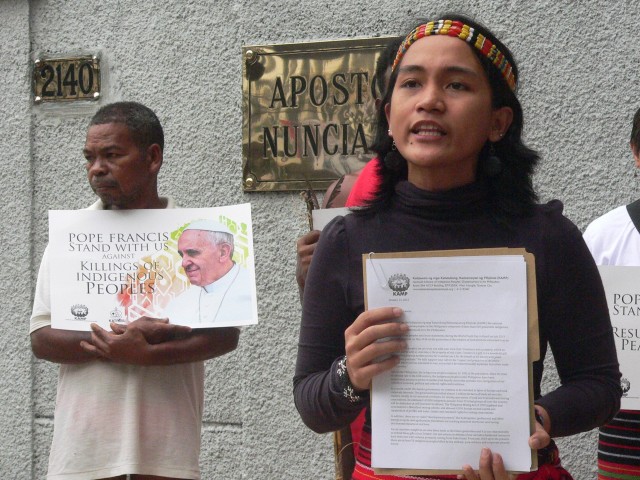 Kakay Tolentino, national coordinator of Bai Indigenous Women, presented a blue tubao adorned with beads from the Lumads of Mindanao for “the traditional political system of indigenous peoples and right to self-determination.”

The gifts and letter were received by Edward Camario of the Apostolic Nunciature. 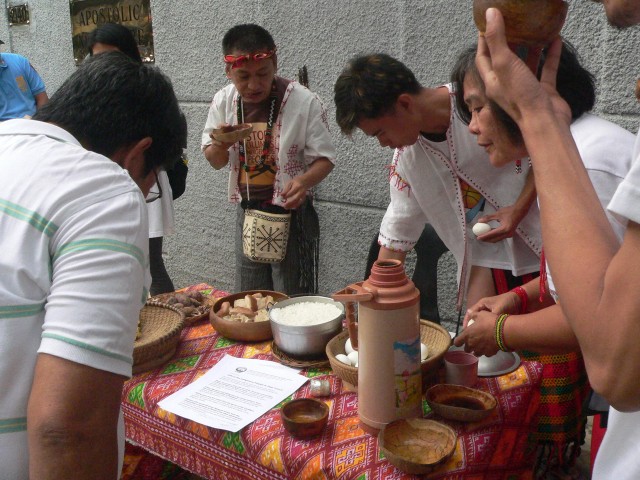 “We humbly ask for your intercession for the welfare and dignity of the indigenous peoples, the national minorities in our country and around the world, and the integrity of creation for the common good of the poor and oppressed,” said Kamp’s letter to the Pope.

“We hope that your intercession will make the Aquino government revoke the Mining Act of 1995, and in place enact the People’s Mining Bill that will redirect the liberalized mining industry towards genuine national development and genuine recognition of indigenous peoples’ rights for a dignified place in our country,” the letter added.

Malayao said they are asking for the Pope’s blessing as they carry on the struggle for their ancestral lands and right to self-determination, at the same time, they wish for the Pope to “have more strength as you go about your great mission for God’s most forsaken people.”

After the program, the indigenous peoples shared the simple fare, and even offered food to the police and military keeping perimeter security in front of the gate.