A Manobo leader and his son are keeping a tradition passed on through generations: the defense of their ancestral lands.

MANILA – They share the same name, bloodline and the indigenous chinky eyes. They both became exposed to human rights violations – thus, socially aware – at a young age.

Father and son Genasque Enriquez Senior and Junior are both children of the Andap Valley, the ancestral territory of the Manobos in Surigao del Sur province. Rich in timber and mineral resources, the area is much-coveted by logging and mining companies, and is fiercely defended by its indigenous communities. Among them are the two Genasques.

Senior, or Genasque, is 41, the secretary general of the Caraga-wide Lumad group Kahugpong sa Lumadnong Organisasyon (Kasalo). Genasque is also the national vice chair of Katribu partylist and its second nominee. The third among his four kids and his Junior, nicknamed Apad, is 12, a grade 6 student of the Tribal Filipino (Trifpss) in Diatagon village, Lianga.

Apad travelled for the first time to Manila in November 2014, along with 354 delegates of the Manilakbayan ng Mindanao 2014. Bulatlat interviewed Apad at the Manilakbayan’s camp at Liwasang Bonifacio. Genasque was noticeably absent, as he has made himself scarce to keep himself safe. 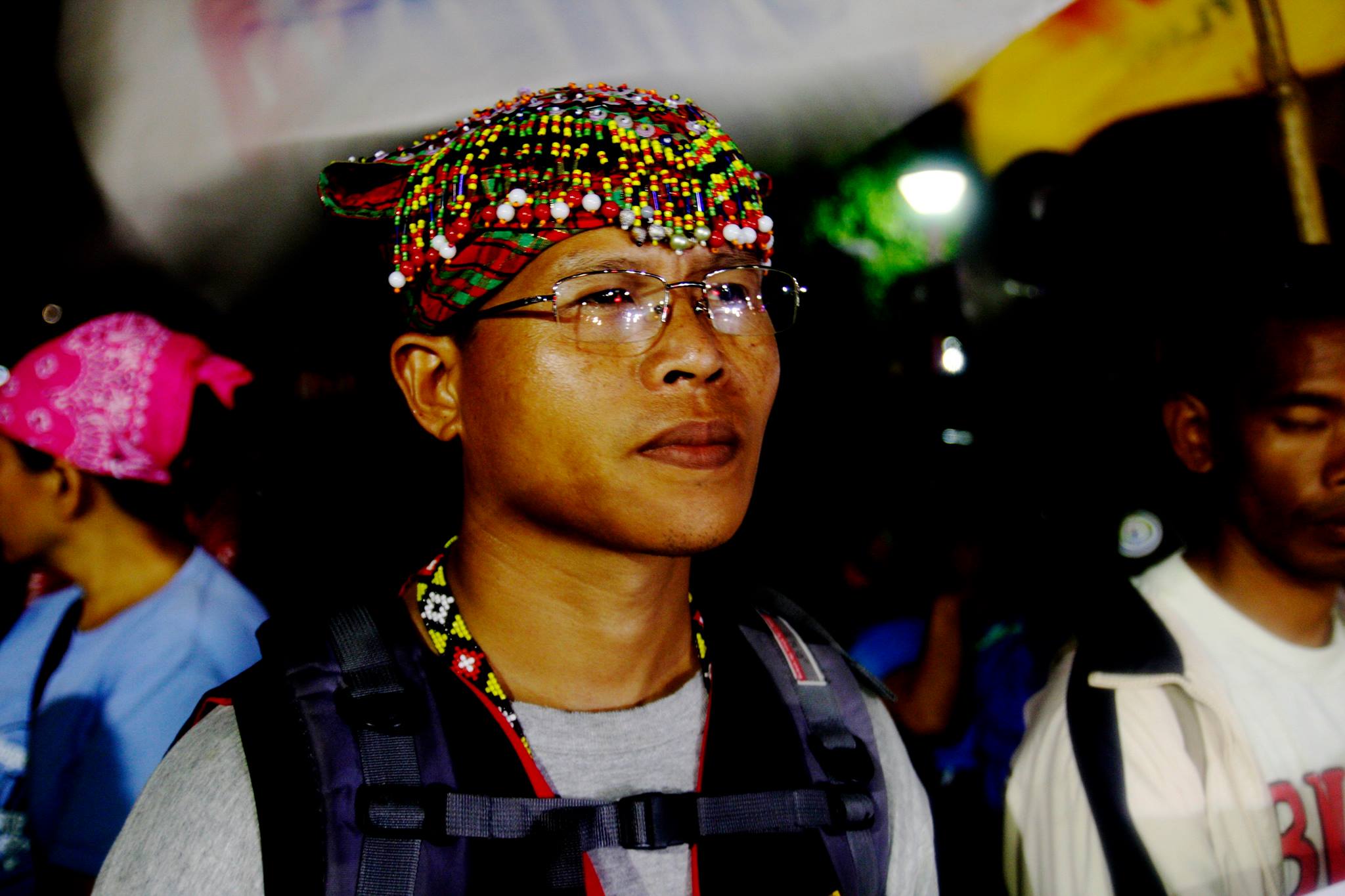 Genasque was arrested in Surigao City, Surigao del Norte on August 22, 2014, on trumped-up charges of frustrated murder in connection to a military action by the New People’s Army.

“My father is a good leader of our community,” Apad said, speaking in Filipino. “They make up stories and cases against him. Because they couldn’t stop my father from doing his work, they made up cases against him.”

Genasque was released after posting bail the next day, as supporters from the communities and the religious massed up outside police headquarters in Surigao City. It was the second time in two years that he and dozens of progressive leaders were falsely charged with criminal cases.

Genasque still speaks out against mining, human rights violations and other issues through a radio program in Surigao del Sur.

Genasque was Apad’s age when he was tortured by soldiers in the 80s.

He described his “harrowing experience” as a young boy in the hands of soldiers, in an interview with the Ecumenical Movement for Justice and Peace (EMJP) in 2009, for a study on militarization.

It was June 1984, and Genasque thought it wise to stockpile firewood to save himself the work when school opens. They had no clock or watch save for the hourly whistle blowing off from the nearby American logging company Lianga Bay Corporation. Eager to head to the forest to gather firewood, Genasque mistakenly left his house too early at 2 a.m.. He decided to just wait for the Lianga Bay service at the waiting shed, where he fell asleep.

“I woke up to something cold pointed to my head,” Genasque recalled it was a gun. “I saw two soldiers. They took me to their headquarters in Diatagon. They tortured me. They didn’t even consider that I was only a child. They tied up my legs, hung me upside-down, and then spun me around.”

“The next day was (Philippine) Independence day. They turned me into a punching bag,” he recalled. There were about 100 soldiers gathered at the camp for the occasion. They tied Genasque to a post, and as they jogged around, each passing soldier punched him.

“They didn’t hit hard, but after so many blows, I fainted,” he said.

Genasque said that it turned out that two children saw him being taken by the soldiers, and his parents and the elders had been looking for him. After four days and four nights at the military camp, he was able to come home. He said he still carries the injury from the torture, but more importantly, a lesson.

“Even in my young mind, I realized that I have to fight for my rights,” he said.

Genasque said that when the student movement started in schools, he readily joined mass actions, specially those concerning the Lumads. “I thought, I need to participate to assert and defend our rights,” he said. Because of his being active, he was branded a rebel and targeted by the military. One of his elder sisters almost got raped by soldiers who came looking for him.

As he got older, finished high school and became a leader, the surveillance and harassment continued.

On March 6, 2009, Genasque had just come from a meeting of the Kalumaran from Davao City, when he was accosted at a military checkpoint in Diatagon. The soldiers took his bag, which carried campaign materials against mining and militarization, and affidavits of victims of human rights violations. Soldiers interrogated him for four hours.

“They called me a subversive, that I was among those who ambushed them, that I was an NPA organizer. Wait until you get arrested, they said. Because they said they have an arrest warrant against me, for rebellion and multiple murder,” Genasque said in the EMJP interview.

The soldiers didn’t give back his documents. Seven soldiers followed him home, and when he got there, the soldiers repeated the interrogation, this time trying to entice him with projects for a school and roads for his community, in exchange for his cooperation.

“What’s your real motive?” Genasque asked the soldiers. There are government agencies that should implement those projects, for education, public works and social welfare, but why is the military really here? he asked them.

Karapatan-Caraga says that the repeated, intensive military operations are meant to pave the way for coal mining in Andap valley.

The unpublished study by EMJP said that in the 80s, the New People’s Army established a stronghold in the area, which limited extractive operations and consequently preserved the forest resources. At present, several logging companies operate in Andap Valley, but the area’s mineral resources, such as gold, copper, chromites and other minerals, remain untouched, said the EMJP study.

In 2009, the Department of Energy awarded Lodestar Consolidated Holdings the rights to mine 6,000 has. in Andap Valley. It was opposed by 22 Lumad communities under the Malahutayong Pakigbisog Alang sa Sumusunod (Mapasu), a member group of Kasalo. There was massive military deployment and operations, to supposedly purge rebels.

That year, as in the past, communities fled to escape the bombing, strafing, abduction and harassment.

Apad, like many villagers in Andap Valley, had been forced to repeatedly evacuate to evade soldiers.

“This time, we evacuated carrying the body of our leader, Henry Alameda,” he said, morosely.

Mapasu leader Henry Alameda was shot dead at his home on October 24, 2014 by suspected paramilitary men led by Datu Calpit Egua. Paramilitary forces had been trying to recruit other Lumads, to serve as augmentation force to soldiers during combat operations.

“They (state forces) had him but he still got out. Next time, they might kill my father, like what they did to Henry Alameda. Of course, I’m scared, because when you lose your father…that’s a problem,” he said, selecting his words.

Wise beyond his age, Apad said he and his siblings learn from their father, who shares stories with them about his work. But Genasque only need to add context to what Apad already sees and feels first-hand.

In his own community, Apad has seen and heard about soldiers harassing the datus, forcibly encamping in schools and homes, interrogating students. He had heard the sound of bombs, the military helicopters, the gunfires. In different evacuation sites, Apad had endured the cramped space, damp sleeping area, and lack of food. Then when evacuees return home, they find their crops rotten, their homes ransacked and vandalized, their schools destroyed. In October 2014, two farmers who were caught in military operations went missing. Four farmers also went missing in 2005.

Beyond the hardship, Apad has also seen the power of the community, of the tribe, as they performed traditional rites, moved as a collective to find sanctuary, and in mass actions to assert their rights.

To be a leader

“We want to tell the President to scrap the trumped-up charges against our leaders, and to stop militarization in our community, and to stop the big mining in Mindanao, because they destroy our forests. And if we lose our lands, we lose our life,” Apad recited, in the grim and determined, activist tone. In the Manilakbayan protest actions, he called for the scrapping of the Mining Act of 1995, and enumerated their demands in a manner apparently learned from older, more experienced activists.

But he was more candid when asked what he thought of Manila.

“No one should be poor, or rich. We should all be equal. So Filipinos can leave peacefully. Unlike now, there are those who take advantage. There are so many empty buildings, yet there are so many beggars who live on the streets,” Apad observed about Metro Manila.

Then he compared Manila to his home in Diatagon, with words that are childish, wise and true:

And that is why Apad said he wants to be a good leader like his father, who also followed his own father, who is a datu (chieftain) and a leader. “Because the junior follows in the footsteps of his father,” Apad said, to defend the “yutang kabilin (ancestral lands).”

Just like the many fathers and sons, mothers and daughters of the Manobo tribe, they are defenders of Andap Valley.