“The DENR should respect the political will of the frontline communities who have borne the brunt of OceanaGold and FCF Minerals’ pollutive and destructive operations.”

MANILA – Can mining companies just ignore and violate the will of the communities affected by their operations?

For environmental activist group Kalikasan People’s Network for the Environment (Kalikasan PNE) and various groups from the Cagayan Valley region, such a thing should never be allowed.

They trooped in front of the national office of the Department of Environment and Natural Resources (DENR) in Quezon City Tuesday, January 27, pressing for the immediate halt in large-scale mining operations in Nueva Vizcaya. If the DENR would act on their demand, it would implement the provincial ordinance against open-pit mining, they said.


Kalikasan PNE was joined by the Alyansa ng Nagkakaisang Novo Vizcayanos para sa Kalikasan (ANNVIK), Save the Valley! Serve the People! and the Kalikasan Youth Cagayan Valley. The protesters were blocked at the DENR gates by security guards who reinforced the gates with additional chains of steel. They also put an additional fence with barbed wire to bar the activists.

An environmental ordinance banning open-pit mining in Nueva Vizcaya has been passed by its provincial government recently, but the biggest mining companies have ignored the ordinance, claiming it was not retroactive and that it did not cover the existing mining operations.

OceanaGold and FCF Minerals are given license to conduct mining operation in the province under the Financial and Technical Assistance Agreements (FTAA) issued by the national government, with life span of 25 years renewable by another 25 years. Oceana Gold has officially been in the extraction phase since April 2013 while FCF Minerals has been in the construction phase since 2012.

OceanaGold claims ownership and control of mine operations in the high-grade gold-copper Didipio Mine located 270 kilometres north of Metro Manila. Its FTAA-001 straddles a mountainous region between the provinces of Nueva Vizcaya and Quirino in Northern Luzon.

The mining company said in its website that in the 16-year life of its claim on Didipio Mine, its nominal production will be 100,000 ounces of gold and 14,000 tonnes of copper.

FCF on the other hand is set to extract and process gold as primary product and molybdenum as secondary product from its claimed mine sites in 3,093 hectares of Runruno village, Quezon town, Nueva Vizcaya, some 200 kilometers from the capital in Manila. It expects an average production of 96,700 ounces of gold per annum over a mine life of 10.4 years.

Both mining operations have been met with public opposition from the start.

“Local ordinances have been passed in Nueva Vizcaya as a clear expression of the people’s opposition to these mines and as a legitimate policy basis for the stoppage of these projects,” said Clemente Bautista, national coordinator of Kalikasan PNE. 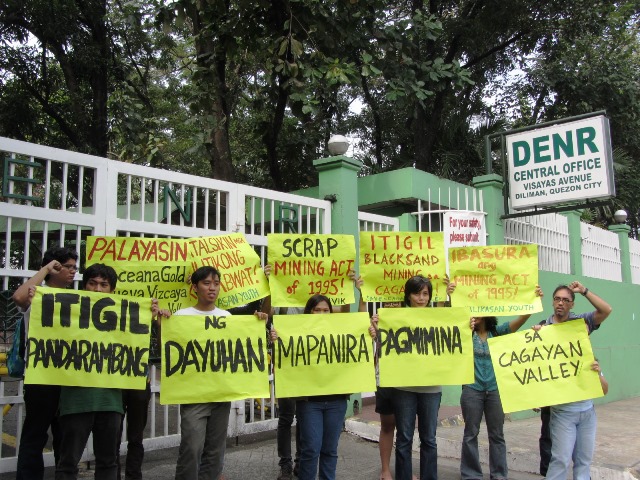 Bautista says his group is supporting the demand of Novo Vizcayanos and the people of Cagayan Valley to halt the mining operations of Oceanagold and FCF Minerals because aside from the opposition of the locals, Nueva Vizcaya is the Cagayan Valley’s Watershed Haven. Kalikasan says it is a compelling enough reason for the government to spare the province from further environmental pollution, destruction and resource depletion.

“Recent scientific studies revealed that the operations of both OceanaGold and FCF Minerals have resulted in the clear pollution of different freshwater ecosystems, biodiversity loss within mine operations and its adjacent environments, and the socio-economic and cultural dislocation of different affected communities,” noted Karl Begnotea, research biologist of Kalikasan PNE.

Citing the results of a 2014 Environmental Investigative Mission (EIM), high levels of copper, a toxic heavy metal, were found in the sediments and water samples from the river affected by operations of OceanaGold and FCF. Also, scientists have found out that the populations of organisms that usually thrive in the affected river are lower compared to nearby unaffected rivers they tested in their Environmental Investigative Mission.

Since OceanaGold and FCF began operation in the area, several cases of human rights violations have also been recorded. Instances of threats, intimidation and deception by the mining companies were documented, said the Kalikasan PNE. The residents said restrictions imposed on them by the companies have limited their activities and hampered their livelihood.

Bautista asked the DENR to listen to the demands of the people of Cagayan Valley who, he said, travelled hundreds of kilometers away from their communities to show their determination in protecting their livelihood and environment. He said in a statement “The DENR should respect the political will of the frontline communities who have borne the brunt of OceanaGold and FCF Minerals’ pollutive and destructive operations.”