“The OFWs contribute so much to the country’s economy. They call us the modern-day heroes, but they treat us this way. Is this how you treat heroes? POLO-OWWA has the funds, yet they are taking a long time to bring us home.”

Pope Francis may have thrilled the country during his visit, but his reminder to recognize migrant workers and heed their needs is yet to have its effect on government officials and recruitment agencies.

Government has yet to act on a request for repatriation by a group of Overseas Filipino Workers (OFWs) in the Kingdom of Saudi Arabia (KSA) who had complained of labor abuse by the Rajeh H. Al Marri & Son Company (RHM).

Roy Pagelion, 39, worked as a welder for the company in the RHM-Abqaiq Camp. He was among the 39 workers who filed charges against RHM and requested for repatriation.

In a Skype interview with Bulatlat, Pagelion shared various labor malpractices that he and his fellow workers experienced in the hands of RHM. 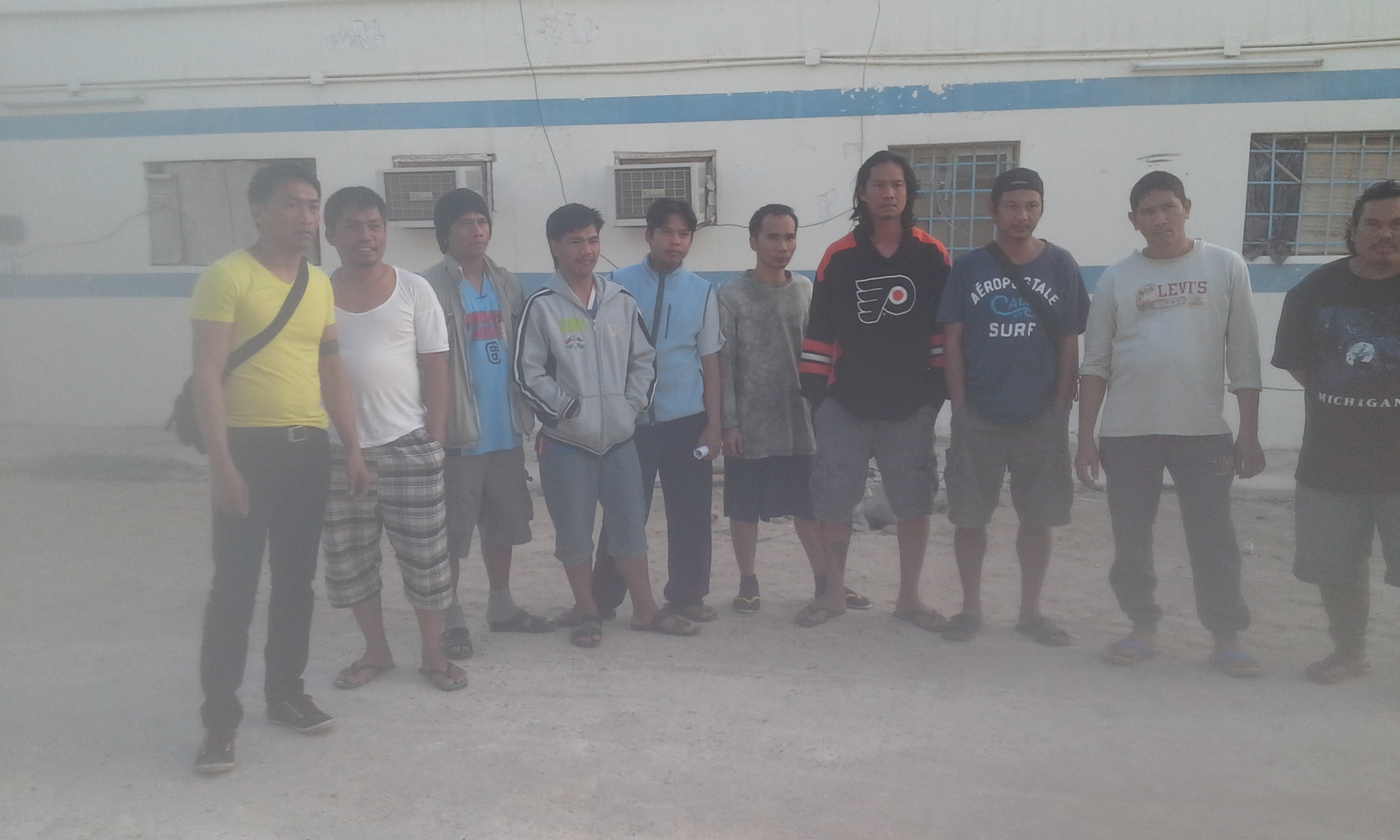 Pagelion said that he started working in June 2014, but he was not given any salary for six months. “It was only on December 25 that I got my first salary,” Pagelion shared.

Pagelion said that many of his fellow workers did not receive their salaries monthly; instead it was given to them every three months. He added that they were also not given overtime pay.

“It’s hard because our families depend on us, but we can’t send them a cent because we’re not getting paid,” he lamented.

Pagelion also shared that most of them work without IQAMA or resident permit, which also serves as working visa. He said this puts the workers’ safety and security at risk.

“Most of us don’t have IQAMA up to now. We can’t go out anytime,” he explained. “We’re afraid because we could get arrested anytime, because technically, we’re illegals.”

Pagelion added that many of the workers’ contracts, which they agreed upon with their respective agencies and were approved by the Philippine Overseas Employment Administration (POEA) in Manila, were invalidated by RHM when they started working.

As early as August 2014, Pagelion said he already confronted his company and the agency that deployed him and expressed his desire to be sent back to the Philippines. Pagelion added that he sought help from a Manila-based broadcaster, who helped him get in touch with the POEA.

On October 15, 2014, Pagelion shared, he received information that the POEA in Manila has issued an order of repatriation for him; however, the POLO-OWWA in the KSA did not forward the order to him.

“The Manila office said there was already an order. But the Saudi office said they did not know about it. I don’t know who’s telling the truth,” said Pagelion. “I’ve gone through a lot of process in my request to be repatriated, but nothing’s happened,” he said.

On December 2014, Pagelion got in touch with Gil Lebria of Migrante Eastern Region in Damam, KSA. Pagelion said Lebria assisted him as well as other workers to get help from Migrante International, a global alliance of Overseas Filipino Workers and their families.

“With the help of Migrante Middle East and Migrante Manila, a suspension order was issued for Joseline Agency and RHM on December 17, 2014,” Pagelion said.

Both the Joseline International Manpower Corporation (formerly Paras Enterprises), a Manila-based deployment agency and the RHM were ordered by the POEA to process the repatriation of Pagelion within 15 days. However, Pagelion has yet to be sent home.

On January 6, Pagelion said the RHM brought him to the POLO-OWWA Al-Khobar, where he met with the Labor Attaché to Al-Khobar, KSA, Alejandro Padaen, RHM Manager Charles Evangelista Guzman, and Noel Arriesgado of the Joseline Agency.

Padaen explained to Pagelion during the meeting that he needs to resign from work to be repatriated, as RHM policy dictates.

“They said it was company policy that I have to resign to be repatriated. In my case, they said that it would appear that I am resigning because I don’t want to work there anymore,” Pagelion said. “I told them, it’s not that I don’t want to work, it’s their unfair practice and other irregularities which made me want to leave.”

On January 6, Pagelion returned to Padaen’s office to sign a voluntary resignation letter in front of the labor attaché. On the same date, the RHM gave its word that they will process Pagelion’s repatriation and promised to send him home by January 25. They, however, did not put the agreement into writing.

Pagelion added that the said meeting and signing of resignation letter was not documented. So he requested for another meeting to document the agreement. However, on January 14, the agreed date of meeting, representatives from RHM and Joseline did not show up.

Pagelion said Padaen clarified to him that he did not force him to sign the resignation letter. However, Pagelion insisted that he may not be forced by the labor attaché, but he was encouraged.

Pagelion also noted the questionable presence of Noel Arriesgado as representative of Joseline Agency. He learned from Arriesgado when the latter called him that aside from representing the agency, he also serves as a volunteer for POLO-OWWA Al Khobar.

Pagelion remains unemployed while he awaits the order of his repatriation to be processed by the POLO-OWWA. 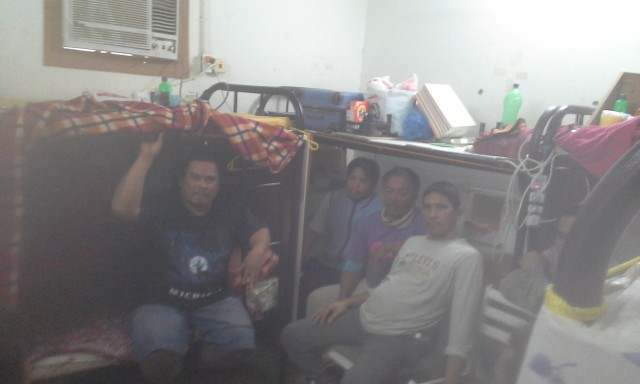 “It’s hard because our families depend on us, but we can’t send them a cent because we’re not getting paid,” lamented OFWs in RHM. (Photo courtesy of Roy Pagelion)

Meanwhile, another RHM worker narrated to Bulatlat.com his share of misfortune in the hands of his employer. Larry Maano, 48, is a truck driver for RHM.

Similar to Pagelion’s experience, Maano was forced to sign a new contract when he arrived in KSA.

“An HR official of RHM ripped my contract before me. They said it’s no longer effective. But they didn’t explain why,” Maano shared.

Maano added that the contract stated that they will be given 350 SAR ($93) for food allowance. However, the company provided them food that was not worth the said amount.

“Our meals consisted mostly of squash and gourd, which could not cost 350. We work so hard, but that is all they feed us,” he added.

Maano identified the RHM representative as Charles Guzman, a Filipino who works for RHM as HR consultant in KSA.

Maano said it was disheartening that fellow Filipinos who were supposed to help them took the side of foreign employers.

“In distant lands like Saudi, you would expect a fellow Filipino to help you,” he lamented, that instead, they took advantage of the workers.

Pagelion and Maano, together with the other 37 workers, hope that the government will take action and send them home immediately.

“We’re in a dire situation, far from our families. They hoped that we will have a comfortable life as we left to work abroad, but then this is what we experience. We don’t have money, we can’t send anything to our families, and our security is threatened,” Pagelion appealed.

“The OFWs contribute so much to the country’s economy. They call us the modern-day heroes, but they treat us this way. Is this how you treat heroes? POLO-OWWA has the funds, yet they are taking a long time to bring us home,” he added.

On January 20, the Manila-based deployment agency, Joseline International Manpower Corporation, sent the POEA a letter of reply to workers’ allegations of labor abuse.

In the letter, the agency stated that a meeting was held between the representatives of RHM and the workers to discuss the latter’s complaints and request for repatriation last January 11.

The letter said that the IQAMAs of the workers have already been processed and completed, and that the salaries of the workers will be released before January ends. However, the agency claimed that the overtime pay that workers claimed to have been withheld are fictitious.

Joseline Agency also stated that they will be doing another round of inquiry to the involved workers on whether they still wish to be repatriated even after their requests and complaints have been addressed.

On February 2, the families of RHM workers in Manila are set to have a dialogue with the officers of POEA and representatives of Joseline Agency to discuss the repatriation request of the OFWs.

Aside from the request for immediate repatriation, the RHM workers also demand that both the RHM and the Joseline Agency will be banned from operating and employing OFWs.