DAVAO CITY – Non-government groups that conducted a joint fact-finding mission in Maguindanao Feb 9 learned from residents that spy drones made sorties in the area for seven days prior to the deadly battle that killed 44 police commandos.

The group said report from several witnesses, all of them residents, indicate a deeper involvement of American troops in the Mamasapano incident.

“Several residents from Tukanalipao, Pidsandawan, Lusay and Tuka submitted sworn affidavits saying they saw drones flying above their communities for at least seven days before the bloody encounters on January 25,” the group said.

The residents told the group the “airplanes twinkled at nighttime.”

The fact-finding group is composed of about 100 individuals with the Moro group, Suara Bangsamoro, Kalinaw Mindanao and the Moro human rights group Kawagib, Legislators from the Makabayan bloc in Congress joined the mission.

The group was able to interview witnesses who claim they saw among the dead SAF troopers one “white-skinned, tall, blue-eyed with narrow, long nose.”

Bayan Muna Rep. Carlos Isagani Zarate said the disclosure from residents would indicate that the US government and President Benigno Aquino III were the ones behind the operation to capture or neutralize Zulkifli Bin Hir Marwan, a prized target of the US government.

“Mindanao is the second front of the US war on terror and the US is the only one with such bombs and drones,” Zarate said.

Zarate said the Armed Forces admitted to using US-provided “smart bombs” which were used in an operation against Marwan in 2012 but which he escaped from unharmed.

“Aquino is aware of the previous Oplans (operation plans) against Marwan including the said Oplan Wolverine because it was planned and funded by the US,” he said.

Zarate said “it is the reason why Aquino should talk on the incident but his allies in the House of Representatives have shot down even our very respectful invitation to him to appear in the hearings.”

“It seems that there is an Oplan Save the King in place and the police and military are implementing that by playing with words like “advice,” “coordination” and “command responsibility” to save Aquino,” he said.

“The BBL is now is now in the emergency room, approaching death or likelihood of being watered down,” said Zarate.

“Marwan is on the target list of the US’ Federal Bureau of Investigation, the reward money is even in US dollars,” she said. 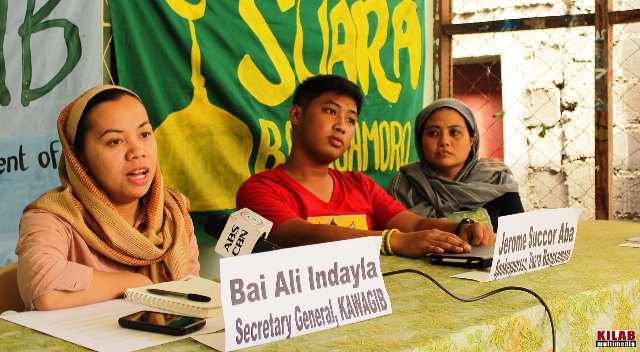 Indayla said the marsh, which spans 220,000 hectares along North Cotabato and Magindanao, “contains still untouched millions of cubic meters of natural gas which Moro communities are defending with their lives.”

“That is why even if the BBL is signed into law, but with US still meddling in our affairs because of its interest in the Liguasan Marsh, there will still be attack on Moro communities,” she said. Reposted by