“Save our Nation Movement” is proposing the formation of a transition council composed of leaders of various sectors with proven integrity, competence and experience at public service.

MANILA – Because only one impeachment proceeding against an elected leader can be tackled in Philippine Congress per year, individuals and groups fed up with President Noynoy Aquino’s “fatal mistakes” launched Thursday (Feb. 19) a signature drive demanding his resignation.

For starters the signature drive is to be held in major schools and universities, led by academicians, teachers’ and students’ groups grouped under the “Save Our Nation: Aquino Resign! Movement.”

“Clear grounds why Aquino has to resign have been piling up,” said ACT Teachers’ Partylist Rep. Antonio Tinio at a press conference. He enumerated some of the biggest and most glaring: the unconstitutional DAP (Disbursement Acceleration Program) of the “pork barrel king;” Aquino’s role and responsibility in the Mamasapano incident, from authorizing and implementing the operation to his actions when the operation was botched, including his administration’s attempted coverup; his authorization of the illegal participation of US troops, among others.

From pork barrel to Yolanda (Haiyan) to allowing US intervention in local affairs and combat operations, the leaders of ‘Save Our Nation Movement’ said, President Aquino has violated the Philippine Constitution and proved insincere toward the Filipino people whom he calls but never treats as his “boss.” 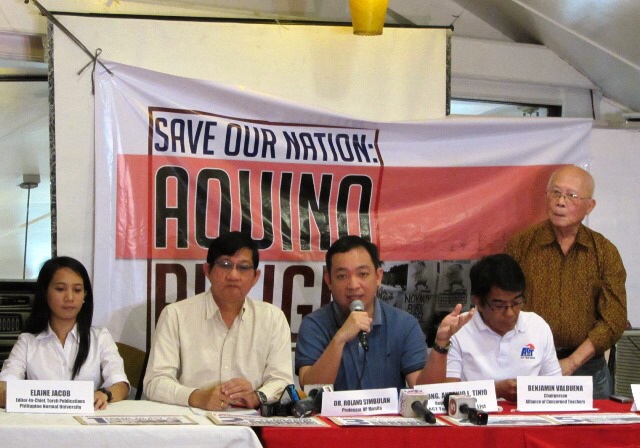 National Artist for Literature Dr Bienvenido Lumbera said at the press conference that one of the “gravest reasons” why President Aquino has to resign is his attempts at covering up the US role in the Mamasapano incident. In January 25, elements of the Special Action Force of the Philippine National Police were deployed in Mamasapano, Magindanao supposedly to arrest a man tagged by US government as “terrorist.”

So far, the reported extent of US involvement covers activities that are banned by the Constitution, ACT Rep. Tinio and UP Professor Roland Simbulan said.

ACT Teacher’s Rep. Tinio dared Aquino to present a legal basis for why the PNP (which is under the DILG) was in an operation with US special forces. Tinio belied the claims of the Department of Foreign Affairs and of some senators that tried to defend or lessen the already reported US involvement in Mamasapano incident.

Tinio pointed out that the Mutual Defense Treaty and the Visiting Forces Agreement and even the terms of reference guiding the joint activities of US and Filipino troops do not include participation of US troops in combat operations or intervention in local affairs. But the Mamasapano had involved the police, not the AFP, and even the ones who asked for emergency medical retrieval were from the police, not the local armed forces. From these alone, Tinio concluded, the Mamasapano operation has no Constitutional cover and as such is illegal. 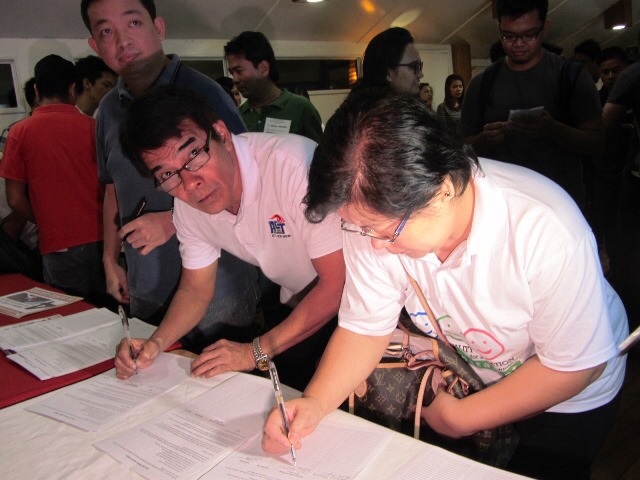 “President Aquino should resign because of his repeated violations of the Constitution, his haciendero arrogance and insensitivity to Filipinos,” National Artist for Literature Bienvenido Lumbera said in Filipino. The national artist decried Aquino’s repeated claim that his boss are the people, when “he never respects their views and feelings.”

Lumbera lashed at the “arrogant haciendero” mentality of the president that prompted him for example to prioritize being in a car assembly plant than condoling with relatives of the killed PNP-SAF. Lumbera also cited as example of Aquino’s isolation from his so-called boss his having ignored the masses’ heroine as symbolized by actress Nora Aunor which Aquino excluded in the proclamation of last year’s National Artists.

Like her fellow leaders from schools and universities, she explained that a president as “useless” as Aquino has been in responding to the relief and rehab needs of disaster survivors, or in addressing the worsening miseries of teachers and students in the country, has no business staying in office.

“President Aquino is doing nothing for the interest of the working majority of Filipinos,” leaders of the Save Our Nation said. In the face of continuing disasters, Aquino continued to do nothing, because he thinks ordinary Filipinos can recover by themselves, Dr Ampuan said.

“President Aquino continues being arrogant over evidences of his uselessness and pro-US actions because he seems to think he can get away with this given his family name,” said Dr. Lumbera.

The Aquinos benefited from the first people power uprising because it gave them the presidency.

But the “Save our Nation Movement” asserts at the press conference they are not out to replace the president with just another similar representative of elite and pro-US interests.

She challenged the country’s media to expose all those accountable to the carnage in Mamasapano, and she warned that the usual heaping of the blame on the Moros will not cut it.

As a future teacher, she worried that with the presence of US forces in the Philippines — “many aspects of our history are no longer being detailed in our textbooks.”

President Aquino’s policies and decisions “kill Filipinos,” said Sarah Elago, president of NUSP. “Not just police forces, but our dreams, too, are being killed under Aquino’s policies,” she said. She cited how, no thanks to the “disaster king” who is also “king of tuition fee hikes,” scholars are being driven out of schools and some, like Kristel Tejada, have committed suicide.

“To replace Noynoy with someone just like him — that’s a big no-no,” said Benjamin Valbuena, president of ACT (Alliance of Concerned Teachers).

“Save our Nation Movement” is proposing the formation of a transition council composed of leaders of various sectors with proven integrity, competence and experience at public service. It wants to “overhaul the Comelec” to eradicate cheating at the upcoming elections, and to form a Constitutional Convention to draft a new Charter for the Philippines.

“We do not want another puppet who will allow the US to dictate upon us,” Valbuena said.

Against cynicism that that is hard to do, Valbuena expressed optimism. “Everything is possible,” he said. Pointing to the peoples’ experiences after People Power 1 and 2, which changed only the leaders installed but not the system, he said the same crony-system where the poor are exploited and oppressed remained. “What we haven’t tried yet is installing leaders who represent the sectors,” Valbuena said, referring to workers, teachers, students and youth.

The Save our Nation: Aquino Resign! Movement started collecting signatures nationwide to gather support. They announced forums and protest actions to be held in campuses nationwide.

They plan to hold bigger protests starting February 25, a month after Mamasapano incident and 28th anniversary of EDSA People Power 1.