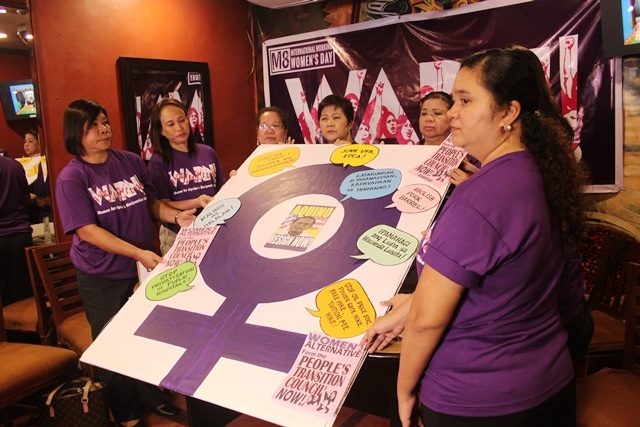 “We call on not only to women – mothers, daughters, and sisters – but to everyone to take a stand against the administration that perpetuates violence and corruption.”

MANILA — Gabriela Philippines, together with women leaders and personalities from different groups, launched the Women for Aquino’s Resignation Now! (WARN!) campaign in a press conference at Tomas Morato, Quezon City on Feb. 28, commencing the celebration of International Women’s Month.

Gabriela Secretary general Joms Salvador said WARN! is a campaign of women groups to end the Aquino administration to prevent further disaster and cease war and violence, especially in Mindanao. It also pushes for the formation of a People’s Transition Council that will temporarily take over the leadership once Aquino steps down.

“In the five years of Aquino’s leadership, the women sector got nothing but broken promises and lies,” Salvador said. “We are tired of his excuses and senseless explanations as to why corruption, violence, and disasters persist and people remain poor. Five years are more than enough to assess his incompetence to lead the country,” she said, noting that Aquino had too many chances to prove his worth as a leader but still failed.

Other members of the panel in the press conference were Mae Paner of Scrap Pork Movement and Gabriela Women’s Party representative Luz Ilagan.

Paner said that, after her careful observation of Aquino’s decisions on matters concerning the nation, she realized that Aquino’s “tuwid na daan” is a sham.

“As I watched Aquino after I voted for him, I realized that the end of his righteous path is a ravine,” Paner said. “I have joined the women here today because I’m among those who suffer as a result of Aquino’s wrong decisions.”

“We are today one in shouting: Aquino Resign Now!” Paner said.

Meanwhile, Ilagan explained why people should demand and campaign for Aquino’s immediate resignation.

“The call is not just ‘Aquino resign’, but ‘Aquino resign now’. He should step down from the leadership now. We shouldn’t wait any longer because there just may be another disaster waiting to happen if he stays making unsound decisions,” said Ilagan.

Ilagan also highlighted how Aquino failed the people many times, from the government’s inefficiency in preventing and acting on natural disasters like Sendong, Pablo and Yolanda, to unrelenting issue of corruption in DAP and PDAF, and to the most recent show of irresponsibility in the Mamasapano incident.

Former Navy Lieutenant and Balikatan Exercises whistle blower Nancy Gadian, who also sat as one of the panel members in the press conference, also expressed her dissatisfaction on the Aquino administration, especially on how it handled the Mamasapano incident. 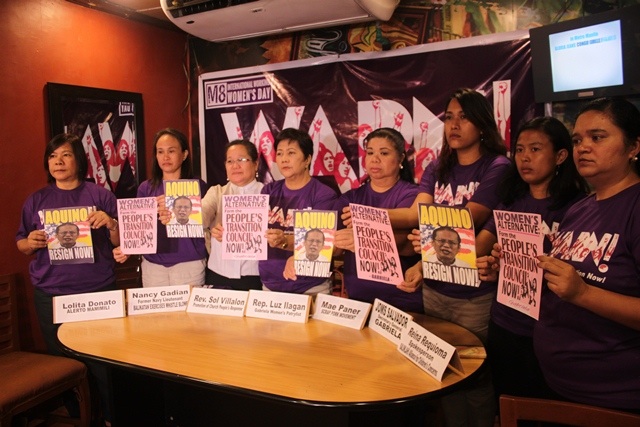 “The SAF officers were used as sacrificial lambs,” Gadian said.

Gadian, who was born, raised, and worked in Mindanao for many years, also raised her observations which, she said should lead the people to the truth.

“Why did Purisima take charge of the Oplan Exodus when he was already suspended? And why did the generals kept mum during the senate hearing, as if they were trying to protect people?” she asked.

Spokesperson of Salinlahi Alliance for Children’s Concerns, Reina Requioma also pointed out that Aquino’s inability to make sound decisions and take accountability in cases like the Mamasapano is more than enough to conclude that he is incompetent to lead the country.

Requioma said that the Mamasapano is not a simple terrorism issue. It is an issue of capability to protect civilians, especially women and children.

She said, “There are more or less 1,000 elementary and high school students who were displaced because of the Mamasapano incident. Only 200 were able to go back to school,” adding that aside from displacement and disruption of classes, children also continue to suffer from the trauma that encounters and militarization had caused them.

People’s Transition Council: Who are in?

Aside from calling for the immediate resignation of Aquino, women leaders also urge the public to support the formation of People’s Transition Council, and the Truth Commission, which will conduct thorough investigations on Aquino’s crimes including his involvement in the Mamasapano incident and the implementation of DAP.

Salvador said the people, especially women, are hesitant to call for Aquino’s resignation because of lack of a worthy alternative.

“Many are wary with the prospect of having a constitutional line of succession, especially since the personalities involved are not clean, to say the least. We are thus pushing for the People’s Transition Council to usher in a change in the rotten political and economic system,” Salvador explained.

Salvador also added, “The proposed council greatly differs from alternatives proposed by other groups because the demand comes from the basic sectors – farmers, workers, urban poor, students, and the middle class – and not from the few elite personalities whose ulterior motive is to regain power. The People’s Transition Council is the real people power.”

When asked who the women leaders see as potential member of the council, Salvador answered: “We invite and at the same time challenge Senator Grace Poe to continue her quest for truth by joining us in calling for Aquino’s resignation, and perhaps be part of the council that will lead the country in transition. We recognize her efforts to seek the truth behind the Mamasapano incident during the hearing in the senate and we hope that she’d continue that.”

“We also challenge other senators and politicians, like Sen. Grace Poe to join the people in action for Aquino’s immediate resignation. The personalities who will stand by the people might be considered worthy to be part of the council,” she added.

Ilagan emphasized the need to carefully select the members of the council, as they will take on a critical role in forming a new government.

“We should carefully look into the qualifications of the people who want to be part of the transition council. They should have integrity and credibility, and should not have vested interests. They should be people who know and understand the agenda of basic sectors. It would also be better if people from various sectors will be part of the council, as they already know what their sectors need,” she explained.