The martyrs of Bud Dajo and the forgotten Moro heroes 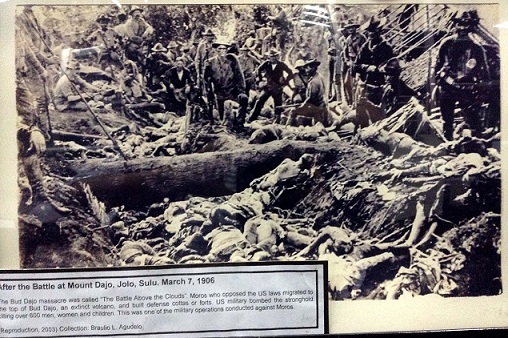 Many Moro heroes in Philippine history have been ignored and forgotten because of a legacy from the colonizers: the alienation between Christians and Muslims.

Today, March 6, the nation marks the traditional 40 days after the death of the 44 Special Action Force (SAF) men now hailed as heroes in the Mamasapano clash.

Coincidentally, the date happens to be the 109th year of the Battle of Bud Dajo, one of the fiercest and bloodiest fight between American colonizers and the resisting Moro people in the island of Sulu.

Some historians called it the Bud Dajo Massacre, where some 1,000 Moros of the Tausug tribe, most of them unarmed women and children, were killed by 790 American soldiers who attacked their fortification in the volcanic crater of Bud (mountain) Dajo, 10 kilometers from the present-day Jolo city.

Although they valiantly fought the American colonizers — and were even declared “martyrs of freedom” — these Moro heroes in history are largely forgotten, specially with the resurgence of Islamophobia, and efforts by some politicians to pervert the Moro peoples’ struggle into terrorism.

“Muslim resistance and the heroes of that resistance should be celebrated in Philippine history. Instead, they are largely ignored and misunderstood,” said the late historian and nationalist Renato Constantino in his book “The Philippines: A past revisited.”

“For example, the Muslim attacks on Luzon and the Visayas, which the Spaniards called piratical wars, must be viewed as part of the Muslims’ continuing resistance to Spanish colonialism,” wrote Constantino.

“The Muslim South became a beleaguered fortress, a sizeable segment of indigenous society that tenaciously resisted Hispanization and colonization. Because of its consequent isolation, it was able to preserve its indigenous customs and culture as well as to continue to receive Muslim influences,” said Constantino.

Hannbal Bara, a dean of the Mindanao State University-Sulu, in his article “The History of the Muslim in the Philippines,” in the National Council for Culture and the Arts (NCCA) website said that the Moros have “so far the longest political experience compared to other groups in the whole Philippines,” with 500 years of political history.

While communities led by datus in Luzon and Visayas were pacified by the Spanish colonizers, the Sultanate of Sulu, and other Moro groups under the Maguindanao and Buayan chiefs have resisted and prevailed.

The “Moro” identity was given by the Spaniards “only on account of their Islamic ideology and their culture being similar to the Moors who conquered Spain,” Bara said.

“It is this Islam that actually produced heroic resistance against western colonialism,” wrote Bara. “The Philippine Muslims today became known as cultural communities owing to their culture surviving foreign hegemonism to this day.”

When the Americans came, the Sulu sultanate was already weakened, but the Moros had no want of valiant leaders. One of them was Panglima Hassan, who led a force of 3,000 warriors to attack the American garrison in Jolo in 1903. Their siege lasted for a week before they were pushed back.

In his article, Bara wrote that Hassan’s offensive won the sympathy of the masses, and inspired them “to resist the US colonialism.” Hassan toured Sulu to propagate his cause.

“The Americans were portrayed as the enemy of Islam; that they came to the Muslim land in order to continue the unfinished goal of the Spanish colonialism,” wrote Bara. “The Muslims became apprehensive when the US forces hoisted their flag in major centers and further required the Muslims to fly the US flag in their ships. At the same time, they introduced a new land system in order to facilitate the collection of land taxes from the Muslims. These policies invited antagonism from the people.”

After Hassan, three other Moro leaders boldly opposed the American occupation and policies: Imam Sahirun, Ma’as Abdullatif, and Panglima Sawadjaan. These men fortified themselves in Bud Dajo along with their followers, and refused to recognize the US colonial government, Bara said.

Eventually, the Americans decided to put a stop to their defiance.

On March 5 to 7, 1906, the offensive on Bud Dajo was led by US Army Col. JW Duncan, upon orders from Gen. Leonard Wood, the governor of the Moro province.

“Using high powered guns, the US army stormed the Muslim strongholds with mortar throughout the afternoon and gradually took a closer move in the evening. The Muslims armed only with kris used an indigenous approach of warfare by using logs rolled off from the top intended to hit the advancing US troops who tried to approach the narrow passage from the slopes of the mountain. From the Muslim accounts, a great number of US forces were killed as the logs fell down one after the other from the mountain tops. The US army, however, succeeded in getting to the mountain top. In the early morning of March 7, 1906, the US army fired upon the Muslim camps at close range. The Muslims rushed in and fought decisively in the open field. Only six survived who managed to retreat and report the news of what transpired in the so called battle of Bud Dahu.”

Seven years after Bud Dajo, another cotta (fort) war, the “Battle of Bud Bagsak” happened in Sulu in June 1913, with the same bloody results.

In 2006, the Philippine Senate made a resolution declaring the Moros slain in Bud Dajo as “martyrs of freedom.” March 6 was also declared as Bud Dajo day “in remembrance of their supreme sacrifice that the defenders of Bud Dajo made for the love of their homeland.”

As the Moros of Mindanao have preserved their territory and culture against the colonizers, they were not considered part of developing society, and they felt the same for the rest of the archipelago, said Constantino.

“Whatever ties of race and culture had previously existed were replaced by suspicion and antipathy since Christianized natives were regularly conscripted for the wars against the Muslims and, in retaliation, the latter also raided the Christianized communities. Thus Spanish colonialism left a legacy of alienation between Christian and Muslim.”

“American colonialism continued the process of pacification with greater success only to add an economic dimension to the old animosities when Christian settlers began to encroach on Muslim ancestral lands,” said Constantino.

Moros are still pitted against Christians, now, in the “War against terror” context. Heroes and martyrs are still made out of those who fall in the battlefield. But the many Moros who died throughout history may just remain forgotten, until their right to self-determination is actually recognized.