Fr. William Tadena | ‘Please keep him in your hearts and minds’

MANILA — Willianne Ruth Tadena sat next to the center aisle of a chapel in La Paz, Tarlac, at a mass in tribute to her father, the late priest William Tadena. Right after receiving communion, people approached her to either tap her shoulder or gently touch her forehead. She gave them a beaming smile.

Her mother, Bernadette, was eight months pregnant with her when Tadena, a priest of the Iglesia Filipina Independiente and a staunch supporter of the Hacienda Luisita farmers, was killed.

Willianne, now nine years old, never saw her father. But she learned about him, not only from relatives, but from stories told by poor peasants, whom her father joined in struggle.

“I never saw my father but he still lives in my mind. My mommy and my grandparents would always say that he was a loving father,” she said.

Tadena was killed by a suspected military death squad on March 13, 2005, after celebrating mass in an IFI chapel in Guevarra village in La Paz. It was also the venue for the commemoration. A commemorative marker where Tadena was shot was unveiled.

“No one held personal grudges against Padre (Tadena). But he was a thorn on the side of the landlords and the capitalists,” Florida Sibayan, chairperson of peasant group Ambala, told Bulatlat.com.

Sibayan deplored the elusive justice, not just for Tadena, but the peasant supporters who were killed after the Nov. 16, 2004 Hacienda Luisita massacre, where state forces opened fire at the farm workers’ picketline and killed seven strikers.

Apart from Tadena, there were more peasant leaders and supporters of the Hacienda Luisita farmers who were slain shortly after the massacre. They were: Tarlac city councilor Abel Ladera, Bishop Alberto Ramento, who is also from the IFI, union leader Ric Ramos, peasant leaders Marcelino Beltran, Ben Concepcion of Pampanga, and Bayan Muna leader Flor Collantes.

Striking farmers George Loveland and Ernesto Ramos were wounded when they were shot by President Aquino’s bodyguards.

Fr. Jonash Joyohoy, executive director of the Ramento Project for Rights Defenders, the IFI’s advocacy arm on human rights, said that although the supposed gunman behind Tadena’s killing was convicted and sent to the National Bilibid Prison, it was for a different crime, not in connection with the Tadena’s case, of which he was acquitted.

Sr. Cecille Ruiz of human rights group Karapatan – Central Luzon told Bulatlat.com that the human rights situation in the region has not improved under President Aquino. And as expected of a landlord president, she added, most rights violations in the region are due to land disputes such as in Hacienda Luisita and in Hacienda Dolores.

“The justice system grinds ever so slowly in the Philippines. While we can avail of the legal means, there should still be a strong mass movement to struggle until justice is served,” she said. 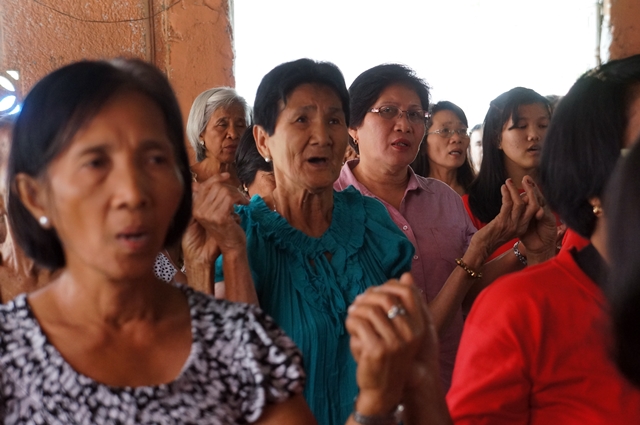 Ruiz described Tadena as a priest with such a “positive outlook” in life. He was cheerful and committed to his vision as a priest, she added.

Very Rev. Eleuterio Revollido recalled that after the strike at the Hacienda Luisita, Tadena asked his parishioners at every Christmas dawn mass to offer rice to support the farm workers.

Such commitment to the farmers, Revollido said, is a testament to the Church teachings that “serving God is meaningless if you are not able to help others. Every minute spent in reaching out to others is equivalent to serving God.”

“Christians are always called on to share, despite threats, despite fear,” he said.

Pol Viuya of Bayan-Tarlac said church workers play a big role in the people’s struggle. He said that peace should be based on justice.

“But as long as we have the likes of the United States intervening in our country, we would never have peace,” he added.

Willianne believes her father would be proud of his children as they are doing very well in school. She has two other siblings, both are in college. They’re intelligent, she said, which she attributed to both her mother and father.

She, for one, is a consistent top student since her nursery school. Asked what her favorite subjects are, she answered quickly: math and language.

Her mother Bernadette is now working in Dubai as a nurse to send all three of them to school.

“He was very hardworking. He was a good cook. He loved to cook vegetables,” Angelina Pascua, Tadena’s mother-in-law, said, “Whenever he was home, he would do all the household chores. He would not stop until everything is finished, from washing the clothes to cooking.”

During the homily, Joyohoy, who is also the chairperson of the Council of Priests, said there is a need to continue commemorating the brutal killing because the fight that Tadena struggled for continues to this very day.

“He did not just die. He was killed,” Joyohoy said. Those behind the killing was angry at Tadena, not for any “personal grudge” but because he fought for the marginalized.

Tadena was faithful to his ministry as a priest, in pushing for a just society and to the revolutionary tradition of the IFI, said Joyohoy.

More than that, he added, Tadena was a man of principles.

“Land should not be owned by few families. Let us remember that land ownership is rooted in violence and foreign domination. It is rooted in injustice,” Joyohoy said.

Willianne called on church workers to keep her father’s memory alive:”Please always keep him in your hearts and in your minds.”

At the end of the program, IFI general secretary Bishop Joselito Cruz asked who would answer to Willianne’s call.

Everyone raised their hands.