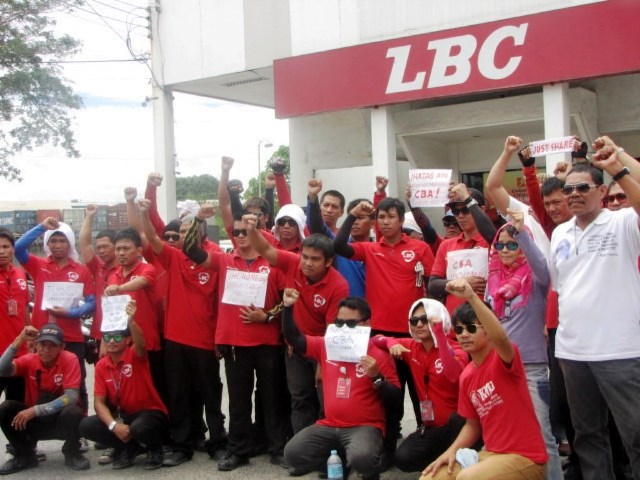 DAVAO CITY – Members of the LBC Davao Employees Union held a protest action during their lunch break on Tuesday.

The workers pressed for their demands of 7 percent salary increase among other benefits. On March 16, the collective bargaining negotiations between the union and the management reached a deadlock after the employer refused to agree with the union’s proposals.

Butch Gajudo, president of the union said on Tuesday they are merely demanding their “just share of returns” from the management. He said LBC has remained rigid in its 3 percent salary increase counter-proposal, a move which he said led the union to declare the negotiations as pointless.

The 3 percent salary increase would add only around P9-13 pesos daily, a figure the union considers inadequate given the difficult economic situation today.

These are not enough, Gajudo said. Citing the company’s financial statements, the union leaders believe it is more than capable of giving their demanded share of the company’s gains.

Gajudo said the overall proposal would cost LBC P3.15 million out of its accumulated net income of P56.85 million over the last two years.

Gajudo added that LBC’s refusal to yield to the workers’ demands have also deadlocked negotiations outside the Davao area, particularly in Bukidnon and Cagayan de Oro.

Carlo Olalo, spokesperson of KMU-SMR, called on the LBC management to respect the workers’ right to collective bargaining as enshrined in the ILO Convention 98. “Move past your greed and excessive love for profit and give the workers their just share, which you can readily provide,” Olalo asked LBC.

The union appealed to the loyal customer of LBC Davao to try and understand their situation and support their call for the just and reasonable collective bargaining agreement. Reposted by