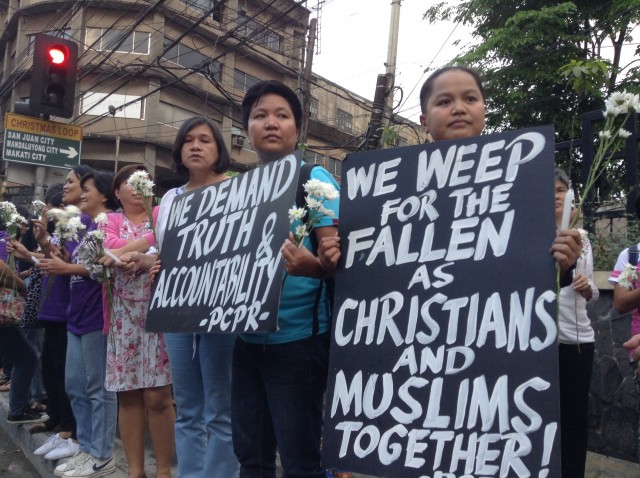 “It is not enough to say ‘I am sorry.’ Someone should be held accountable.” – Bishop Broderick Pabillo

MANILA – President Aquino has yet to apologize over the botched police operation but Bishop Broderick Pabillo said even that will not suffice.

“It is not enough to say ‘I am sorry.’ Someone should be held accountable,” Pabillo said during the homily in a mass at the Divine Word Shrine in Christ the King Seminary in Quezon City.

Today, Mar. 25, is the second month since the Mamasapano clash that cost the lives of 44 elite police forces, 18 Moro fighters and five civilians.

The tribute mass coincided with the Church’s celebration of the Feast of Annunciation, when Mary agreed to conceive Jesus. Pabillo said the feast reminds everyone of Mary’s willingness to give up her own interests for the common good and her humility – two qualities that the bishop found wanting among the country’s leaders.

The mass was attended by church workers, activists and representatives of progressive partylists. The mass ironically concluded with the singing of “Pananagutan.”

Pabillo called on Aquino to listen to the calls of the people. He noted that there are varying calls, from demanding his resignation to coup de etat. But it would boil down to the call for accountability and transparency.

The bishop called on the people not to forget the past misdeeds of the Aquino government – from the pork barrel scam, to the failure to enact a genuine Freedom of Information law, and the doubts on the credibility of the upcoming election.

“How can we attain justice if we do not know who should be held accountable?” a message of one of the SAF widows stated. The said message was read during the program.

In a short program held outside the church, members of progressive groups lit candles in memory of those who were killed in the botched police operation, reportedly funded by the US government.

Renato Reyes, secretary general of Bayan, said two months have passed and yet the government has yet to fully provide an explanation.

“Everyone seems to be at fault but not the president,” he quipped.