A young man’s suicide and a new generation 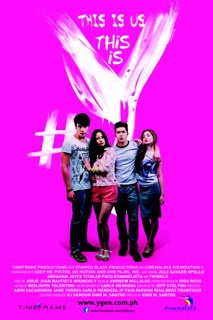 “#Y” is the enigmatic title of a film by Gino M. Santos, a young director whose film ”The Animals” for an early edition of the Cinemalaya Film Festival had called the attention of certain Manunuri reviewers. “#Y” is a highly accomplished work that bids notice that Santos may very well, without apologies, take his place among the new stalwarts of Filipino film art. His new work features fine performances by the main cast, flawless editing, relevant use of sound and music, and excellent cinematography, all marks of a young director who has mastered his craft and art.

Initially, we are made to expect that we will be given a clinical report on the case of one suicidal young man, but the narrative brings in Mile’s friiends and other young people.

Janna is dragged to Sunday mass, and her thoughts during mass reveal her inability to find any spiritual worth in religion. In her chatter on separate occasions, with Miles and Lia, we learn about casual sex as part of her young life. She jests with Lia, calling her a “Flying V” for her insistence on remaining a virgin before marriage. In the barkada, Ping is the expert on easy sex and drugs. He angrily reproves Lia for not going all the way in their necking, accusing her of making him jerk off by himself when, as his girl, she should be doing it for him.

Outside of his barkada, Miles finds contact with two other individuals who were aware of his suicidal tendency. The first is Annie, a counsellor from Life Foundation, who genuinely becomes concerned with his problem but only by phone. The other is a man we do not see, a therapist who listens to what Miles relates but without any of the concern the that Annie shows. In college, the absence of personal contact is manifest in the Literature teacher who has put up with students who do not respond to his query about assigned readings.

The barkada narrative closes with the death of Ping when in drunken fury he gets off Miles’ car and gets hit by a passing car, and after the funeral, Miles makes guilty love to Lia in the latter’s room. In the closing scene of the film, Miles is at the rooftop talking to his cell-phone, delivering his farewell to friends and parents, and then taking his death-plunge. Here we have the culmination of the theme of the absence of personal contact as symbolized by the cell-phone.

The title of Santos’ film, “#Y”, we are made to understand, does not call attention solely to Miles’ story. It calls attention to Mile’s generation – Ping, Janna and Lia and the young people they represent – and the cultural malaise that affects upperclass youths of our times.

* Bienvenido Lumbera is a National Artist for Literature.