You Are Here: Home → 2015 → August → 5 → NDFP slams Aquino for insults, arrests of consultants to peace talks 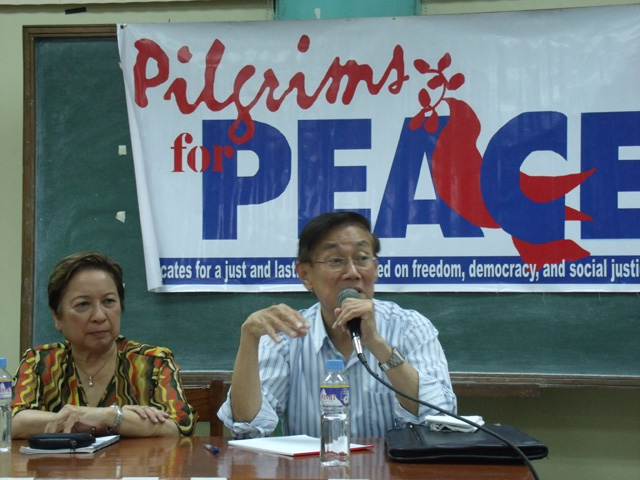 “This is a very bad sign for the peace talks.”

MANILA – The chief negotiator of the National Democratic Front of the Philippines (NDFP) criticized President Benigno Aquino III for being muddleheaded.

Pitao, along with an NPA medic, was killed by government troops while being treated for several illnesses on June 28 in Paquibato, Davao City.

The Tiamzon couple, meanwhile, was arrested in March 2014 and has been detained at Camp Crame.

“This is a grave insult to Ka Parago who was hailed by more than 10,000 people in Davao at his wake. This is also an insult to comrades Benito Tiamzon and Wilma Austria and other NDFP consultants and political prisoners,” Jalandoni told Bulatlat.com in an email interview.

“This is a very bad sign for the peace talks,” Jalandoni said, adding that the statement also shows Aquino’s “underestimation of the strength of the revolutionary movement and gross disrespect for the GPH-NDFP peace negotiations.”

Concepcion “Concha” Araneta-Bocala was arrested in Molo, Iloilo last week while Ernesto Lorenzo was arrested on June 21 in Quezon City. His wife Joyce Latayan was subsequently arrested in their house in San Jose Del Monte, Bulacan.

The recent arrests, Jalandoni said, show the complete disrespect of the Government of the Philippines (GPH), Office of the Presidential Adviser on the Peace Process (Opapp), the military and police for the Joint Agreement on Safety and Immunity Guarantees (Jasig), Comprehensive Agreement on Respect for Human Rights and International Humanitarian Law (CARHRIHL) and other binding peace agreements.

Signed by both parties, Jasig provides immunity from surveillance, arrest, detention, threats and other punitive actions to all those involved in the peace talks. Under Jasig, documents of identification are issued to all the consultants and staff of the NDFP involved the peace talks.

In a statement posted on Opapp website, GPH panel chairperson Alexander Padilla said Araneta-Bocala is not covered by Jasig. Padilla claimed Jasig is “only operative to those who are using their real names and those recognized by the GPH as participants to the talks.”

The NDFP has maintained that under Jasig, the use of assumed names is allowed. The GPH has also refused to release Wilma Austria who used her real name in her Document of Identification, Jalandoni said in a previous statement.

Jalandoni lamented that all these happened after the informal talks of the NDFP panel members with House Speaker Feliciano Belmonte last month. Both sides had agreed to find ways of resuming the formal peace talks.

Jalandoni said the NDFP has informed the Royal Norwegian facilitator, Elisabeth Stallum, about their openness to the Norwegian government’s suggestion of informal talks that could lead to formal talks. Still, he insisted that the GPH should respect the Hague Joint Declaration, JASIG, CARHRIHL and other agreements.

Asked if the NDFP plans to engage with presidential candidates, Jalandoni said they are willing to have a dialogue with all of them to push for GPH-NDFP peace negotiations and to address the roots of the armed conflict, among others.

He challenged Interior and Local Government Secretary Mar Roxas to initiate the withdrawal of the DILG-DND Joint Order offering bounty of P467 million ($10.22 million) for alleged “235 wanted communists”. Jalandoni said the Joint Order, signed by Roxas and Gazmin, dated Nov. 12, 2012 is “a flagrant violation of CARHRIHL, JASIG, and International Law, such as the International Covenant on Civil and Political Rights.”

The order has been used as a basis for the awarding of bounty for the arrest of Araneta-Bocala and scores of other NDFP consultants.