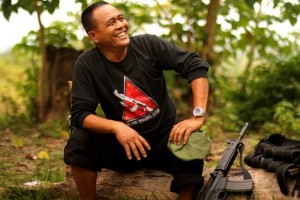 Leoncio “Kumander Parago” Pitao was being treated for diabetes, hyperthyroidism and hepatitis when soldiers of the 6th Scout Ranger Company, 2nd Scout Ranger Battalion peppered him with bullets on June 28 at around 2:30 p.m. in barangay Panalum, Paquibato district, Davao City.

MANILA – New People’s Army (NPA) leader Leoncio “Kumander Parago” Pitao was not killed in an encounter as what the military claims.

According to the NPA Southern Mindanao Regional (SMR) Command, Parago was being treated for diabetes, hyperthyroidism and hepatitis when soldiers of the 6th Scout Ranger Company, 2nd Scout Ranger Battalion peppered him with bullets on June 28 at around 2:30 p.m. in barangay Panalum, Paquibato district, Davao City.

Pitao’s companion, Vanessa “Ka Kyle” Limpag, who was nursing Pitao had already raised her hands, shouting that she was a medic, when soldiers shot her dead.

Rigoberto F. Sanchez, spokesperson of the NPA-SMR Command, said in an emailed statement, “The Philippine Army must be very proud and happy to have killed a very sick man and an unarmed medic.”

Sanchez lambasted the military for “having no regard at all for the rules of engagement under the protocols of war as specified in the Geneva Convention and the Comprehensive Agreement on Respect for Human Rights and International Humanitarian Law (CARHRIHL).”

Under the international humanitarian law (IHL), attacking persons who are hors de combat is prohibited. Hors de combat refers to anyone who is in the power of an adverse party; anyone who is defenseless because of unconsciousness, shipwreck, wounds or sickness; or, anyone who clearly expresses an intention to surrender.

The IHL also provides protection for medical personnel. Article 25 of the 1949 Geneva Convention I states,”Members of the armed forces specially trained for employment, should the need arise, as hospital orderlies, nurses or auxiliary stretcher-bearers, in the search for or the collection, transport or treatment of the wounded and sick shall likewise be respected and protected if they are carrying out these duties at the time when they come into contact with the enemy or fall into his hands.”

Sanchez said Pitao, 57, “spent the greater part of his adult life serving the people, in unstinting dedication to the cause of national democracy.” He joined the NPA in November 1978 and had been with the armed revolutionary movement for nearly 37 years.

“Ka Parago remained strong and vigilant under no less than five reactionary regimes, from the Marcos dictatorship to the current US-Aquino regime,” Sanchez said.

Sanchez said Pitao led and trained so many young warriors in the art of guerrilla warfare. These include the countless disarming operations in the 1980s and 1990s to the capture of Army Gen. Victor Obillo and Capt. Eduardo Montealto in 1999 to the raid of Davao Penal Colony and the countless tactical offensives mounted by the NPA’s Pulang Bagani Company.

Sanchez said Pitao “never turned his back to the people and the revolution.” Sanchez said the military offered Pitao “reward money” when he was detained in 1999. His daughter, Rebelyn, was raped and killed by military intelligence operatives on March 5, 2009.

“The people in Southern Mindanao remember him as their most beloved son who was always at their side, ready to help them solve their problems- -so unlike the AFP generals who do nothing but attack and burden the people,” Sanchez said.

Sanchez said Pitao had declined the Communist Party of the Philippines’s offer of sick leave. “All he wanted to his last dying breath was to live with the masses and to serve them,” Sanchez said.

In a 2011 interview with Bulatlat.com, Pitao said, “There is no basis for us to lose; the masses are ever prepared to fight. This is not a war between the military and the NPA but the struggle of the masses for genuine change and democracy.”