MANILA – When I searched for netizens’ thoughts about the commemoration of martial law last Monday, Sept. 21, I stumbled upon a number of tweets saying good things about it.

“Martial law years were better than today because people were more disciplined, there were less crimes, the economy was better,” and so on. People made comments as if they lived through those days. The commenters’ profiles, however, showed that they are young, somwhere in their early 20s or 30s and certainly did not experience one of the most horrific eras of Philippine history.

I wasn’t yet born during Martial Law either. In my history class (Sibika) in elementary, the Marcos era was highlighted with the construction of facilities such as the Philippine Heart Center, the Cultural Center of the Philippines and LRT. I recalled our teacher saying many infrastructures were built during those years. But he also said many were also killed during that time, especially those who opposed the Marcos government.

If there are so many “millennials” who are grateful for what Marcos “did for the country” – in spite of the human rights violations — does this mean that so much is not being discussed in history class these days?

“There was no freedom,” she said. So I asked if the teacher mentioned the people killed and imprisoned during those years, and she said there was none.

The League of Filipino Students in UP Diliman came up with an infographic that would probably awaken those who admire the dictatorship: 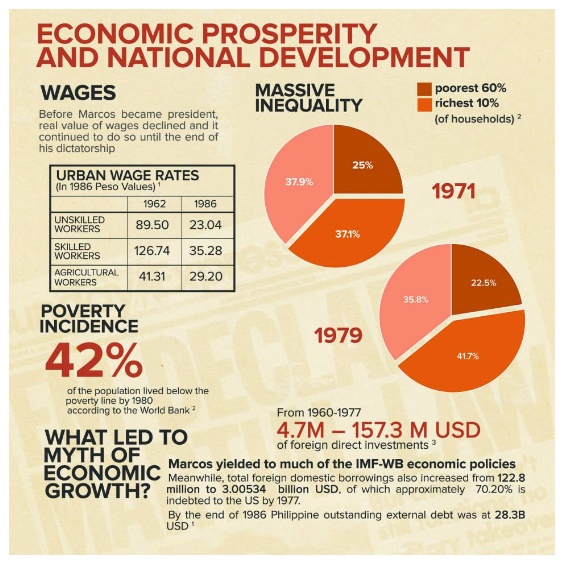 It showed the widening gap between the riches of the rich and the poorest of the poor. Wages were low, poverty incidence was high. The country’s foreign debt was the largest in Asia, and has been a legacy that generations of Filipinos continue to pay.

The LFS said that the “myth of economic growth during the Marcos era” was primarily driven by foreign investment.

“Marcos also heavily relied on foreign debt in order to implement much of his projects. The ‘growth’ under these kinds of neoliberal policies is far from inclusive and has only made our nation heavily indebted. Big businesses and the elite were the ones who benefited from Marcos’ economic policies while worsening the conditions of the Filipino people,” they added.

About the peace and order that some millenials cite, the Amnesty International said there were 70,000 arrested individuals, 34,000 victims of torture, 3,240 salvaged or summarily executed and 1,000 disappeared.

If you have seen “Sigwa,” a movie about the First Quarter Storm during the 1970s, then you would know why the youths of the 60s and 70s felt the need to revolt. Poverty was massive; there were also no jobs for the urban poor. There was political repression and those who dissented against the government were thrown in jail, if not killed. Somebody had to stand for the people’s welfare. Who wouldn’t revolt if you do not have freedom to oppose or express your opposition?

I have read one post from a netizen whose parents were both illegally detained during martial law. She did not detail her parents’ ordeal, but as a child to her parents, she is deeply hurt by what happened. She stressed that her parents’ illegal detention is a FACT (she wrote it in all caps). She said every time she sees posts or status glorifying martial law, she feel like being victimized. She said by glorifying martial law, it’s as if her pain and struggle is not real. That what happened to her parents and many Filipinos were not real. She said we live in a democratic country and everyone is free to express their opinion but she also urged those who glorify Martial Law to respect her and others’ pain as well.

Those who were tortured during the Martial Law years and have survived today still suffer some physical impairment and even trauma.

What would they say to those who say, “Forgive and move on”?

Lack of awareness of what really happened during Martial Law is alarming. What’s more alarming is that there will be no more Philippine history subject in 2016, when the senior high school of the K to 12 program will be implemented in full swing.

There is so much that we have to learn about Martial Law. Many of these stories may be discussed inside the classroom but there is more outside the four corners of your classrooms. We don’t know anything about living with curfews and with armed Philippine Constabulary roaming around the city. Many may not have a family member, or know of anyone who was a victim of human rights abuses during Martial Law, but the younger generation should hear the stories of the people who lived and experienced human rights abuses during those years.

I got to know more about the horrors of martial law when I covered the human rights beat. Many of those I interviewed for my articles about Martial Law said government was so ruthless. Protesters get beaten up, snatched, teargassed, imprisoned and tortured. Once you were identified that you were against the government, you were targeted. But the brave and daring youth did not falter and continued with their struggle.

Let’s put ourselves in their shoes and just imagine. Should I just shut up and live as if there is nothing wrong in the country, when poverty is rampant and the President, his cronies and relatives continue to amass wealth from corrupt practices?

I don’t think so.