Opening the economy further through lower tariffs not only rendered the locals extremely vulnerable to unfair competition, it hastened the Philippines’ “development” into becoming more import-dependent, with its own food supply at risk because its production sectors have shrunk through the years.

MANILA – Twenty-one heads of state are set to arrive for the APEC economic leaders’ meeting from November 18 to 19 in Manila, prompting an extensive government preparations. These include readying streets, ports, hotels and tourism sites for thousands of foreign officials, hosting meetings since January in swanky hotels of this country, drafting initiatives for finalization by the economic leaders of these 21 countries come November, and ramping up the capability of Philippine Air Force and Navy, not to mention the police, to secure these government leaders.

The hosting reportedly costs a total of nearly P5 billion of public funds, excluding the cost of constructing or repairing streets and ports.

From statements of various progressive organizations, though, APEC 2015 in the Philippines is just a costly gathering of government leaders to forge agreements that would further impoverish the masses of people in the Asia Pacific region. They branded as lies, if not outright fantasies, the claims being conjured by APEC press releases about supposed improved opportunities due to the plans and policy thrusts they are set to approve.

As far as the progressive peoples organizations in the Philippines are concerned, these “illusions” of economic growth arising from APEC agreements have been thoroughly trounced by its colossal failure in the past two decades since APEC leaders last met in this country in 1996.

In a press conference led by the umbrella alliance Bagong Alyansang Makabayan last week, leaders of various progressive organizations invited the public to their own series of meetings and conferences, street protests and caravans, to unmask and protest APEC as well as the forces controlling it and benefiting from it. They described APEC meets as lavish fiestas bankrolled by public funds and with the country’s natural resources and people’s livelihoods for their picking.

Renato Reyes Jr., secretary general of Bayan, announced that on November, as Asia-Pacific economic leaders are set to gather in Manila, activists from different regions of the Philippines and abroad are also set to arrive in the capital to protest APEC gatherings.

The protests are focused against US bases, China encroachment into Philippine territory, Canadian dumping of wastes and other “crimes” of government leaders to the Filipino people, Reyes said. 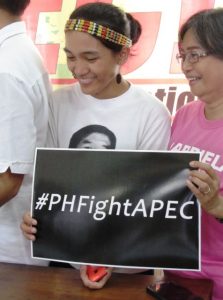 Amid meetings and conferences of government officials of APEC countries, progressive groups invite attendees to their scheduled conferences where they would detail what the Philippines has ended up with due to APEC-induced trade and investment policies. Much of these went unreported or not discussed as exhaustively as the APEC press releases in the mass media.

Since the Philippines first hosted APEC in 1996, the Manila Action Plan that was approved then emphasized wider range of trade and investment liberalization which, progressive groups said, “gravely undermined the Philippines’ production sectors.”

Opening the economy further through lower tariffs not only rendered the locals extremely vulnerable to unfair competition, it hastened the Philippines’ “development” into becoming more import-dependent, with its own food supply at risk because its production sectors have shrunk through the years.

Listening to leaders of peasants, workers and professionals, the “deindustrialization” due to APEC’s policy thrusts for neoliberal globalization has affected the people through massive loss of livelihood, plunging wages, worsening jobs crisis, poverty and hunger, increased vulnerability to natural and man-made disasters – tragedies which the people tried to cope with by increasingly finding jobs abroad, organizing and joining protests. But even in these coping mechanisms adopted by the people, governments like in the Philippines have notably reduced funding and support to migrants, and unleashed repressive measures on critics and protesters.

Liza Maza, chairperson of the Peoples’ Conference Against Imperialist Globalization (PCAIG), said that while in this regime of liberalization the services sector has experienced phenomenal growth rates, the more strategic industrial and agricultural sectors have shrunk, resulting in less jobs and lower incomes for most people.

The resulting poverty, she added, has prompted thousands of Filipinos to work abroad, and for those who protest the policies that brought this about, Maza said, the government responded not by listening to alternative policies but by unleashing political repression.

In this light, Maza called on Filipinos to join them in fighting APEC and pursuing what they call as truly just, equitable and democratic socio-economic system. This, they said, begins with implementing the opposite of policies being pushed by APEC, for example, industrialization and genuine land reform.