Their only dream is to uplift their lives, have education that their ancestors have been deprived of, live peacefully in their ancestral land and develop it for their families and the next generation.

MANILA — After five days of journey from Mindanao, through the Eastern Visayas, Bicol and Southern Tagalog regions, the 700-strong Manilakbayan finally reached the National Capital Region on Sunday, Oct. 25. 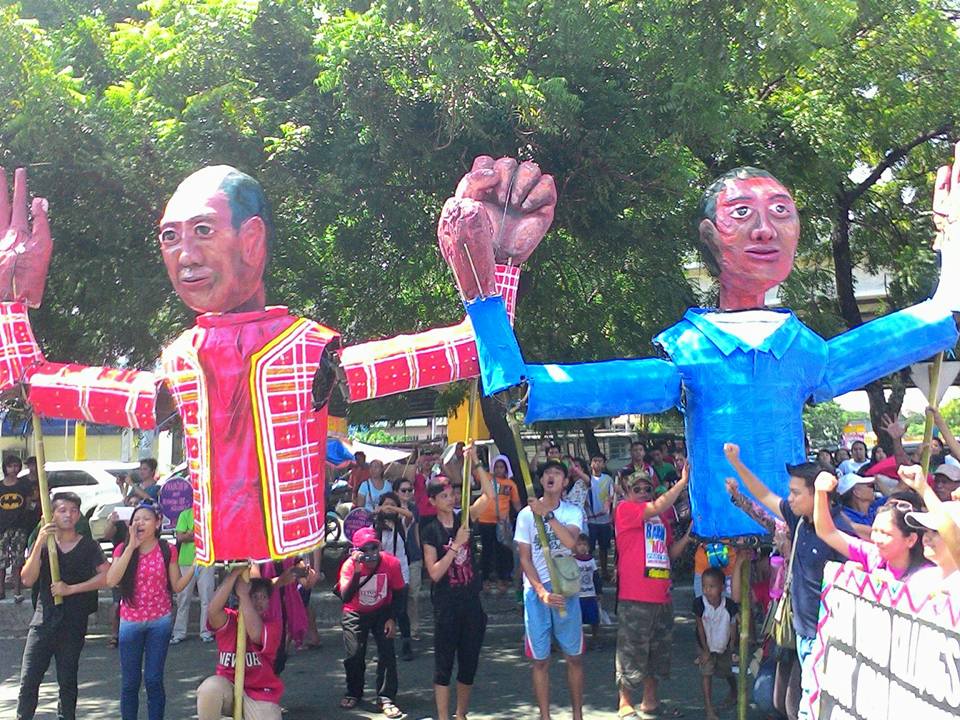 With raised clenched fists, the Lumad and other Mindanaoans, along with activists from Southern Tagalog and Bicol region marched from Bayanan in Muntinlupa. At the Alabang viaduct, they were welcomed by leaders from various groups, such as Gabriela Women’s Party, and Bagong Alyansang Makabayan (Bayan), who then marched with them all the way to People’s Park in Sucat, Muntinlupa.

At the People’s Park, they were welcomed by the Save Laguna Lake Movement.

Ronald Molera, Save Laguna Lake Movement spokesperson said they support the struggle of Manilakbayan. He said, like the Lumád, they too will be displaced from the Laguna de Bay once the government’s Public-Private Partnership project pushes through.

The group gave fish as food support for the Manilakbayan contingents.

Just four days ago, he said elements of 68th Infantry Battalion looked for him in their house in sitio Butay, Namnam village in, San Fernando, Bukidnon. Only his grandmother was there, and soldiers told her that he is a “headache.”

“The soldiers told my grandmother that I always cause them trouble, because I always talk to public,” Mandagit told Bulatlat.com. The soldiers, he added, destroyed his store.

He and his family had evacuated to the United Church of Christ in the Philippines Haran House in Davao City since June of this year due to heavy militarization. He said he wanted to go back to their community so they can continue to live normally.

Cristina Lantao, secretary general of the Federation of Lumad Women in Mindanao, meanwhile, said that they wanted to come to Manila to call on the government to act on atrocities in Mindanao.

It is her second time to join Manilakbayan. She said their situation has been worse this year. “Many Lumad have been killed. Worse, they are attacking our school, depriving our children of education,” she said.

Mandagit and Lantao said their only dream is to uplift their lives, have education that their ancestors have been deprived of, live peacefully in their ancestral land and develop it for their families and the next generation.

Tomorrow, the Lakbayanis will be welcomed by different sectoral organizations in the city of Manila. In the next few days, the Lumad will hold different activities to call for peace and justice in Mindanao.

Manilakbayan in Mindanao will be in Metro Manila from Oct. 25 to Nov. 22.