MANILA – Twenty-eight year old Alvin Delegado worked for two years at the Skyland Dole Philippines plantation in Somilao, Bukidnon. He received P230 for an eight-hour work per day. He had no benefits and no security of tenure.

Joining the #Manilakbayan2015, Delegado attended the launch of Network Resisting Expansion of Agricultural Plantations in Mindanao (REAP Mindanao Network), Oct. 28 at the University of the Philippines in Diliman. When toxicologist Dr. Romeo Quijano discussed about acute poisoning caused by toxic pesticides, Delgado nodded his head.

At Dole, Delegado would spray pesticides on Cavendish banana without any protective equipment. After about one year, he noticed that a cyst developed on the right side of his body. He said he also experienced dizziness, cough, headache, among other symptoms of acute poisoning mentioned by Quijano.

Quijano, president of Pesticide Action Network Philippines (PAN-Philippines) said agricultural corporations in the Philippines use toxic pesticides that harm the people’s health and the environment.

Quijano said that multinational companies Dole and Del Monte had been importing Thiodan (endosulfan) until 2008. Quijano said that as early as 1994, many countries banned or regulated the use of Thiodan.

According to PAN, Thiodan can cause cancer, psychiatric disturbances, Parkinson’s disease, birth defects, cerebral palsy, among others.

In his previous studies, Quijano found out that banana plantations use toxic pesticides such as paraquat, mancozeb, maneb and glyphosate. 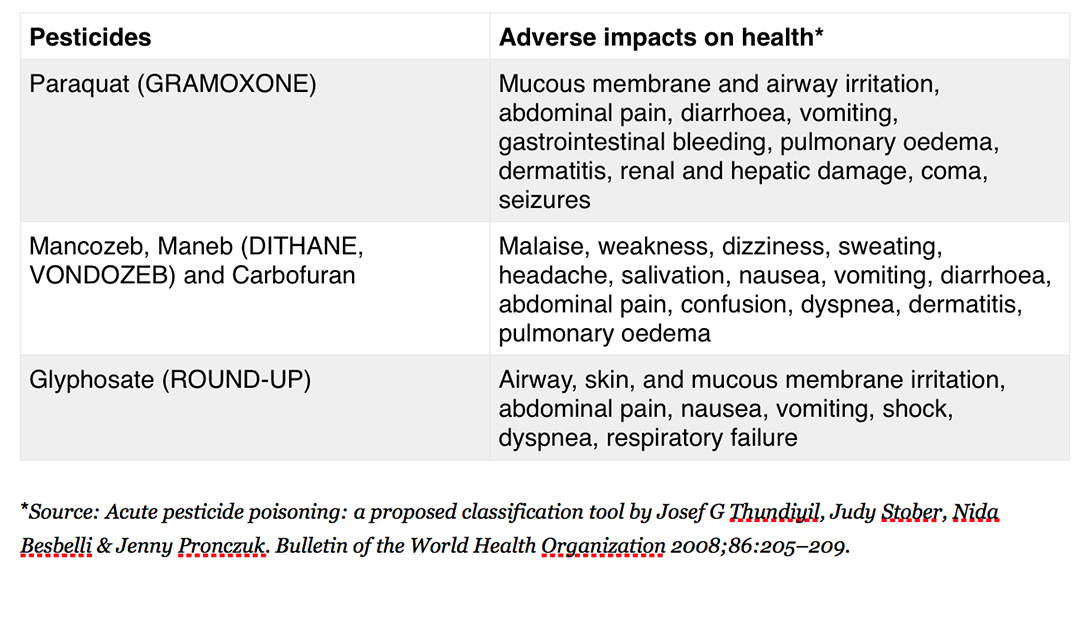 In a 2012 initial study conducted by PAN Philippines in Dole banana plantation in Surigao del Sur and palm oil plantations in Agusan del Sur, signs and symptoms of paraquat poisoning were observed among the agricultural workers. These included abnormalities of the skin, mainly on the hands and feet with signs of scarring, discoloration, loss of melanin pigmentation. Respiratory abnormalities, cardiovascular abnormalities, hypertension, neurologic signs and symptoms, and eye disturbances were also reported.

Another study on the pesticide use among farmers in Southern Mindanao published in the International Journal of the Bioflux Society revealed the use of some of the banned and restricted pesticides such as endosulfan and monochrotophos. The study found out manifestations of mild pesticide poisoning among the 701 respondents. These included skin irritation, headache, cough, dry throat, shortness of breath, dizziness, nausea and eye irritation.

Casilao said that workers at Sumifru’s packing plants in Compostela Valley get as low as P175 per day, way below the minimum wage.

Oil palm plantations in Caraga region employ children. A 2012 study by the Center for Trade Union and Human Rights revealed that one out of every four workers is below 18 years old.

Casilao added that big agricultural corporations are also notorious in violating the right of workers to form and join unions. Even if the Department of Labor and Employment (DOLE) accredited the workers’ unions, owners of these corporations refuse to recognize the unions.

Delegado hopes that their journey to Manila would bring to the fore their urgent concerns.