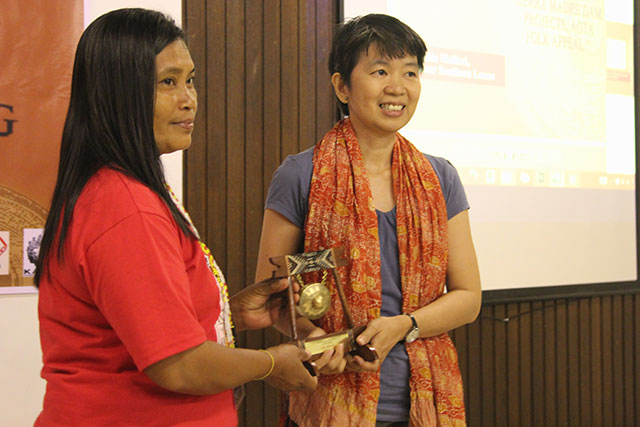 MANILA – Lumád leaders from the #Manilakbayan2015 led the Gawad Agong for Journalism, held on Oct. 29 at the University of the Philippines Diliman, in recognition of media workers’ contributions in publicizing the indigenous peoples’ issues.

Now on its third year, the Gawad Agong salutes media practitioners who report about the indigenous peoples in the country, whose issues rarely make it to the headlines.

“Because of your work, you serve as voices of the indigenous peoples,” said Dulphing Ogan, Kalumaran secretary general.

“As long as government interest is to sell our ancestral lands to big, foreign companies, in direct opposition to our interest, which is to protect and defend our territories and environment, there would be more human rights violations in the future. You are thus challenged to continue to report true stories of the indigenous peoples,” he said.


Gawad Agong gave citations to two indigenous media institutes: the Northern Dispatch Weekly (Nordis) and Radyo Sagada, both based in the Cordillera region.

Kathleen Okubo of Nordis said it was the first for them to receive an award outside of the Cordillera. Nordis started as a news dispatch in 1997, and then as weekly newspaper in 2002.

“It’s true…we bear the guilt that these stories rarely come out in mainstream media. Sometimes we lose, but we fight, sometimes we win. The efforts to share IP stories continue,” Buan said.

The following received awards and citations:

Online news: Dee Ayroso of Bulatlat.com, “Lumád women: Our place is in the struggle”

Under the project, similar awards are given by indigenous groups to journalists in Malaysia, Thailand, Indonesia and Nepal.