You Are Here: Home → 2015 → November → 11 → Polluters not paying: privatization as root of the energy crisis

Polluters not paying: privatization as root of the energy crisis

According to the 2013 report on carbon dioxide emissions from fuel combustion by the International Energy Agency (IEA), the energy industry accounted for 83 percent of anthropogenic GHG emissions in the biggest industrial countries included in the Annex 1 category, such as the United States, Canada and the European Union, of which 82 percent is from fossil fuels.

From 1870 to 2010, CO2 emissions have continued to rise exponentially, with coal representing 44 percent of 2011’s global CO2 emissions. The recent emissions increase of coal occurred primarily in Non-Annex 1 countries, which are mostly underdeveloped countries like the Philippines.

The trend of increasing fossil fuel consumption remains true for the Philippines, which currently has 32 operating coal power units whose total installed generating capacity and gross power generation is 32 and 43 percent, respectively, of the total power mix in 2014. Alarmingly, there are 47 more coal power projects amounting to 12,142 MW under construction, which comprises a huge pie in the total committed and indicative power projects at 62 percent. 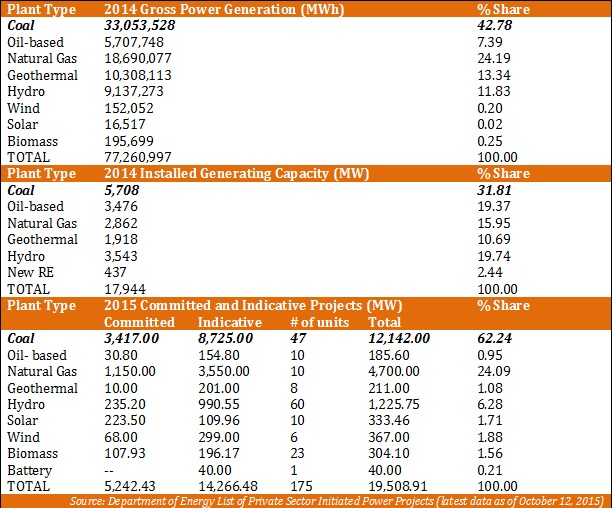 Foreign capital and production is at the core of the coal industry in the Philippines. The latest data of the Department of Energy shows that coal consumption is driven by import interests, as 11.89 out of the 16.16 million metric tons of coal consumed by the country in 2012 was imported from Indonesia, Australia, and Vietnam.

The Mabalacat Pampanga coal power plant co-owned by the Taiwanese Formosa Heavy Industries Corp. purposefully supplies electricity to its TECO Industrial Park, a pattern which businessman John Gokongwei is following in his aim to construct a 600-MW coal power plant in the Batangas City Industrial Zone, where it owns a number of manufacturing plants.

The expansion of dirty coal—a threat to people’s health and the environment aside from a driver of climate pollution—is not the only alarming trend in the power industry. A corporate-driven national power policy and program makes even clean and renewable energy projects anti-people and anti-environment.

‘Old’ renewable projects have known environmental and social impacts but are still pursued by private power producers. A geothermal project expansion in Negros Oriental by the Lopez-owned EDC has cut 576 trees in the watershed, while another project owned by Aboitiz that straddles across the borders of Zambales and Pampanga has already been approved without consent from indigenous people’s communities it covers. Meanwhile, six major large dam projects located in the provinces of Iloilo, Tarlac, North Cotabato, Bukidnon, Rizal, and Quezon threaten massive forest loss and displacement of indigenous people’s ancestral domains and livelihood.

Even the ‘new’ renewables are being implemented aggressively at the people and environment’s expense. There are at least two known solar farms to rise above disputed agricultural lands originally slated for land reform distribution to peasants in Hacienda Luisita, Tarlac and Victorias City, Negros Occidental.

Solar plants are also to rise in the Clark Green City, a project land-grabbed from indigenous communities, and another in Currimao, Ilocos Norte where the project seeks to cut into at least 700 trees from a forest park. A wind farm also attempted to encroach into the ancestral lands in Besao-Sagada, Mountain Province.

The energy privatization policy regime is the root of this energy situation. The Electric Power Industry Reform Act of 2001 (RA 9136) or Epira and other power privatization policies facilitated the wholesale of virtually all power projects to private business interests, and prevented the state from being able to construct its own power facilities and effectively regulate independent power producers.

Leon Dulce is the campaign coordinator of the Kalikasan People’s Network for the Environment.
This is the second of four parts of a series on the Filipino people’s struggle to confront the climate crisis on the road to the APEC and COP 21 international summits.

Please read also First part: A deluge of crises: the roots of our climate vulnerability
Fourth part: A world to win: people’s actions on climate change