Science for a sustainable future

For the second time, scientist-activist group AGHAM participated in the commemoration of World Science Day for Peace and Development (WSDPD) last November 10. The WSDPD was initiated by UNESCO back in 2001 to raise public awareness on the importance of science and to bridge the gap between science and societies.

WSDPD is celebrated by different institutions, universities and NGOs worldwide who support the advocacy to use science as a vehicle for development and peace-building. This year’s local celebration was made possible through the efforts and support of the Institute for Science and Technology Research of the Polytechnic University of the Philippines, Agham – Advocates of Science and Technology for the People, PUP College of Science, College of Computer and Information Sciences, College of Engineering and Agham Youth – PUP Chapter. 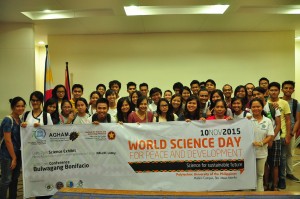 Science for a sustainable future

The international theme this year was “Science for a sustainable future,” highlighting the role of science and technology in the development of the global economy, without sacrificing the integrity of our natural resources.

In line with this year’s theme, an exhibit was mounted that aims to show how science and technology can be used to achieve a sustainable future. Our friends at AGHAM mounted a photo exhibit featuring our activities such as the People’s Science School Program, which mobilizes scientist and student volunteers to provide basic science education to local communities, and Environmental Investigation Missions to aid communities in their campaign to oppose destructive and pollutive projects such as large-scale mining and bioethanol plants.

The exhibit also featured inventions and innovations by PUP students. Among these was an automated bioplastic producing-machine, which uses banana peels as raw material. The students also demonstrated the operation of an improvised quadcopter (a helicopter-like device operated by four rotors) for disaster response, which was an ensemble of cloth hangers, a second-hand CCTV camera and a Raspberry Pi computer. It is piloted using a remote-control previously used to operate a toy copter.

A research poster presented by PUP science students picked my interest. It was about the development of a web-based software that uses historical farming data to produce a crop calendar for farmers. The students noted that they are still at the process of improving it as a part of their undergraduate thesis. While it is delightful to know that Filipino students have the astounding capacity to develop such useful researches and innovations, it is, at the same time, disappointing to realize that the fate of the majority of these masterpieces will only gather dust in a stockroom somewhere.

In a forum on the latter part of the day, one of the top scientists in the country, Dr. Giovanni Tapang gave us an overview of the sorry state of science and technology (S&T) in the Philippines. He pointed out that the lack of government support and low priority on research and development (R&D) is one of the reasons why local researches and inventions failed to be used in local industries. According to latest figures, the total amount of expenditures we allocate for R&D as a percentage of our Gross Domestic Product has been decreasing since 2002 at about 0.12%. This is way below the level prescribed by UNESCO, which is at least 1% of a developing country’s GDP.

Even worse, until now there are no basic and heavy industries in the Philippines. For instance, the student-developers of the bioplastic machine can never see it be used for industrial purposes since the existence of bioplastic manufacturing plants in the country is practically non-existent. The local industry has no capacity to produce complex industrial and consumer goods such that machines and electronic products are all imported abroad.

Dr. Tapang said that the prevailing backward and stunted S&T is a result of the agrarian and pre-industrial characteristics of our economy. This is also stifles the potential of our scientists and technologists.

We in AGHAM believe that the only way to address this is through the fulfillment of national industrialization grounded on genuine land reform and agricultural modernization in the Philippines. Only through this can we hope to escape the quagmire of poverty and stunted development of S&T in the Philippines. A serious review of world history would prove the efficacy of this strategy.

APEC and its dangers

Dr. Tapang warns that the renewed globalization agenda being pushed by APEC will surely extinguish our opportunity to realize an industrialized Philippines. Under this scheme, our economy will be further opened-up to allow the free flow of goods and human resources as a part of a global value chain (GVC). According to him, this will further deteriorate the capacity and productivity of what little remains of our manufacturing and agricultural sectors. As Ibon Foundation points out, from 1996, the share of manufacturing industry to the Philippine GDP dwindled from 25.4% to 22.6% while that of agriculture shrank from 21% to 10% during the same period.

Aside from this, APEC also plans to push for public-private partnerships (PPP) to support the commercialization of science and technological innovations. We’ve seen how PPPs in services such mass transport and medical care resulted to the inaccessibility of both. Should science and innovation in our country fall under this same framework, Trans-National Corporations will only buy and support research and development efforts that they deem beneficial for their interests. This market-oriented perspective will divert our scientists’ and engineers’ efforts from solving the most pressing problems of the masses toward producing profitable and bankable products and methods.

At the end of the forum, Ms. Finesa Cosico, AGHAM’s Secretary General, underscored the need for young scientists to use their talents to address the needs of the most marginalized sectors in society. And to be able to truly use science and technology to realize a sustainable future for the Philippines, we should push for national industrialization and encourage scientists to immerse themselves with the masses to learn from them and be more intimately aware of their most pressing needs.

Mr. JM Ayuste is a BS Biology graduate and has been organizing science students to get involved in the advocacy of making science and technology serve for the people.