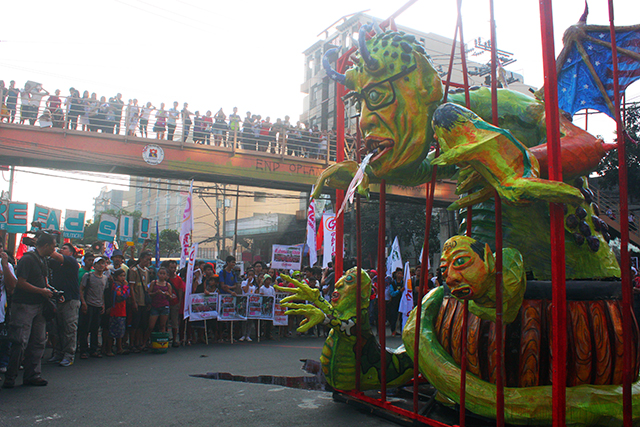 “President Aquino presented himself as a leader, but has done nothing, but follow the whims of an imperialist power.”

MANILA –On the commemoration of International Human Rights Day, a Moro group joined calls to hold President Aquino accountable as his administration committed human rights violations in the Moro lands, even while his “tuwid na daan” dangled peace.

Under Aquino, Suara Bangsamoro documented 32 killings of Moro civilians, while at least 180 Moro political detainees remain in detention at Camp Bagong Diwa in Taguig City, 80 of whom were cleared of charges in an inquiry by the Department of Justice.

“We should draw a clear line between the truths and the lies, and make the government accountable for its crimes. Aquino presented himself as a leader, but has done nothing, but follow the whims of an imperialist power,” said Jerome Succor Aba, Suara Bangsamoro national spokesperson.

The death of the government troops sparked anti-Moro hysteria, particularly among lawmakers, who took it out on the deliberations of the proposed Bangsamoro Basic Law (BBL), which will be the governing law for the Bangsamoro political entity. The BBL has no chance to be passed this year, lawmakers said.

“For five years (the Aquino administration) has served nothing but the interests of imperialist powers, while it remained deaf and blind to the plight of its people. It has stood idly by as people lost their homes, as lands were plundered, and as lives were taken with utter impunity,” said Aba.

Aba also lambasted the suspected role of US troops in the Mamasapano encounter, as well as in covert operations, in which “civilians have been illegally arrested and have died in the hands of US military forces.”

American troops are allowed under the Visiting Forces Agreement (VFA) and the Enhanced Defense Cooperation Agreement (Edca), but are banned from joining combat operations. In the past decade, activists have,however, documented cases of American soldiers seen during military operations. This year, a “tall Caucasian” was seen by witnesses as among the Mamasapano casualties.