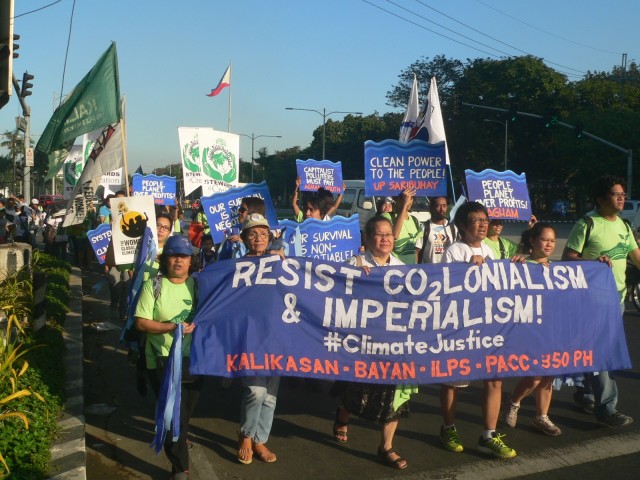 “Negotiators have failed to come up with a long-delayed climate protocol that imposes obligated, quantified, and ambitious emissions cuts on industrialized countries and their corporations.”

MANILA – Climate activists assailed the result of the 21st Conference of Parties (COP21) to the United Nations Framework Convention on Climate Change (UNFCCC), as it ended today with an agreement that allows the biggest polluter countries to get away with dangerous levels of greenhouse gases emission from industrial overproduction.

“The COP21 climate agreement is dead on arrival, as the top polluter countries have brazenly imposed their will on the 190 members of the conference,” said Leon Dulce, campaign coordinator of the Kalikasan People’s Network for the Environment (Kalikasan PNE).

“Negotiators have failed to come up with a long-delayed climate protocol that imposes obligated, quantified, and ambitious emissions cuts on industrialized countries and their corporations,” he said.

The Paris Agreement was much-hyped as the planet’s last hope to bring down rising global temperatures, to 1.5 to 2 degrees Celsius, by getting commitments from top industrialized and developing countries which are also the biggest contributors to GHG emissions.

The final agreement includes an objective to limit global warming to “well below 2C above pre-industrial levels” and “pursue efforts” to limit the temperature increase to 1.5 Celsius.

The groups, however, lamented that the agreement failed to hold accountable the top polluters, including the multinational fossil fuel corporations and the global military industrial complex.

Dr. Giovanni Tapang, chairperson of the Advocates of Science and Technology for the People (Agham) said: “What they did was leave it up to the countries, bahala na ang mga bansa kung anong gustong gawin (the countries can do what they want).”

Tapang said COP21 was a “letdown” because the US, China, European Union, Russia and Japan did not want to reduce their production and emissions.


A “bike, walk for climate justice” gathered more than a thousand environmentalists and bikers, who marched in solidarity with the protesters in Paris at COP21’s closing. The environmentalists gathered at Luneta before marching to Rajah Sulayman along Roxas Boulevard, where they were joined by some 1,000 bikers, who took off from the University of the Philippines, Quezon City.

They chanted “We have the last word: Climate justice now!”

The groups called on the public to join global mass actions to assert the need to protect the environment, and to call on governments “to put planet and people over profit.”