SSS pension hike veto, a question of: For whom? 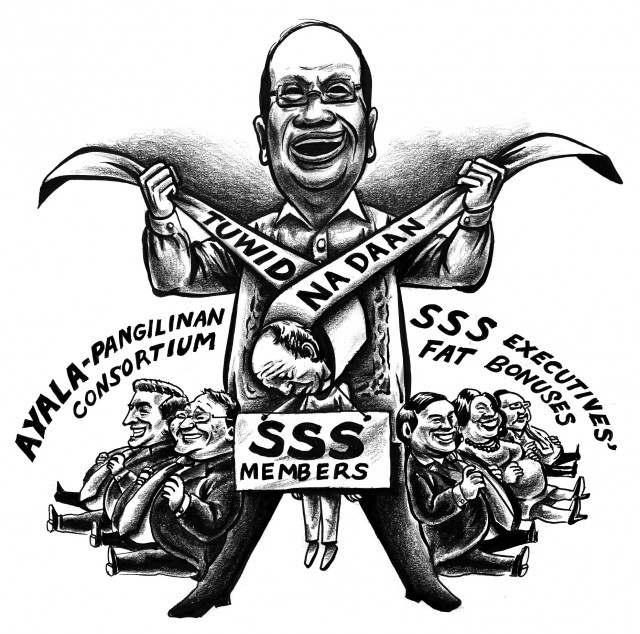 The Aquino government, executives of the Social Security System (SSS), and the standard bearers of the ruling Liberal Party Mar Roxas and Leni Robredo have been desperately trying to justify President Aquino’s veto of the bill providing for a P2, 000 ($42) hike in pensions for SSS members, which was sponsored by Bayan Muna Rep. Neri Colmenares. They, except perhaps Roxas who appears to be clueless about his dim chances of winning the presidency, know the political backlash of such an unpopular, anti-people decision by President Aquino.

President Aquino and his appointed SSS executives have been painting a grim scenario of the SSS fund drying up by 2029 if the pension hike was approved. They claim that the SSS would, if pensions were increased, incur a deficit amounting to P16 to 26 billion ($340 to 553 million) in 2016 alone.

Advocates of the pension hike, on the other hand, said the increase in pensions could be covered through:

1. Improved premium collections – While the SSS contributions of workers and employees are automatically deducted from their wages and salaries, there are companies that do not remit these contributions, as well as their counterpart. The collection rate of the SSS is said to be a mere 30 to 40 percent. A 2014 Commission on Audit report revealed that about 97,000 employers failed to remit workers’ SSS contributions amounting to P8.16 billion ($171 million).

2. Better management of funds – Anakpawis Party-list cited a 2014 COA finding that SSS has a foregone income from rent amounting to an estimated P198.2 million ($4.151 million). Advocates also revealed that the SSS has reserve funds amounting to more than P420 billion ($8.936 billion).

4. Suspension of the fat bonuses SSS executives have been awarding themselves.

5. Infusion of funds from the government – Ibon Foundation has been questioning why the government is more than willing to allocate funds for PPP projects – for example, the Aquino government has agreed to shoulder P34.9 billion ($742.5 million) or 54 percent of the total project cost of the LRT1 PPP deal with the Ayala-Pangilinan consortium – and a P30-billion ($638 million) risk management program, to cover spikes in costs of doing business of private investors, but is not willing to infuse funds to support the SSS pension hike.

Ibon Foundation has sharply pointed out that the veto of the SSS pension hike bill is not merely a question of viability of the SSS fund, but also the Aquino government’s willingness and priorities. If the Aquino government genuinely feels that a pension hike is necessary and important, it could have ordered the SSS executives to draw up a financial plan to make it happen. The plan could include the amount that the government should infuse into the fund.

What is glaringly absent in the Aquino government’s equation when President Aquino decided to veto the bill is the situation of retirees. How could retirees survive on P1, 200 ($25) monthly? That amount is not even enough to cover their food expenses, let alone rent, medicines, transportation fare, among others.

President Aquino, the members of his Cabinet, and SSS executives do not consider the situation of retirees because they have overflowing bank accounts and properties. Their future is secured and they could retire without worrying where to get the next meal or medicine.

The SSS, like its counterpart for government employees the GSIS, is, after all, a safety net, an insurance scheme, a form of assistance. And the funds from the SSS largely come from deductions from the wages and salaries of those who the Aquino administration wants to deny an increase in pensions. Denying SSS members a pension that would enable its members to live with dignity when they retire defeats the very purpose of the fund.

This is also why the decision has been called heartless. It is inhumane.

In the final analysis, when President Aquino vetoed the SSS pension hike bill, the question is: For whom? Surely it is not for SSS members who would all benefit from any hike in benefits now and in the future.