MANILA –The National Democratic Front of the Philippines (NDFP) scored Malacañang for “making false a claim” that the NDFP refused to come to the negotiating table.

Following a raid staged by New People’s Army guerrillas in Baggao, Cagayan, Palace spokesperson Edwin Lacierda said “the administration remains committed to the peace process and the rebels are the ones making preconditions.”

In a statement sent to Bulatlat, the NDFP said Lacierda should check the facts first before making any pronouncement.

The NDFP said that in October, and December 2014 and February 2015, the NDFP negotiating panel received a delegation from the Aquino administration, which was led by former Agrarian Reform Secretary, Hernani Braganza, close associate of then Interior and Local Government Secretary Mar Roxas. 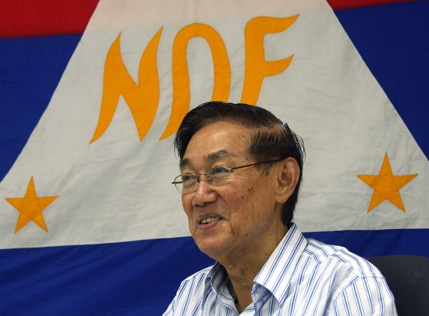 On December 8, 2014, a Draft Peace Agreement was signed by both sides, authenticated by Royal Norwegian Government Special Envoy, Elisabeth Slattum, proposing truce and cooperation within the term of the Aquino government.

On February 18, 19 and 20, 2015, Braganza’s team returned and both sides drafted a proposal for truce and cooperation to be presented to Aquino.

However, the NDFP said “these efforts were rebuffed and set aside by OPAPP [Office of the Presidential Adviser on Peace Process] Secretary Teresita Deles and not acted on by GPH President Aquino.”

The Braganza team was “disauthorized,” according to the NDFP.

“The combined peace initiatives of the Braganza team, the NDFP negotiating panel and the Royal Norwegian Government Special Envoy thus have come to naught. The responsibility lies squarely on Secretary Deles and President Aquino,” the NDFP said.

Formal peace talks between the GPH and the NDFP have been in impasse since February 2011. Several informal talks were held in the hope of resuming the formal talks but to no avail.

In its previous statements, the NDFP maintained that the release of detained NDFP consultants is not a precondition but a compliance with the Joint Agreement on safety and Immunity Guarantees (Jasig) and the Comprehensive Agreement on Respect for Human Rights and International Humanitarian Law (Carhrihl).