You Are Here: Home → 2016 → February → 27 → Aquino’s presidency is deadliest for environmentalists

Aquino’s presidency is deadliest for environmentalists

Racking up 56 cases of political killings of environmentalists in its nearly six years of rule, the Aquino administration has already surpassed the record set by the preceding decade-long Arroyo presidency in being the deadliest.

A 2014 study by international watchdog Global Witness corroborates this claim to infamy, noting that the Philippines is the second most dangerous place in the world for environmental advocates, and is in fact the deadliest in Southeast Asia.

Kalikasan PNE started to monitor the killings of environmentalists in the Philippines in 2001. Since then, it has recorded 92 cases. There may be more out there that remains undocumented.

We have not yet included the killing of Nelbert Esguiran, president of the reforestation group United Canlusong Upland Reforestation and Development in Negros Occidental in November 8, 2015, and of French national Jean Marc Messina, his wife Jewelyn Venturillo and their son last January 26, as police or independent investigations have yet to clear the motive of their cases.

Killings under Aquino down the wire

The attacks on environmental advocates continue under President Aquino. This early 2016, suspected military forces committed a series of killings and other human rights violations (HRVs) among enviornmental advocates.

A 15 year-old Lumad student, Alibando Tingkas, was killed by suspected members of paramilitary group Alamara, a known defender of mining and plantation interests in the Davao region. Christopher Matibay a 43 year-old local leader of Barug Katawhan, an organization of typhoon Pablo (Bopha) survivors in Southern Mindanao, was killed in January 18.

Next, anti-large-scale mining activist Teresita Navacilla of Save Pantukan Movement in Compostela Valley, was killed in January 27. A day after, Alex Josol was clobbered almost to death by suspected members of the Philippine Army’s 46th Infantry Battalion on Jan. 28. Josol is the chairperson of Indug Kautawan, the organization of Pablo survivors in Compostela Valley.

The Philippine National Police (PNP) this February tried to dismantle the barricade put up by residents of Bayto village in Sta. Cruz, Zambales in their bid to stop nickel mining and bar the passage of DMCI trucks into their community.

DMCI, along with three other mining companies, is extracting and shipping out nickel ore from Zambales. These mining operations have already caused widespread environmental destruction and negative health impacts to the communities.

Two community protesters were arrested and charged by the PNP for obstructing the mining operations. Several more were handcuffed and hurt by the police during the crackdown. The community barricade still holds.

The continuing killings and human rights violations of environmental activists under Aquino fully demonstrated the fascist and anti-environment character of the current administration. This deplorable impunity toes the line of the widely criticized and detested anti-insurgency program Oplan Bayanihan (Operational Plan Collective Endeavor).

Oplan Bayanihan, euphemistic on paper and brutally frank in practice, aims to weaken people’s resistance to government and corporate programs and projects in the countryside. These include the operations of large-scale mining, commercial logging, agricultural plantations, and big dams and other infrastructure.

No wonder then that most of the killed environmentalists that we recorded, which account for 79 percent of the total, are anti-mining activists opposing big mines.

In Palawan, dubbed as the country’s last ecological frontier, people opposing environmentally destructive projects such as large-scale mining, palm-oil plantations, coal power plants, illegal logging, and other forms of ‘development aggression’ have been consistently harassed and threatened with harm.

A major factor in this perpetuating impunity is the failure of government to resolve the mounting human rights violations. Aside from one case with a watered-down decision, all recorded killings have yet to be solved by the Aquino government. Almost all identified suspects and perpetrators of these killings, majority are state forces, remain at large.

The prevailing human rights situation tells us that state authorities and the legal justice system are skewed in favor of the rights violators and environmental criminals. But like those barricading in Bgy. Bayto, the Filipino people are beginning to understand that justice can only be attained in the Philippines by fighting for it tooth and nail. 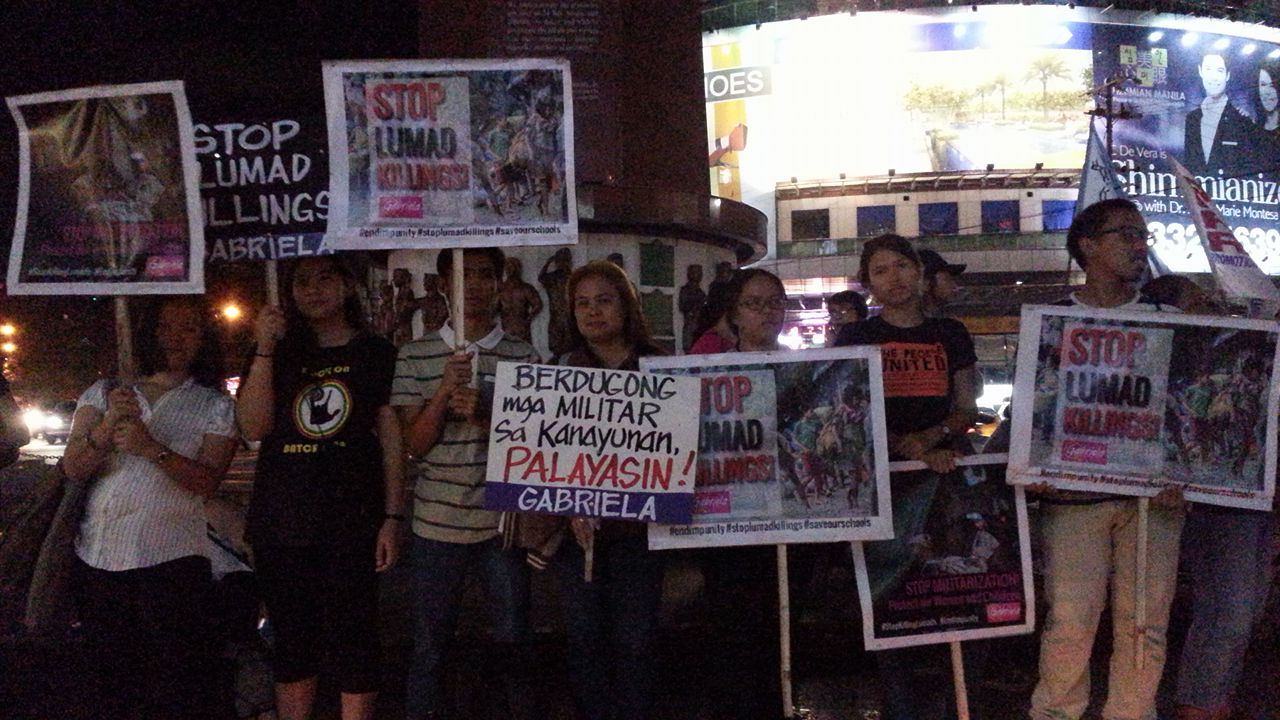 A reality that has flourished amid the state-sponsored impunity is that there are venues outside the system to claim justice that enjoy popular support.

The growing revolutionary government represented by the National Democratic Front of the Philippines and the New People’s Army (NPA), both under the leadership of the Communist Party of the Philippines, has enforced its own system of justice within their territories.

On January 14, 2016, the NPA implemented their death verdict to William Versoza in Bgy. Patitinan, Sangay Camarines Sur. On February 7, the NPA gunned down Bernabe Abanilla in Bgy. Doroluman, Arakan, Cotabato province. Both were members of the government paramilitary group CAFGU.

Abanilla, according to the NPA, was behind the killing of known anti-mining activist and Italian priest Fr. Fausto ‘Pop’ Tenorio last October 17, 2011. Versoza, on the other hand, was tagged by the NPA as the murderer of Menchie Alpajora, who was an anti-illegal trawl fishing advocate killed in July 29, 2015. The NPA said these two perpetrators were punished as part of their revolutionary justice.

NPA is also known to punish operations of large-scale mining and agricultural plantations in the Philippines, and disarm and attack military and paramilitary groups defending these destructive projects. Only this month the NDF Northern Eastern Mindanao (NEMR) Region banned coal mining in CARAGA and ordered the NPA “to carry out punitive actions to prevent coal mining companies from operating in the areas.” This they do by destroying the mining companies’ equipment, preventing its agents or administrators from entering the area and attacking its armed troops. Last December 2015 it warned giant agrocorporations like Dole and Del Monte to stop aerial spraying saying they will shoot at crop dusters aircrafts.

Revolution rages on in the countryside. It is a concrete manifestation of the people’s rejection of systemic impunity in the Philippines. The killings and other HRVs have indeed caused much loss for the people, but it has also galvanized their defense of their communities, environment and natural resources. It has not deterred the advocates and communities from asserting their rights and working toward the protection of the environment.