MANILA – Margarita Tagapan and her husband left Sipalay, Negros Occidental in 1979 when a landlord claimed the small piece of land they were tilling. They went to San Rafael, Rodriguez (formerly Montalban), Rizal, cleared forestland and made it productive.

Two of Tagapan’s four children continue to till the more than a hectare piece of land she and her husband had cultivated. The 65-year-old woman, now walking with a cane after she met an accident last year, said she continues to plant vegetables in her backyard.

Tagapan is now faced with the same situation they were in more than three decades ago in 1979. “The land has been awarded and we finished paying the amortization. But now, the clan of Mar Roxas is claiming the land again,” Tagapan told Bulatlat in an interview.

Tagapan’s farm lot is included in “Lot 23” covering 1,645-hectares in the villages of Mascap and San Rafael. Under the Marcos-era Land Reform Act or Presidential Decree 27, and the succeeding Comprehensive Agrarian Reform Law (Carl), up to 1,266 hectares have been distributed to the farmer-residents. On Sept. 3, 2014, however, the Supreme Court ruled in favor of the Aranetas, and cancelled the Emancipation Patents (EPs) of 912 farmer-beneficiaries.

Tagapan is among the hundreds of peasant women who are calling on presidential candidates to push for genuine agrarian reform.

Tagapan’s organization Amihan (National Federation of Peasant Women), presented what it called as a Peasant Women Electoral Agenda in a forum at the University of the Philippines Diliman, March 3.

According to Amihan, land reforms implemented by the succeeding administrations have been a failure, adding that nine out of ten farmers remain landless.

Soriano said presidential wannabes should realize the importance of free land distribution in economic development and in the attainment of social justice and a lasting peace.

Citing government data, Amihan said that five out of ten women working in agriculture are considered as unpaid workers.

Wage rates for women agricultural workers are 15 percent less than those received by men, based on data from the Philippine Statistics Authority (PSA).

A study by Amihan shows that rice farmers earn a daily income of P99 due to the high cost of production and the low farmgate price of palay, currently pegged at P17 per kilo.

Smuggling makes the situation of farmers even worse.

Citing data from the International Monetary Fund, Direction of Trade Statistics, Amihan said that from July 2010 to July 2012 alone, smuggling is estimated at nearly $20 billion. Amihan said 2.24 million metric tons of rice is smuggled every year. 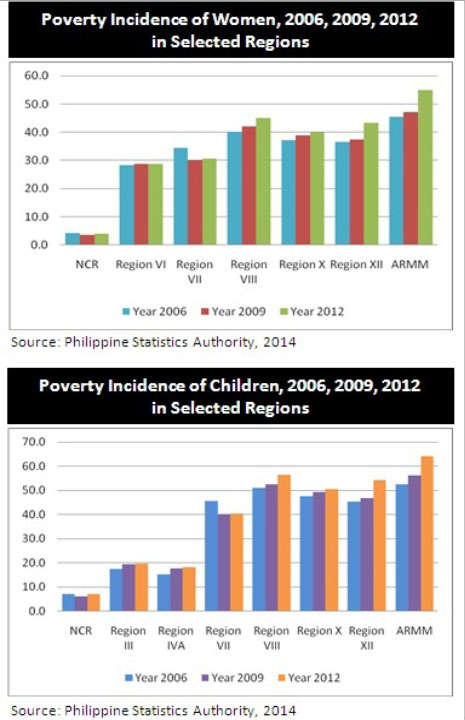 Amihan also called on presidential and other candidates to provide basic social services such as health and education.

The group noted that even as the budget for the conditional cash transfer (CCT) increased in the past five years, poverty incidence among women remains high especially in rural areas.

The group invited all presidential candidates, except for Liberal Party’s Mar Roxas, to hear their plight but no one came to the forum. Amihan said it would send a copy of its electoral agenda to the national candidates.