You Are Here: Home → 2016 → May → 8 → #BeyondElections| Where will next administration get budget for its promised reforms?

#BeyondElections| Where will next administration get budget for its promised reforms?

“The Department of Budget Management has said that as much as 90 percent of the country’s budget this year has already been released.”

MANILA — Whoever wins the presidency and takes over Malacañang next June, he or she will confront a near-empty if not already gouged out budget. In a press briefing a few weeks before elections, budget watchdog Social Watch Philippines’ Prof. Leonor Briones noted that the Department of Budget Management has said as much as 90 percent of the country’s budget this year has already been released.

Also, except for the administration candidate Mar Roxas, whoever becomes new president would have little to no time in crafting next year’s budget, Briones said. For Roxas, the budget for next year has been crafted with their programs and thrusts in mind – another president would have barely a month to craft his or her administration’s budget in time for presentation to Congress in July.

These, among others, are just some of the practical matters confronting the country’s next administration, precluding meaningful reforms for the next year even if he or she had vowed to do that.

“Candidates have made excessive promises in their platforms. How are they going to deliver on these promises?” asked Briones.

Every candidate in 2016 elections is apparently for the poor. All the leading presidential candidates have said they will continue or even expand the 4Ps program if elected. But according to Ibon, a nongovernment thinktank, 4Ps as an anti-poverty program has been a failure. Aside from increasing the country’s borrowings, anti-poverty measures such as 4Ps did not make a dent on poverty, it said.

“Despite billions of pesos spent on the Pantawid Pamilyang Pilipino Program (4Ps) since 2011, poverty remains widespread and the program is failing even on its health-related conditionalities,” Ibon said in a separate report. It urged the next administration to resist the populist appeal of the 4Ps, to reassess the program, and implement a genuine anti-poverty economic program.

But most candidates are all for 4Ps, vowing to expand or increase it and even legislate it so it would continue beyond the next administration.

Where do the candidates propose to get the funds for their promises to the poor? From 2016 to next year, Prof. Briones said the candidates’ promises today “will not hold weight,” given that this year, much of the budget had already been spent, and next year’s is practically finished or laid out already.

She said much of the candidates’ promises do not seem realistic, largely because the vows and pronouncements were not accompanied by detailed program on expenditures or concrete program on funding. 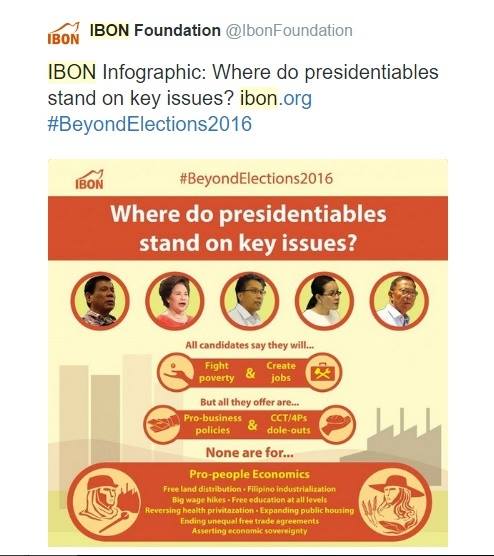 Who will bear the tax burden? A comparison of the leading presidential and vice-presidential candidates’ pronouncements revealed that “they want to reduce taxes but say no to alternatives,” Briones said.

“No one is looking at government corporations that are supposed to remit 50% of their income to the national government; at streamlining the brackets for high-earning tax payers; reforming or rationalizing excise taxes, investment incentives; and reforms in tax administration and efficient tax collection,” Briones said.

One of the biggest scandals that shook the Aquino administration was pork and the unconstitutional Disbursement Acceleration Program (DAP) which realigned “savings” and added it to lump sums under the president’s control and outside of Congress’ oversight. But among the presidential candidates, only Mayor Rodrigo Duterte and Senator Miriam Santiago have positions against pork, said Briones.

Among the senatorial bets, only a few have clear opposition to pork and lump sums, and only Makabayan Senatorial bet Neri Colmenares has the track record of having actively participated in exposing and opposing pork in the budget.

But even if pork was freed yet it only goes to fund PPP’s, various groups have also been saying it will not contribute much to realizing everybody’s hoped for change. Briones of Social Watch noted the bidding for PPPs seemed rigged. Leaders of progressive groups have previously noted that it is unjust to spend public funds on projects that private groups would run for their own profit.

As for other hoped for changes, such as having decent paying jobs, all presidential candidates signified willingness to scrap contractualization policies. “The anti-worker employment scheme spread virulently throughout the economy under Aquino,” the Kilusang Mayo Uno said in a statement. Two days before elections, three presidential candidates even signed their agreement to working to scrap contractualization if they become president.

But more than committing to that, the next administration would have to do more, according to progressive labor group KMU. For starters, it said the next administration should nix another six years of “Aquino-type policies on labor,” such as preventing an increase in wages, encouraging the spread of contractualization, and repressing trade-union rights.

In a different report, Ibon said the next administration will need to reverse the neoliberal policies of the Aquino administration to improve the jobs situation.