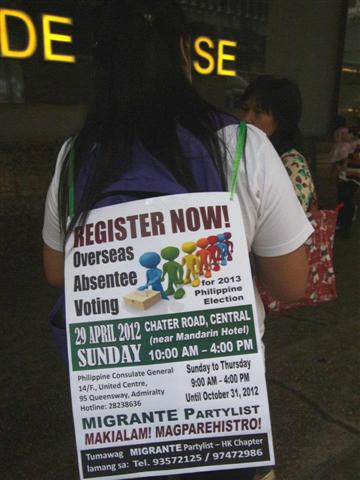 “This year’s increase in overseas voting – a whopping 285-percent increase — “is testament to how Filipinos, wherever they are in the world, thirst for genuine change.”

MANILA — The Commission on Elections said the turn out of the overseas absentee voting is “relevant” to the results of this year’s election as they are expecting to receive at least 400,000 votes.

“With over 400,00 votes from overseas, it will play a big and relevant part on who will be elected winners,” Comelec spokesperson James Jimenez told reporters here at the National Board of Canvassers at the PICC.

In an earlier statement, Migrante Partylist said this year’s increase in overseas voting – a whopping 285-percent increase — “is testament to how Filipinos, wherever they are in the world, thirst for genuine change.”

The migrant rights group had earlier assailed what they referred to as “tedious registration process” to avail of the absentee voting and other issues such as the hacking of the Comelec website, which could have discouraged them to vote.

Martinez said, “Let no one mar the 2016 polls. Our votes are our indictment of the so-called ‘tuwid na daan’. Our duty does not end with the casting of our ballots. Bantayan po natin ang ating mga boto. Maging handa tayong ipagtanggol ito, saan man tayo sa mundo. (Let us safeguard our votes. We should be ready to defend it wherever we are.).”