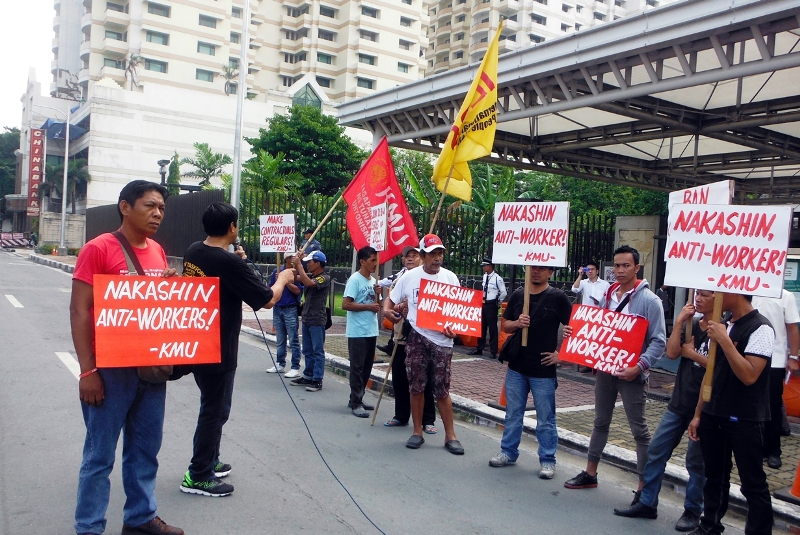 MANILA — Labor center Kilusang Mayo Uno (KMU) picketed the Japanese Embassy in Pasay City this morning on behalf of the workers of Nakashin Davao International Inc. The latter is a fruit-exporting company owned by a Japanese national. Its workers have been on strike since May 25 over the issue of contractualization. They are demanding the reinstatement of 75 workers who they say were illegally retrenched, as well as the regularization of all long-term contractuals, and the full payment of the workers’ leave and other underpaid benefits.

Elmer “Ka Bong” Labog, KMU chairperson, spoke during the picket protest to ask the Japanese government to tell their companies operating in the Philippines to respect workers’ rights.

“They must tell Nakashin to reinstate their illegally-retrenched workers and regularize all its long-term contractual employees,” said Labog.

Last April 9, Nakashin terminated 75 of its workers because they refused to sign waivers and quitclaims which would cut their record length of service in the company. The workers also previously held a protest demanding regularization of long-term contractuals.

“The 75 workers who are asserting their regularization in Nakashin have been working in the company for four to nine years and therefore deserve nothing less, but were illegally retrenched. This is clearly a violation of workers’ rights and constitute contractualization,” said Labog.
The labor center reminded the Japanese embassy that the Nakashin management is bound by Philippine labor laws to heed the workers’ demands, and that in fact it is capable of doing so.

Labog called on Filipino workers to support the strike of Nakashin workers in Davao. He added that every contractual workers’ fight for regularization “is a blow to the Aquino government’s policy of promoting and legalizing contractual employment.”